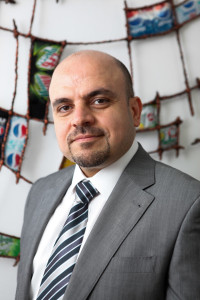 Although Dubai Refreshments has been providing the region with beverages such as Pepsi, 7Up and Miranda for years, it is likely that thirsty consumers do not give a great deal of thought to what steps are necessary for that ice-cold beverage to land in their hands on a hot Dubai summer day. Anas Taraben, CIO, Dubai Refreshments knows more than anyone, however, what it takes to keep the soft drink manufacturing company pumping our refreshments without a hiccup.

This year Taraben and the company were nominated for and won a CIO 50 award to honour their achievements in implementing a new ERP system. Hardly a simple task, the ERP system implementation project, named the Greenfield Project, was meant to update and streamline all systems throughout Dubai Refreshments and bring the company into a new era of IT infrastructure and integrated systems.

The story of Dubai Refreshment’s ERP upgrade begins nine years ago when the company was still largely on an Oracle ERP system. “The company was relatively small at that time,” recalls Taraben, “so we had gotten along without the need for a complex, integrated ERP system.” However, the days of paper transactions and systems that couldn’t share information with one another were numbered at Dubai Refreshments.

The idea for a major overhaul of IT systems began in early 2009 when Dubai Refreshments made the decision to build an enormous, state of the art bottling factory. Taraben came into the company with years of Oracle experience, but an understanding of the need to move forward. The company had grown and technology had modernised and it was obvious that there was a need for major changes.

The plan was to move from this unstructured, scattered system into a system that met the needs of each department at Dubai Refreshments. “We began the transition in the financial areas, HR and sales,” says Taraben, “Those are the three areas on which we first focused.” The plan was to implement a new ERP system while the new factory was under construction – not an easy task. The factory was slated to be the largest Pepsi factory in the Middle East.

When Taraben joined Dubai Refreshments, the company was using an older version of Oracle and the majority of business was direct sales. Everything was done with bill to bill or cash transactions. The extent of the mobility solution at the company was a hand held PDA that allowed for billing in the field. We has had some systems that were put in place with support from Pepsi International, however, there was clearly a great deal of room for improvement.

To begin the search for new systems, Taraben decided to hire KPMG as an advisor to determine the best way in which to make such an important decision. “We came to the conclusion that this wasn’t just an SAP v. Oracle question,” says Taraben, “We needed to find a solution that worked for each department’s individual needs. At the same time, we needed a solution that could be integrated.”

With their goals in mind, the company went about assessing the needs of each department of Dubai Refreshments. By interviewing players from each department, Taraben was able to build out a System of Need document, which outlined what each area needed from a enw ERP system. “We documented the requirements of each area of operations and created a huge document,” Taraben explains, “we then floated that document out on the market as an RFI.”

The result of the System of Need document was 24 responses from potential providers. From those responses, the company created an RFP for all interested vendors. “After going through the proposals, we quickly narrowed our choices down to ten possible providers,” says Taraben, “Five of those possibilities were from Oracle, and five were from SAP.”

“When we did the evaluation, we considered both the functionality and cost of implementing the system. In the end we narrowed it down to two suppliers from Oracle, and two from SAP,” says Taraben. The solutions from SAP would provide a fully integrated end-to-end solution with all modules housed under one umbrella. From manufacturing maintenance to BI solutions to mobility, SAP could meet all the needs of each department.

After much deliberation, Dubai Refreshments decided to go for a solution from SAP. The system had a strong supply chain module that was key for the manufacturing plant. Further, SAP has been in the food and beverage industry for many years and has built up a suite of tools and systems that can truly enable a company like Dubai Refreshments. “The ERP system from SAP gives us a high level of mobility and visibility which lets us see what is going on throughout the company,” says Taraben, “It allows us to monitor all the systems and the modules from one portal.”

There were, of course, a few challenges when taking on such a monumental overhaul of the Dubai Refreshment’s systems. There was the technical risks involved in getting the solution work especially when another ERP system which a high level of customisation was already in play. However, the most notable risk was mapping of the current business processes. With a clear map, Taraben was able minimise the customisation necessary and as well as the man-hours the project would take.

In addition, there was a delay on the building of the plant itself. “When I found out about the delay, I made the decision that I didn’t want it to delay the SAP implementation,” Taraben recalls, “Unexpectedly we had to make the decision to implement the new modules in phases.”

More than technical issues and delays, the biggest challenge was changing the mind set of the new products’ end users. “People are set in their ways and used to doing things in a certain manner,” says Taraben, “Still we knew that the benefits would outweigh a temporary inconvenience.”

In all, 16 modules were rolled out in what Taraben describes at a “big bang” fashion – all modules were implemented at the same time. Some of those systems were implemented for the first time in the industry in Middle East. For example the advanced planning and optimization module, supplier relationship management, business planning and consolidation, xMII Manufacturing intelligence and Integration and new mobility using SUP.

Taraben was absolutely correct in his prediction that the benefits to an upgrade would be worth the effort. Analysis and calculations that used to be pain-points for Dubai Refreshment’s various departments are now streamlined and much easier to carry out. However, keeping systems updated these days is not a one shot deal.

Companies, particularly those in manufacturing, need to stay abreast of the latest technology. “The truth is that no matter how much you update systems and implement them, your business will always demand more,” advises Taraben, “For that reason we maintain a small team that continually develops, implements and updates IT systems and infrastructure at Pepsi.”