Shoppers at the global grocery chain Carrefour come in for the savings, and leave laden down with the week’s shop. What they don’t see are the piles of paperwork it takes to keep things running smoothly. The potential for data loss when working with a paper-based system was simply too high for Ihab Damouri, GM of HR , Carrefour Middle East, to abide. He turned to technology for a solution. 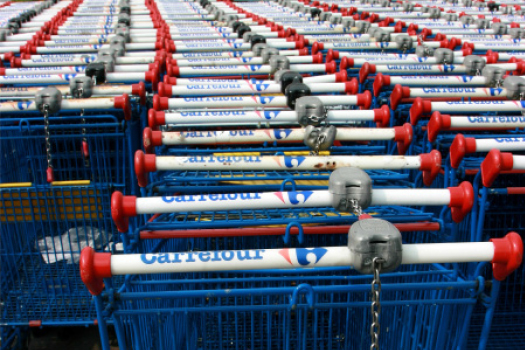 Carrefour has long been a staple for savvy shoppers in the Middle East. From electronics and appliances to, of course, groceries, Carrefour’s many locations in the region strive to provide the best quality and most diverse selection of household goods available. Globally, Carrefour is one of the largest hypermarket chains in the world, boasting 1,452 stores at the end of 2011. In 1995, Carrefour first opened its UAE business, which operates as a joint venture with Majid Al Futtaim.

With the brand experiencing healthy expansion in the Middle East, it was inevitable that certain back-end procedures would have to be readdressed and adapted to fit the needs of a growing workforce. One such issue was paper. The daily volume of documents created by the company was not yet an issue. In 2010, however, Ihab Damouri, General Manager of HR, Carrefour, saw the potential for troubled waters in the future. “The process of filing these documents by hand was simply taking too long,” he says, recalling the tedious, time-consuming tasks of filing and scheduling when he took on his new role in the Dubai offices.

Damouri realised that the company operations in Dubai needed to centralise and streamline some of its paper-based processes. “Payroll, in particular, was an issue at the time,” he says. “We had over 9,000 employees and the process was a pain point for our administrative staff.” In addition, the company needed to digitise documents to store and protect company data. Finally, Damouri and his team of 12 said ‘enough’. It was time to address the paper problem head on.

At first, the solution seemed simple – at least when it came to storing digital copies. “We bought a scanner,” he says “and began scanning documents to store them.” According to Damouri, this was the first step they took to determine if paper processes could be simplified. It quickly became apparent, however, that the volume of documents was just too much for an in-house solution. “Daily, from each store, we receive around 30 documents. If one accounts for every store in the UAE, that is around 400 documents per day. It was just too much,” he recalls.

“I was in an Aramex office when I heard about InfoFort,” says Damouri. InfoFort, an information management solutions company owned by Aramex, has been offering document management and other services in the Middle East since 1997. The company now serves organisations in the region ranging from SMBs to Fortune 500 companies. “I found out that InfoFort was part of Aramex and that it uses digitalisation to manage documents. I liked that it was a local company, and that it was part of Aramex – a company that we knew well,” says Damouri. It seemed like InfoFort could provide the solution that Carrefour needed.

No stranger to the challenges that Damouri and the HR staff at Carrefour faced, InfoFort currently digitises around 500 million documents per year. To put it in perspective, if InfoFort laid all of the documents they manage on top of one another, the stack would be almost twice the height of the Burj Khalifa and would cover an area twice the size of Monaco.

It was at the end of 2010 when Damouri called on InfoFort, and the push to unbury the staff – both in terms of workload and physical paper – began. First on Damouri’s plate was convincing Carrefour’s management team. “It was actually a fairly easy sell,” he recalls. “As soon as I outlined the cost and time savings, everyone was on board.”

From the beginning, InfoFort made themselves fully available to Damouri and his staff. “We began with weekly meetings,” he says, commenting on InfoFort’s hands-on approach. “As they began to understand our needs, and we became more comfortable with the system, those meetings became less frequent. However, they always remained within reach for troubleshooting.

“We had a very detailed filing system,” says Damouri, “with clusters within files and more.” In addition, as the nature of human resources-related documents is often private, data security was paramount. To address and support the filing system that was already in place, InfoFort offered Carrefour a customised filing solution. It was a two-sided approach, explains Damouri – InfoFort needed to create a system that addressed Carrefour’s existing system, and the staff at Carrefour needed to adjust their existing filing processes to merge with the new system.

“The company came in and implemented a filing system that not only kept our current documents in order but also allowed new documents to be organised correctly,” says Damouri. Each document was coded on its bottom edge. These codes indicated exactly where the document needed to be stored in the new filing system. This way, the time it took to locate a document was significantly reduced.

The results were immediately apparent. Most notably, the removal of physical documents from the office created more space and gave staff peace of mind. “We were no longer worried about misplacing a document and having to spend valuable time searching for them,” says Damouri. “Everything was searchable within the document management solution.” In addition, digitally filing documents went from a daunting daily task for the team, to an act that took just a few minutes. “In fact,” says Damouri, “I estimate that each staff member saved around 180 minutes per week with the new system.” Time such as that adds up and allows the staff to concentrate on improving the core processes of the department. Payroll and scheduling time was also remarkably reduced, and the department was able to generate monthly reports, which had a more accurate snapshot of their data. The project has been so successful, in fact, that Carrefour plans to roll out similar implementations throughout the region.

As for the everyday customer, we likely won’t see a direct change the next time we go shopping. However, with processes in the back of the house significantly streamlined, the benefits of a digitised, secure and highly organised filing system are sure to benefit shoppers and staff alike.