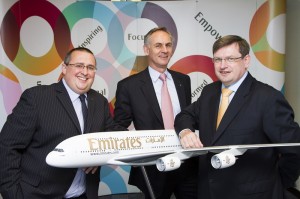 When Patrick Naef, Emirates Group’s CIO, joined seven years ago, the team had just begun rolling out its Knowledge Driven In-Flight Service (KIS), a tablet based application run on a classic .NET Windows platform designed to be the ultimate work tool for its cabin crew. The KIS tool aimed to merge all in-flight tasks onto one user-friendly device. The application involved all team and crew information, customer information, meal information, and everything in between.

Emirates claims that this technology was a huge competitive advantage in the industry, pooling all tasks onto one simple platform, improving work productivity and overall service. Therefore, it didn’t spend too much effort marketing its application. Aviation isn’t the most modest of verticals by a long stretch, but Emirates managed to keep its cutting-edge, star work tool relatively quiet throughout its early years of service.

However, one day, during the early adoption period of the first iPad back in 2010, Emirates’ IT team, along with its in-flight services team, showed their director the Apple tablet, which was immediately seen as the ultimate product with which to carry the KIS application. A light, attractive, stylish and modern device – the smart tablet was recognised as the born-to-be host for the airline’s in-house-built technology.

With this in mind, it wasn’t long before plans and production had begun to update the application. The addition of new tasks, a new user interface, new demands, and new services were being brought to the forefront for Emirates and it seemed as though the migration to iPad was just around the corner.

“We were the first airline to realise the potential of putting technology into the hands of our cabin crew. When the iPad came along, we knew that was the format we wanted KIS to be on,” says Kevin Griffiths, Senior Vice President, Cabin Crew, Emirates Group.
However, despite the fact that the iPad was available, Emirates decided to hold back and wait for something else.

“The iPad is a fantastic device, however our application was built on .NET. It’s a classic Windows application and we knew that Microsoft was on the verge of releasing something into the same market as iPad that would be so much more appropriate for what we were working with,” says Patrick Naef, CIO, Emirates Group.

“The iPad is a consumer product. We wanted an enterprise-ready, durable, and professionally developed product which could tick all the boxes for us as well as support our legacy application.”

Emirates was right. Microsoft was on the verge of releasing that software, and it came in the shape of Windows 8. The new Windows operating system had the ability to support the entire KIS legacy application whilst updating and developing the new application simultaneously.

“We all knew Microsoft was going to get there, and when it did, we were ready. We now have the best of both worlds – the legacy application which was built on .NET is fully supported, whilst the new user-interface and applications just run on top,” says Naef.
Emirates claims the richness and functionality of the application makes the simple migration toward the new devices quite complex, but the simplicity of Microsoft’s software meant that the team could complete this task in an extremely short space of time, according to Andre Wyss, Manager, Production Technologies, Emirates Group.

“It’s a legacy application and this makes these types of projects difficult. But we were able to complete it in a very short time thanks to the ease of the Windows platform,” he says.

Griffiths adds: “The legacy and background apps co-exist with the new model so the migration was seamless. It was all developed and built in-house by us because we wanted to be in control and know that we wouldn’t need extra support going forward. The intuitive nature of the Windows system made this even easier.”

Introducing the host
But with the list of specific requirements constructed by Emirates being fairly long, the device options were few and far between. It was far from just the technical side of the device that the team was searching for, so finding the right hardware vendor was a completely separate task.

“We pride ourselves on our image. We’re at the edge of technology. We wanted something that looked good. We can’t claim to be the leaders of innovation and style and then stroll through the cabin holding an old laptop – we needed something stylish,” says Griffiths.
Naef continues: “We needed something durable and sturdy, too. You’re working in a very busy environment, a restaurant environment, so the amount of devices we could choose from was limited.”

Besides the tablet itself, Emirates was also looking for a partner.

“We needed a partner to risk share, know the importance of success, and be modern and stylish. We needed someone who would be there for us at 1am and help us out. We really got this from HP and Microsoft. Had you entered one of our meetings during the project, it would have been hard to tell who was from which company – we were that close,” Griffiths recalls.

“With HP, we got access to its technical teams and manufacturing teams. If ever there was an issue, we had direct access to its teams so we could solve problems before they developed. That was very important to us.”

The device which Emirates finally landed on was the unreleased HP ElitePad 900.

Updated automation
The newly updated application, hosted by a tablet that still isn’t available to buy in shops, has completely changed the way in which the cabin crew aboard Emirates flights work.

Not only are the tasks onboard made far easier, but all tasks surrounding the flight are synchronised from any of the devices used and sent back to a central database. The application distributes data from anywhere around the world in real-time and maintains up-to-date records for each customer and each task.

This technology adds the complication of connectivity. Emirates flies to every continent around the world, bar Antarctica, meaning that wherever a plane touches down, its system needs to be connected to a main base so that all data can be recorded, received and distributed in real-time.

“Say there’s a gentleman flying on a connecting flight and on the first leg of his journey, he has coffee spilt on his suit. This data can be recorded midflight and synchronised to the central system before he even lands. The database shows who, what and when, so that when he boards the second leg of his flight, the crew can automatically approach him and ask if he would like his coffee in a cup this time, as opposed to on his lap,” laughs Naef.

Test flight
Although the immediate reaction of the devices has been good, Naef claims that the team wanted to have rolled out over 1,000 devices within the first three months of the announcement. But due to the fact that the operating system is new, Emirates hasn’t been able to fully stretch its tablet legs.

“We told HP what we wanted, we gave them some very demanding requirements, and this was for a product which wasn’t even completed,” says Naef. “So there have been some teething problems with the hardware but we’re getting there.”

Asides from these minor issues, Emirates claims to be very happy with the product, and the strength of the three-way partnership stands as a tribute to that.

“The crew loves the new devices,” says Griffiths. “They’re proud to walk around with it, some want to swap it with their personal device. It’s so important for us to make moves like this. It’s a leap of faith, really. We can never truly know how this kind of move is going to pan out, but when you’ve got a fleet like ours, you know this information and data is going to be crucial to providing a top service.”

Emirates, which prides itself on being a cut above the rest, has again made a technological move that keeps it at the forefront of aviation.