Patrick Naef, Divisional Senior Vice President of IT, Emirates Airline, did not spend his entire career in the aviation industry. However, when he was offered a position at Emirates, he knew he had found his new home. 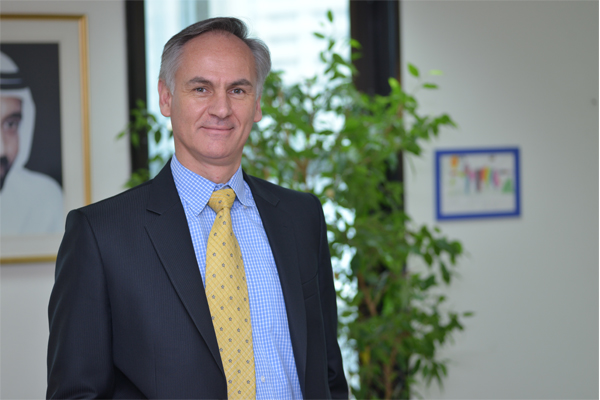 Patrick Naef, Divisional Senior Vice President of IT, Emirates Airline, may have been predestined to work for the aviation giant. “It is in my blood,” he quips, “both my mother and my father worked for Swissair and met while working for the company.” Naef himself was born and raised mostly in his native Switzerland but lived for three years in Dakar, Senegal when he was very young. “We returned from Africa when I was eight years old, and moved to a small town outside of Zurich. The population was only around 12,000 people,” he recalls. Around the age of 17, technology came into his life. “I remember that I had a programmable pocket calculator to use in my maths class,” he says.
Shortly thereafter, in 1982, Naef made his first major technology purchase. “For roughly 500 Swiss Francs I bought a Sinclair ZX81 computer,” he says. “The machine only came with 1KB of RAM, which wasn’t even enough to fill the screen of the television. I had to buy an expansion that held another 16K of RAM.” With his Sinclair, he and a friend began programming in BASIC.

Naef turned his fascination with technology into a career path when he was accepted at the Swiss Institute of Technology in Zurich in 1984. “At the time, the Computer Science programme was under the umbrella of the engineering department. There was only a master’s programme, so I studied there for five years to earn my degree,” says Naef. His graduating class was the first in what would prove to be one of the top Computer Science departments in the world.

As he moved forward, his father advised him not to make his hobby his profession. “I’m not sure that I took that advice,” says Naef, “but I did diversify my hobbies.” Naef split his time between technology and rigorous training for volleyball. “Unfortunately, I tore my Achilles tendon and was unable to play for many months,” he says. The time off the volleyball team pushed him to dedicate more to programming and technology, and when his injury had healed, his interest in technology had surpassed his drive to succeed in sport.

After graduation in 1989, he was eventually employed with HP in Zurich as a Senior Consultant. Working at HP, he says, felt almost like working for a start-up. “No one would really tell us what to do, or ask where we were,” he recalls. “As long as we were able to bill 80 percent of our time, we were really left to ourselves.” He spent most of that time managing projects and consulting with client companies.

He considers his time at HP as another form of schooling. It was the second half of the 1990s and many of the projects that his team took on were completely new. “We set up the first Internet banking structure, and we were managing large-scale, multinational roll-outs,” he says. It was an inspiring time in the history of technology, he recalls. The entire industry was changing, and Naef and his team were taking on projects that would change the way people interact with businesses.

His time at HP also served as a lesson in good management. “There was an entrepreneurial spirit there,” he says “They called it the “HP Way.” Even now there are books written about it. It was like everyone in the company was working for the success of HP, not the success of themselves. The culture was just very inspiring.”

In 1998, after four years with HP, Naef moved to Swissair. The company was well respected, and was looking to leverage IT to provide a better customer experience to passengers. Swissair had recently created their first CIO position, and Naef was asked to come in as a consultant to develop their overall IT strategy. “They realised that as a smaller airline, their competitive advantage would be in customer intimacy and customer care,” says Naef. “To support that, we kicked-off a project to develop seamless customer care, using IT as an enabler.”

Eventually, Naef went from a consultant to a full-time employee of Swissair, first as the deputy to the CIO and later as CIO. After a year, Swissair decided to join the likes of Travelocity and develop an online travel portal. The company, owned by Swissair, was started up by a team of three people, including Naef. Beyoo.com, the first Internet travel portal in Europe, was to become a huge success in his care.

Unfortunately, Swissair had troubles elsewhere. “The company was acquiring a number of other airlines and businesses,” says Naef. When the attack on the World Trade Center in New York crippled their North American sales, the company simply couldn’t take the pressure. Swissair eventually went bankrupt.

Naef was with Swissair until the last day that the company operated under that name. He then joined SIG Group, a global industry manufacturing group headquartered in Switzerland. As the CIO of SIG Group, Naef took a lesson in finances. “In the manufacturing business, the margin is so small,” he says. “I remember sitting in meetings deciding to reduce the temperature on the manufacturing line by two degrees to save costs on heating and air conditioning. This gave me a real appreciation for finances,” he says.

After three years at SIG, the company restructured and Naef went in search of a new home. With a young family, Naef needed to find a position in his field quickly. He then made the decision to join Zurich Insurance. “The work environment was completely different to what I was used to,” he says. “The politics of the insurance industry dominated everything.”

Naef stayed with Zurich Insurance for a little over a year before he received a call from a recruitment agent. “I remember I was on vacation in Spain when I heard that Emirates Airline was interested in me,” says Naef. In 2005, the airline was still relatively small, but there was clear potential.

“My wife and I had actually visited Dubai before,” says Naef, “and, to be honest, she didn’t really like it. We had come in February for a beach holiday, and it was cold and dusty and she did not want to move here.” Still, Naef went to Dubai for an interview. “They brought my wife out as well. The company showed us schools, amenities and other things that would be a part of our life,” says Naef.

Still, Naef and his family were on the fence until one, singular moment. “I was flying through Frankfurt, and I saw an Emirates Boeing 777 jet. I simply knew at that moment that I wanted to be a part of that company.” With his family convinced, he settled into what he would eventually call his home.

“When I came to Emirates, we first needed to fix the IT basics,” he remembers. “Everything relies on a solid IT infrastructure and we needed to make sure that our foundation was robust and solid.” These days, as any Emirates passenger can see, the airline has moved far beyond basics. From booking, to in-flight entertainment systems, Emirates strives to be the best in the business.

After taking on mobile computing with a hugely successful tablet roll out, and leveraging other disruptive technologies to their benefit, one wonders what could be next for the company. “These days we are looking ahead,” says Naef. “We are looking at companies like Uber and AirBNB and discussing what that type of business will look like when it hits the aviation industry.”

His father may have advised not to make his hobby his career, but instead of changing his employment path, he diversified his hobbies. “These days I love scuba diving,” he says. “My daughter is becoming certified now, so we can go diving as a family.”

Still, he has not left tinkering with technology behind. “I still enjoy playing with new gadgets and technology. I recently bought an “Internet of Things” starter kit with different kinds of sensors, so that is what I am working with now – monitoring the temperature and things like that in my home.”