In this month’s edition of Women in Tech, CNME Editor Mark Forker sat down with Loubna Imenchal, Head of Video Collaboration, AMECA at Logitech, to discuss the barriers and obstacles she has had to overcome during her decorated career in both the IT and Industrial sectors. 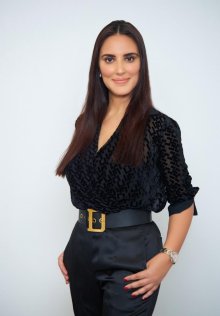 Women in Tech is a monthly spotlight feature, which documents and highlights the role of female trailblazers in the IT industry across the Middle East, and in our latest installment we spoke to the wonderful Loubna Imenchal from Logitech and formerly of Johnson Control and Honeywell to find out more about her journey.

It has been documented that gender disparity is still very prevalent in the IT industry and in my capacity as a journalist at GITEX Global, I witnessed first-hand the disproportionate breakdown that exists between genders when it comes to C-Level positions within the IT ecosystem.

In a compelling and very forthright interview, Imenchal charts the difficulties she has faced and admitted that during her ascent up the corporate ladder she was forced to fight, and it is evident that nothing has been handed to her.

“I’ve been lucky that I have worked for multinationals that started to proactively encourage the integration of women within the IT industry. However, when I began my career, especially at companies like Honeywell and Johnson Control, they were very male dominated organisations, and it was extremely rare to have a woman in a leadership position within the company, it just was something that did not happen. It was a very good journey for me though, because it was so uncommon and against the grain, it was great to be able to show and use my story as a use case and an example that women could indeed attain leadership positions within companies such as these. I think it’s fair to say that it is easier to attain leadership positions in the IT industry as opposed to an industrial environment, but many barriers still exist within IT”, said Imenchal.

The Head of Video Collaboration at Logitech conceded that many improvements to bridge the gender divide has been made – but stressed that a lot more needed to change to level the playing field.

“We can’t deny that there has been improvements, and I believe that this has come from education. However, I do think that the education sector needs to do more. I had the opportunity to teach in the American University in Morocco, but I could see firsthand that many women were simply not applying for positions within the IT environment because they still believe it is closed off to men. They are reluctant to invest themselves into a career, in which they believe the same opportunities will not apply to them, or they feel the opportunity to scale and achieve promotions within these enterprises are simply not there”, said Imenchal.

Many global enterprises have embarked upon programs and initiatives that promote greater diversity and Imenchal is encouraged by the proactive measures taken by these businesses, but also bemoaned the fact that many archaic beliefs regarding women in leadership still exists.

“I think it’s fair to say that recently many companies have started to make a concerted effort to start encouraging greater diversity within their workforces and have implemented policies that ensure a certain percentage of their C-Level executives are women. Multinationals on a global scale are encouraging diversity, and diversity is good. Unfortunately, there are many who believe outdated stereotypes like women are not risk takers – and perceive it to be some sort of a weakness if a woman in a leadership position is cautious in terms of protecting the business and reluctant to take a really big risk. Men would not be held the same standard, so it is wrong, and it is all about perception. If you look at history some of the greatest political leaders in the world are women, so it just doesn’t stack up”.

Imenchal was emphatic and unapologetic when she claimed that she has had to work harder than her male counterparts, because again the environment has been cultivated to suggest that she would not be up to the job.

“I have had to work harder than my male counterparts to be able to put myself in a position where I have assumed leadership positions, and that’s just the reality of the situation. It can be exhausting because you are always trying to prove yourself and show that you can do the job, which over time can be trying. I would encourage women not to be afraid, personally I took it as an opportunity to show that I can do it and demonstrate that I am more than capable. You need to try and turn a negative situation into a positive one. I think that because I was constantly questioning myself it pushed me to become better, and I never ever became complacent, or allowed myself to fall into a comfort zone, whereas my males peers didn’t have to question themselves because there are surrounded by an environment that tells them they are doing good just because they are male, whereas if you are women there is doubt as to whether or not you can succeed”, said Imenchal.

In terms of what advice she would give other women looking to follow her lead and replicate the success she has enjoyed, she was unequivocal in stressing the need for them to be themselves.

“People have approached me and said how did you do it? I always tell them that they must trust themselves. Trusting yourself is the key. It is important that they do not need listen to destructive feedback, constructive criticism is good, because people are trying to help you become better, however, the ones that are telling you that you are never going to make it are talking about their own experiences. They don’t know you, and they don’t know how limitless you can be. Trust yourself and work hard and you can achieve what you want to achieve” said Imenchal.