It’s that time of year again. We can all admit that when waking up yesterday morning and reading our regular news outlets that some things just didn’t quite add up. To settle any doubts you may have on your latest discoveries, Tahawul Tech has compiled a list of some of the best and worst April Fool’s Day spoofs from the technology industry.

Petlexa – Amazon Echo for your pets

Meet Petlexa: Amazon Alexa’s trusty counterpart that speaks dog, cat or hamster. The smart device understands what those squeaks, meows and barks mean and responds in that soothing Alexa voice we all know so well, so that your pets can get exactly what they want, when they want.

This commercial is one I imagine would have excited many Dubai-based drivers yesterday. The Lexus “lane valet” concept forces slow moving cars to shift lanes using autonomous vehicle technology, so that you can get to your destination quicker.

It wouldn’t be April Fool’s without a whole heap of pranks from Google, and 2017 is no different. This year debuts the arrival of the smart garden. Following on from the Google Home technology, these gnome-shaped devices answer to all of your outdoor needs. Just walk outside and speak your command, and Google’s army of helper will come to the rescue.

Who knew that network provider-come-fashionista T-Mobile could combine couture with connectivity? Users wearing this pink number made from nano technology will apparently never go without service again – whether through full bars mobile service or literally all-over fitness tracking. The commercial slates the use of other wearable devices, and suggests it is completely ridiculous that a small wristband could track your entire body’s activity. The threads of the design are laced with 4G LTE network capabilities, so that users can become a ‘human hotspot’ and never go without mobile connection again.

And finally, for Google’s next trick… Ms. Pac-Man has paid a visit to the Google Maps app. While this is no April Fools’ prank, it was released on 1st April and will only last until 4th April on both Android and iOS operating systems. It converts your current location into a maze, and you get five lives to outrun the ghosts. Thank me later. 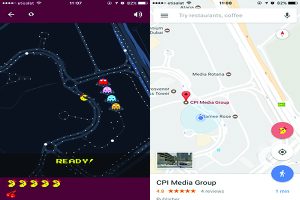