Microsoft on Wednesday has installed a massive data centre prototype on the seafloor near Scotland’s Orkney Islands. 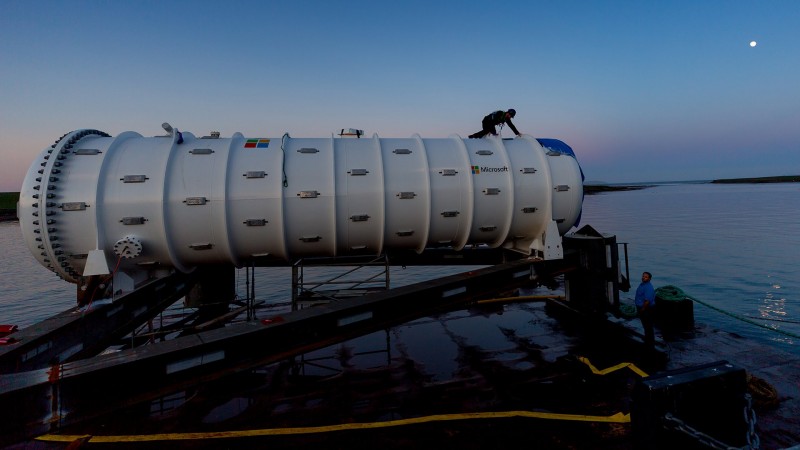 According to the company, the data center is a 40-foot-long, submarine-like structure that can hold 864 servers.

The data centre, a white cylinder containing computers, could sit on the sea floor for up to five years without needing maintenance, said the tech giant.

It was assembled and tested in France and shipped on a flatbed truck to Scotland, where it was attached to a ballast-filled triangular base for deployment on the seabed.

An undersea cable brings the data centre power and takes its data to the shore and the wider Internet – but if the computers onboard break, they cannot be repaired.

The successful sinking of the device, called Project Natick, is the result of years of work to see if data centres can be stored offshore in a sustainable and efficient way.

“That is kind of a crazy set of demands to make,” said Peter Lee, corporate vice president of Microsoft AI and Research, who leads the New Experiences and Technologies, or NExT, group. “Natick is trying to get there.”

Lee’s group pursues what Microsoft CEO Satya Nadella has called “relevant moonshots” with the potential to transform the core of Microsoft’s business and the computer technology industry. Project Natick is an out-of-the-box idea to accommodate exponential growth in demand for cloud computing infrastructure near population centers.

More than half of the world’s population lives within about 120 miles of the coast. By putting data centres in bodies of water near coastal cities, data would have a short distance to travel to reach coastal communities, leading to fast and smooth web surfing, video streaming and game playing as well as authentic experiences for AI-driven technologies.

“For true delivery of AI, we are really cloud dependent today,” said Lee. “If we can be within one Internet hop of everyone, then it not only benefits our products, but also the products our customers serve.”

According to Lee, everything learned from the deployment – and operations over the next year and eventual recovery – will allow the researchers to measure their expectations against the reality of operating underwater data centres in the real world.

Data centres are the backbone of the Internet, the physical clouds of cloud computing where customers leverage economies of scale to securely store and process data, train machine learning models and run AI algorithms.

Demand for data centre resources across the computing industry is growing exponentially as corporations increasingly shift their networks and computing needs to the cloud, and Internet-connected intelligent devices ranging from smartphones to robots proliferate.

“When you are in this kind of exponential growth curve, it tells you that most of the data centres that we’ll ever build we haven’t built yet,” said Cutler, underscoring the need for innovation in the race to build out what is fast becoming a critical piece of 21st century infrastructure.

The underwater data centre concept was originally presented in a white paper prepared for a Microsoft event called ThinkWeek that encourages employees to share out-of-the-box ideas. Lee’s group was intrigued. Just 12 months after launching Project Natick in July 2014, the team had deployed a lab-built proof-of-concept prototype in calm, shallow waters off California.