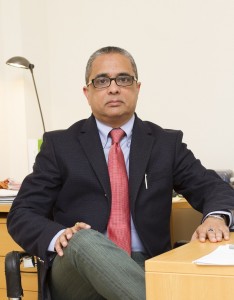 The success of online B2B market place Tejari.com and the rising demand for e-commerce in the Middle East meant the time had come to create a similar platform for consumers. Following a two-and-a-half year project to build the infrastructure, Tejuri.com was born.

When Tejuri.com launched on March 3, many business heads would have recognised the likeness of its name to another online market place.

Tejari.com was established in 2000 with the purpose of optimising the procurement costs for various government entities and large business houses. The website provides a portal that suppliers can register to, and government agencies can bring their requests to, in an open and transparent online environment.

In 2010, following the positive response Tejari had generated in 10 years, it was clear that consumers were also demanding a convenient and accessible online space to do their shopping, especially at a time when the world was in a recession.

“We conducted some research with Nelson, and it was very interesting to see that the size of the e-commerce industry in pure online shopping in 2011 was about $3.2 billion from just the GCC countries,” says Ayaz Maqbool, who went from a two-year stint as CIO of Tejuri to Managing Director of the firm in June 2012.

“Of that, about $2 billion was leaving the shore because you and I could not find credible websites offering trusted merchandise. It was all coming from overseas. In effect, this is a huge amount of money that, if returned to the retail industry here, would solve a lot of challenges for retailers in terms of where the new customers are, how they find new revenue, and how they do that with minimum spend from their side.”

So with the market value of online shopping in the GCC at an astronomical level and growing, but a majority of it being claimed from overseas, the business case for Tejuri was clear.

“There is a sizeable industry growing at double-digit growth year-on-year, which as a starting point in itself is pretty lucrative,” Maqbool says. “But there are barriers for retailers to go online because they have to invest capital money in building their own websites, and in e-commerce you need continuous investment because of the changing habits of the consumer.”

However, whilst the idea was there and had huge potential, the entire infrastructure had to be built from scratch, meaning a mammoth IT project was required before going live.

Following a lengthy selection process, Maqbool and his team selected a cloud-based infrastructure using the complete technology stack of Microsoft and hosting with eHosting DataFort (eHDF). For its payment gateway, Tejuri is using Visa CyberSource technology, which also has a fraud management tool to ensure minimal risk.

“We are an e-commerce organisation and, as such, we promote the idea of being lean and cost-efficient,” Maqbool says. “Therefore all our core and strategic functions are very much in-house, and then there are a lot of long-term outsourcing partnerships being established to augment the in-house team.

“When it came to the point that we started the software, database and application-building sides of it, we then had to look at how to host the solution. The choice we had was to host it in-house or with a third party, and with a third party, we had the choice of hosting it locally or internationally.”

With retail being a very seasonally-driven business, scalable and contractible infrastructure was an important priority for Tejuri.

“The requirement was for extreme agility in terms of responsiveness, because building a peak-time infrastructure would be like burning a lot of cash during the low times,” Maqbool says. “So after looking at factors in terms of agility, responsiveness, performance, security, latency and TCO, we decided to host with eHDF, which had already been hosting Tejari for 10 years.

The implementation with eHDF was three months, which was helped by Tejuri’s building-from-scratch nature because it meant conversions or upgrades were not required.

“We are a start-up business and therefore everything we were looking to do was from fresh,” Maqbool says.

In a world where cyber security is a threat to anyone with an online presence, it is no surprise that security was one of the biggest challenges when building Tejuri’s infrastructure.

“We had not experienced the performance means in B2C and what an external threat in terms of hacking would cost to our business. So I would say the challenges we had were to look at how scalable the infrastructure we had selected was and could become, how we ensured it would deliver the performance we know people accept in the online space, as well how secure it was to match up to potential threats.”

To put this infrastructure to the test before going live, Tejuri entered a three-to four-month pilot stage, which Maqbool was very happy with.

“We experienced a combination of these challenges during our pilot stage, and I felt satisfied not only that our systems were robust, but even our applications, software and hosting from eHDF were of world class.

“We could offer a good performance even with peak traffic, and manage very well the hacking attacks we saw. We also did a lot of vulnerability tests by bringing in external third parties to try and hack us, and we were ranked as the most secure site.”

The success of the pilot stage meant Tejuri could go live on March 3 with confidence, having streamlined all processes and already taken care of all the teething issues.

Having launched with over 40 retailers signed up, it is now hoping to have over 100 on its books by the end of the year.

“I definitely see this as the future of retail and commerce in the Middle East because it allows you to come into a mall-like environment, which people in this part of the world are very familiar with,” Maqbool says.

“It gives them an online shopping mall that sits side-by-side to the brick-and-mortar shopping mall, and it complements the shopping mall experience through the convenience it gives you to find the same retailers in another common space online.”