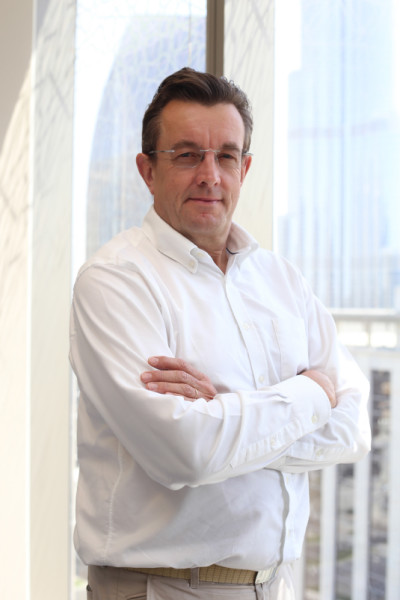 Clive Haswell’s 25 year tenure at Standard Chartered Bank has encompassed a range of senior business and IT roles in London, Singapore and China. Now CIO for the MENAP region, his diverse journey within the company has cultivated a sharp, holistic philosophy of propelling the company’s regional operations into the digital age.

Although he’s spent the last 25 years of his professional life at the same company, Clive Haswell’s time at Standard Chartered couldn’t have been more varied. His vibrant, international career has given him a succinct understanding of the importance of business-IT alignment in the Middle East.

Haswell initially studied Mathematics at the University of Wales in the United Kingdom, where his interest branched out into computer science. “I’ve seen dramatic changes in technology since those days,” he says. “Back then we were dealing with paper tape and punch cards as the main data medium.” His career got off to a promising start in 1980, when he joined giant British Telecom as a Trainee Programmer in his hometown of Cardiff. After spending five years in the Welsh capital, he took a role in the north of the U.K. as a Systems Programmer in Sheffield. “I was overseeing a number of projects there,” he says. “I dealt with mainframe computers; a lot of IBM-related work.”

A few years later, Haswell took on the first “big change” of his career, in a largely software-based role at Chartered Trust – a subsidiary of Standard Chartered Bank – back in Cardiff. His progress there did not go unnoticed, and in 1990, he made the leap to Standard Chartered’s HQ in London. Once there, his role took on great importance in the run-up to the turn of the millennium, where he was tasked with upgrading the company’s software and obsolete hardware. “There was a lot of over-excitement surrounding the Year 2000 Project,” he says. “’How will systems respond to the date change? What will happen if we get this wrong?’ In the end it was a lot of hype for nothing.”

Beyond his Y2K-related remit, Haswell’s London role also involved many elements of technology strategy for the company’s 25,000 employees. “IT products had to become standardised,” he says. “We had to wire desktops together, maintain data centres and ensure operability standards. In short, we had to bring discipline and conformity to global constructs for data networks and data centre services.”

Haswell’s time in the English capital would serve as a gateway to an international career. In 2001, he took charge of the group’s IT infrastructure projects in a Singapore-based role. “I had to establish a single bank perimeter network,” he says. “Crucially, I had to decide on the optimum number of data centres that the company should have.” Haswell opted for a single site in Hong Kong, which remains there to this day. “Then and now, Hong Kong had and continues to have the best infrastructure in Asia, so has proven to be the right choice.”

Just over a year after the move to Singapore, Haswell’s career took a seven-year swing away from IT-based work. He was enlisted to become the Bank’s Head of Governance for Asia in late 2002, where he would be overseeing operations in 15 countries. “Taking the job was a risk from my point of view,” he says. “The Regional Group Executive Director, who recruited me, loved to help staff progress by moving them out of their comfort zones. In the long term, that’s been massively beneficial to me.”

The experience would be a major boost for Haswell, both professionally and personally. He recalls how the opportunity to work across Asia was a cultural eye-opener. “I had to work in a range of places – Sydney, Japan, Seoul, Thailand, Vietnam,” he says. “South Korea was a particular shock. The place is fascinating. It has modern cars and technology, but the language is totally impenetrable. Operations were small there but they had massive ambition.” Haswell faced not only major cultural hurdles in his governance role, adding, “I’d worked in a professional tech environment for 15 years, but this was something completely different. I understood software, and how to make it fit a business environment, but governance was new at the time. There were people management and compliance issues; the initial experience was rather uncomfortable but hugely beneficial in the long run.”

Following a successful transition away from IT, Haswell was next enlisted to oversee yet another large-scale company operation. Hired as Programme Director for Bohai Bank – a Chinese domestic bank part- owned by Standard Chartered – he was charged with introducing international standards, strategy and compliance to the Tianjin organisation. “Project management competencies are not endemic in banks, whereas everyone in technology has a certain familiarity with them,” Haswell says. “I think that’s a large factor in why I was hired to direct the overall ‘design’ of the bank.” An initial six month project ended up lasting 18, and the extra time helped cement Haswell’s understanding of the requisites of effective project management. “It’s important to see the big picture, and ask whether or not things fit,” he says. “If not, you need to challenge the stakeholders and convince them that a new solution is the right one.”

It wouldn’t be long before Haswell was once again thrown in the deep end. In 2006, the same executive who appointed him as Head of Asian Governance called upon his services for another senior role – this time as Standard Chartered’s CEO for Sri Lanka. The move to capital Colombo was an initial shock to his system. “On my first day in charge I arrived for a company meeting at the town hall, and 300 people were there,” he says. “I was pretty much the only expat there, and it kind of hit me that I was the leader of this organisation, having never been to the country before. It was very strange.” In addition, Haswell’s IT skills were no longer up to his high standards. “By now my technology knowledge was a bit off-the-pace,” he says. However, his broad skillset allowed him to excel in other areas. “I performed my role differently. By now I understood the importance of not using tech for tech’s sake, and harnessing the right tech at the right time. I think I was better able to deliver an all-round corporate perspective and lead authentically; being honest, being myself.”

In 2009, yet another change of scenery was on the horizon for Haswell, as he was made Standard Chartered’s Chief Information Officer for the Middle East, North Africa and Pakistan region, in a Dubai-based role. “Now, my main job is not technology-focused,” he says. “I have to deal with a range of specialist areas, but the trick is being able to dive deep without getting bogged down in them.” Haswell says his role is largely people-focused. “The benefit of my experience means I am able to educate and test my team. Keeping people motivated and interested is key, rather than getting clogged up in bits and bytes. It’s important to pick out the stars and keep pushing them.” Haswell has also relished the opportunity to manage a diverse regional division. “With many different countries, it is challenging,” he says. “Pakistan, for example, is a big franchise and has a very different economy from Gulf countries.”

Haswell’s next big challenge is to digitise Standard Chartered’s banking operations, which he says will be no easy task. “The digitisation of the banking industry has hardly started,” he says. “Compared to the publishing or music industries, where the commercial model is based on digital, we have a long way to go. Classic products such as trade finance, e-commerce exchanges and real-time payments need to be put on electronic platforms, and that is very different from what we have today. Who knows, maybe in 10 or 20 years Bitcoins will be a major currency.”
Building dynamic, multicultural teams is as relevant now to Haswell’s colourful career as it has been throughout the last 15 years. “It’s absolutely essential in Dubai. Getting a range of nationalities with different backgrounds to collaborate and execute tasks in a disciplined manner is so important, and also very satisfying.” The experience of working around the world has given him a broad appreciation of the unique values of different cultures. “Sri Lankans, for instance, are extremely warm, friendly people,” he says. “The Chinese are incredibly driven and ambitious, while the UAE is a diverse country that is making huge progress, with vast change being led by a small group in charge.”