Samsung, during a special event in New York, has last night launched the latest addition to its Galaxy Note series – the Note 8. 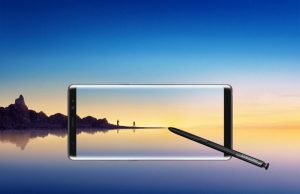 The launch of the Galaxy Note 8 is a significant one for the company as it comes after the controversies of the Galaxy Note 7 regarding safety issues and for Samsung the new phone will be a chance to repair and rebuild the Note brand.

The Note8 has a 6.3-inch, Quad HD+ Super AMOLED screen. It has a curved screen and is available in a range of attractive colour schemes: black, blue, grey and gold. It’s also IP68-rated, which means it’s resistant to dust and water.

Galaxy Note8 is equipped with a Snapdragon 835 processor, 64GB of storage (with microSD support), and 6GB of RAM. It runs Android 7.7.1 Nougat. The device is expected to receive an Android 8.0 Oreo update but it isn’t the in-built version of the operating system.

It is equipped with a 3300 mAh battery, which Samsung execs swear up and down has gone through internal testing, external testing, and work with Underwriters’ Laboratory, provides more juice than most phones.

Samsung has equipped the Note 8 with two 12-megapixel cameras. The regular / wide-angle lens has an aperture of f/1.7, and the telephoto lens is f/2.4.

Both sensors offer optical image stabilisation, which Samsung claims as an industry first. The cameras also allow the Note to utilise its telephoto camera more often instead of defaulting to the regular camera in low-light conditions, which is what the iPhone often does.

Samsung has included optical image stabilisation and a feature called Live Focus, which lets users adjust the depth of field and bokeh both within the camera app.

Meanwhile, the front of the phone has an 8MP selfie camera with an f1.7 aperture.

Samsung has a number of extra features to help users take full advantage of the massive screen.

As an example, it has the App Pair, which lets users group two apps together and open them both at the same time with a single tap of your finger. They appear in a split-screen view, allows the usage of two apps at one time.

It also features Google Assistant as well as Bixby, Samsung’s own virtual assistant.

Unfortunately, Samsung has also included bloatware in the form of its own versions of some of Google’s most popular apps.

Last but not the least, the Note brand’s trademark feature is the S-Pen.

According to Samsung, the new S-Pen – which is also water- and dust-resistant – is more pressure-sensitive and has a finer tip than older versions.

The Galaxy Note8 is expected to arrive in US store in 15th September with the price ranging from $950 to $1000.

Watch this space for news about the UAE launch and release dates of the Note8.