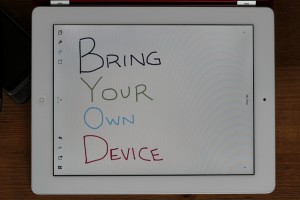 When Alice fell down the rabbit hole, she emerged into a Wonderland of oddities: trapped in a shrinking body with talking animals, mad tea parties, and a Queen of Hearts who shouts, “Off with her head.”

Mobile BYOD may not be that fantastical, nevertheless contradictions appear at every turn. It’s a nonsensical world where employees and even outside contractors tell techies what to do, touch-screen consumer gadgets goose sales, Androids attack with malware, and Apple reigns over the enterprise.
CIOs must feel a little like Alice.

Mobile BYOD, or bring-your-own-device, is one of the hottest trends in technology today. Employees are pushing IT to support their personal smartphones and tablets at work. They want these consumer devices to tap into the corporate network, run critical apps and access sensitive data.

Alice was all alone in Wonderland, but CIOs in mobile BYOD are not. In results of a survey of 600 U.S. IT and business leaders released this week, Cisco reported “a staggering 95 percent” of respondents permit employee-owned devices in the workplace. Virtualisation giant VMware recently went “all-in” with BYOD smartphones for its employees.

Mobile BYOD is happening even behind closed doors. Juniper Networks surveyed more than 4,000 mobile-device users and professionals. The surprise finding: 41 percent of all respondents who use their personal devices for work are doing so without permission from the company.

Business people claim that they’re more productive with smartphones and tablets of their choosing. The Cisco survey appears to back them up, surmising that worker productivity rises with mobile BYOD adoption with annual benefits ranging from $300 to $1,300 per employee depending on job function.

Road warrior salespeople are at the high-end of the benefits scale. They are intimately familiar with their iPhones and iPads, for instance, and can use them to great advantage while calling on customers. (For more on this, check out Are BYOD Workers More Productive?)

“It’s the blend of the smartphone and tablets that are continuing to drive productivity benefits,” says Joseph Bradley, chief economic officer at Cisco’s Internet business solutions group, which conducted the study. “They empower employees who are closer to the customer.”

Among professionals, iOS devices surpass Android devices, according to a study conducted earlier this month by Zscaler ThreatlabZ. Among consumers, Android smartphones collectively match or outsell iPhones. It’s another bizzaro twist in the mobile BYOD world where everything seems out of sorts.

Clearly, the power pendulum is shifting away from IT and toward the business side. While CIOs fretted at first, recent signs show they might be coming around. Three out of four IT leaders in the Cisco survey said consumerisation was “somewhat” or “extremely positive” for their companies, often citing improved employee productivity and greater job satisfaction.

CIOs, though, were also quick to point out the challenges of supporting multiple devices. Mobile BYOD introduces a host of security, management and legal issues.

This is only the beginning as BYOD slides into BYOA, or bring-your-own-apps. According to the Cisco survey, employees also want to bring their own applications to work: 69 percent of respondents said that unapproved applications are more prevalent today than two years ago.

Implicitly, BYOD employees want to use unapproved apps for things like social networking, a highly controversial worker-productivity killer. They want to read, send and store documents using cloud-based email or a cloud-based storage service provider, which is an IT security nightmare. They want to communicate over their personal IM that is presumably outside IT’s purview.

If CIOs thought mobile BYOD was an upside-down world today, just wait until tomorrow. As Alice in Wonderland says, “It was much pleasanter at home, when one wasn’t always growing larger and smaller, and being ordered by mice and rabbits.”