After a tumultuous 11 months, Avaya exited Chapter 11  and listed on the New York Stock Exchange in January, marking the second innings for the real-time communications company.

“We are a new company and we are uniquely positioned to succeed,” said Jim Chirico, Avaya’s CEO, a few minutes after ringing the opening bell at New York Stock Exchange. After a balance sheet restructuring that helped it to whittle down debt, Avaya now claims to have access to a $600 million war chest to fuel its future growth. “We are in the midst of a massive market shift brought on by digital transformation, and now we have the financial strength to invest in newer technologies such as AI and cloud. We have launched a transformation plan ourselves, and to win in the technology market today you have to go through transformation every five years.” 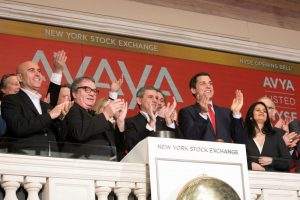 Chirico said that going public is a real testimony to the power of his company’s brand, and loyalty from customers and partners. “What I didn’t fully appreciate is how pervasive our brand is in the marketplace,” he said. “Our customers wanted us to win, and they are the real reason where we are here today. We have spent a lot of time over the last 12 months improving our operations to be best-in-class, and we are going to expand those operational efficiencies and productivity improvements across the company as well as our customer base.”

Over the last five years, Avaya has begun to undergo the painful transition from being a hardware-centric company to a software and services company. “We took a bit of hit on our revenues when we made this transition. Our revenues have stabilised over the last four quarters, of which 60 percent are recurring revenues with a high retention rate of 90 percent.”

Chirico says Avaya is now a profitable company, which made $3.3 billion in revenue last year with a EBITDA of 25 percent. “Our growth margins are north of 65 percent, and our competition doesn’t have the kind of cash that we have. But what is most important is what you are going to do with that cash – we are going to invest not only in R&D but also in sales, systems and processes. We will not be known as a company with a great cost cutting engine but one focused on revenue growth. We are going to invest in areas that I call sustained performance.”

Going forward, Avaya is also planning to ride on its massive installed base, said Nidal Abou-Ltaif, president of Avaya International. “We are the leaders in the UC and CC space with 300 million installed seats and 90 percent of Fortune 500 companies in our client roster. We are going to use this as an asset and offer our customers more value by offering them different cloud consumption models.”

Avaya has recently launched a business unit dedicated to cloud products and services, but industry pundits believe the company might have come to the party a bit late, and will play catch up to the likes of Microsoft and Cisco. Mercer Rowe, the former IBM executive who has taken charge of Avaya’s cloud business as its GM, said Avaya’s cloud strategy is around a hybrid consumption model. “For us, cloud is about a transformative business model, and we will not be pigeonholed into a particular delivery model, he said. “Our customers are not rushing to the cloud, or putting all their workloads on public cloud. What they are clamouring for is a cloud model of consuming technology, and a platform for innovation on top of that. That is exactly our value proposition.”

Avaya CTO Laurent Philoneko said the focal point of Avaya’s R&D strategy is to make products cloud-native from the get-go. “Our aim is to simplify IT – to make our solutions more easy to implement and operate, with a great degree of automation and orchestration to provide instant gratification to our customers. Analytics and mobility are other areas we are going to invest in, and we would continue to invest in devices targeted at the network edge.”