As a crucial new pillar of CPI Media Group’s all-new platform, Tahawul Tech, CNME was delighted to host the debut edition of Your Voice, the new debate series for business leaders and technology decision makers in the Middle East. Technology heads from a range of verticals across the UAE gathered at Jumeirah Emirates Towers to have their say on the hot topic of 2017: innovation. 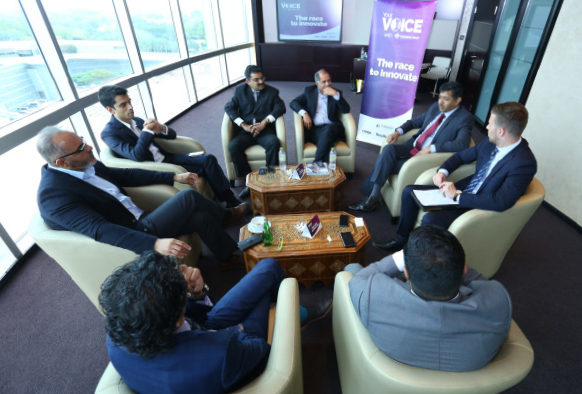 Searching for that ‘eureka’ moment of discovery is what every business strives to achieve, and something that is becoming an increasing necessity in the challenging and competitive digital era that the Middle East now finds itself in.

While we don’t know exactly which innovations will drive growth in the next half-century, no one could have predicted the power that the Internet would have on our day-to-day lives 30 years ago. Closer to home, are businesses finally waking up to the need to innovate in order to survive?

Venkatesh Mahadevan, senior technology and transformation leader, Dubai Investments, discussed the need to make internal alterations before rushing to accelerate the pace of change. “As a group, we’re not in a race to innovate,” he admitted. “What we’ve worked on over the last three or four years is getting the business in order, as opposed to digitising and automating every aspect, as I’m a big believer in the fact you mustn’t run before you can walk.”

Attempting to do too much too quickly in this way could majorly hinder a company’s progression in implementing new ideas. “What is worth remembering, is that even for these major tech projects – take Tesla for example – is that it’s an accumulation of little changes in order to achieve an end goal,” said Akram Assaf, CIO of Bayt.com.

Defining innovation can be a grey area across the industry, according to Sebastian Samuel, CIO, AW Rostamani. “A lot of vendors coin cloud and mobility as innovation, but it’s much more about the individual changes you make within your own organisation,” he said. “People used to talk about innovation as only being possible in high tech markets with the big giants, but I actually believe you can do more with less.”

A general consensus throughout the discussion was that innovation doesn’t necessarily always have to be about something new, and it could instead include making changes to existing infrastructures for the greater benefit of a business and its customers. “Changing something simple at the bottom of the pyramid to create a better customer experience can class as innovation,” said Albert Dias, co-founder of Musafir.com. “A lot of innovation today is about democratising the way we offer services, increase ubiquity and make our services more easily available.”

Similarly, while Ashith Piriyattiath, group head of IT at Al Masah Capital said that the investment firm “Wasn’t ready for digital transformation,” he outlined the steps the company has taken to create a steady state of business within its current infrastructure, while remaining compliant with DIFC regulations. “Our first step was to migrate everything to the cloud, and we have now successfully utilised this technology,” he said. “We initially focused on the ‘walk-into-store’ businesses, but since we started doing business with online promoters, such as Zomato, the business revenue in this segment has increased up to 18 percent.”

For the Middle East region, the stage is most certainly set for changes to accelerate and alter the way companies do business through technology, according to Assaf. “The region’s leadership, particularly in Dubai, is prepared to embark on experimentations in giving companies access to data to enable them to contribute to the growing economy,” he added.

In order to maximise the potential of government initiatives in encouraging transformation within the region, Samuel believes that more still needs to be done. “Private and public partnerships need to be stronger to create a more convenient way of company’s helping citizens,” he said. “The Dubai government is starting this, but every department has a different culture and a consistent approach is lacking, meaning progress is not accelerating at the pace it should be for Dubai.”

The discussion then moved onto barriers to innovation across organisations. “Innovation requires a cultural change,” said Sivakumar Venkatraman, CIO, Dubai First. “It is not just dependent on an IT department; every employee has to be inclined to change. I find that there is often pressure from executives at the top that feel they have invested so much into transformation but are not seeing enough results, but we need to ensure we stick together throughout our innovation strategies if they are going to materialise successfully.”

Dias reflected on his position as a co-founder, and admitted that initiating innovation was somewhat easier for him as he doesn’t have to convince management or face pressure from the top. “However, the need to find people to carry forward our innovation vision is a hurdle we often face,” he said. “In this region, we’re so used to getting by and being complacent, whereas other regions see innovation as second nature and have much more enthusiasm. Finding talent in this region is not impossible, but it’s also not easy.”

Shailesh Mani, head of IT, LifePharma, discussed the barriers he faced in implementing an ERP solution at the company’s manufacturing facility. “Employees were wasting hours of valuable time carrying out tedious, manual processes and waiting for departmental approvals before they could progress with any changes,” he said. “I told my president that we needed to automate these processes, but executives believed it would create issues with auditors. I eventually persuaded them to let me demonstrate what it would mean across one department, and now our production processes are completely paperless.”