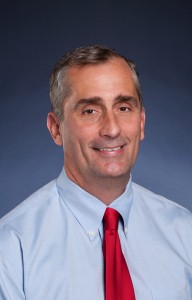 Intel hasn’t signaled a change in strategy with the appointment of Brian Krzanich to CEO, but it is likely that the company will take steps to outrun its foundry competition by opening its industry-leading manufacturing facilities to more third parties.

Krzanich replaces Paul Otellini, who will retire this month after 40 years with the company, including eight years as CEO. With knowledge of Intel’s complex manufacturing and chip operations, Krzanich became the top candidate to take over from Otellini.

The appointment of Krzanich points to a possible directional change for Intel to take on a larger foundry model and make more chips for third-party companies. Krzanich previously managed Intel’s manufacturing operations, and analysts agreed that his appointment sends a message the company wants to use its strong manufacturing assets to generate revenue and keep factories occupied.

“Intel will lead with massive manufacturing and fab technologies to attempt to outrun their competition. Additionally, Intel will likely ramp their foundry business and turn it from a hobby into a billion dollar business,” said Patrick Moorhead , president and principal analyst at Moor Insights and Strategy, in an email.

There’s no change in the company’s strategy as of now, though things may change with manufacturing in the future, said Chuck Mulloy, an Intel spokesman. Manufacturing is a core asset for Intel, Mulloy said, adding that Intel’s Technology Manufacturing Group has 50,000 employees, including 4,000 Ph.Ds. That is roughly half the employee count.

Intel puts a lot of research into underlying science and physics in the field, and will continue to take advantage of its manufacturing resources, Mulloy said.

“We’re not going to walk away from that,” he said.

Intel is the world’s largest chip manufacturer and has invested billions of dollars in building new factories. It will be the first to move to the 14-nanometer process later this year. The nanometer process refers to the underlying physics used in factories to create substrates on which chip features are etched. Intel was the first to stack transistors on top of each other — also called FinFET or 3D transistors — in 2011, while rivals such as TSMC and GlobalFoundries are expected to catch up only next year.

But with PC shipments falling and Intel’s smartphone and tablet chips not shipping in large amounts yet, Intel will need to fill the factory capacity to reduce the financial burden from low utilization. More chips will be coming out of Intel’s factories with the upcoming move to larger 450-mm wafers, analysts said.

Intel won’t change direction on its public-facing operations like mobile and PC chips, but is doubling down on manufacturing, said Sergis Mushell , an analyst at Gartner.

Krzanich is the right choice for CEO as he understands the business of manufacturing and ways to generate profits from it. He will be able to take advantage of the company’s manufacturing assets, Mushell said.

“At this time, there is no other alternative but to do it. You have to fill up those fabs,” Mushell said.

Choosing Krzanich as CEO is a clear indication that Intel believes it is time to take advantage of the manufacturing assets, which are the company’s strength, said Dean McCarron , principal analyst at Mercury Research.

McCarron estimated that Intel would likely dedicate 80 percent of its capacity to its own chips and leave 20 percent for third-party chips. Right now that third-party chip-making operation is small, but McCarron expects Intel to take on more manufacturing contracts as it moves to a foundry model.

Intel is first and foremost a manufacturing company and that is the company’s most distinctive strength relative to competitors such as Qualcomm and AMD, which use third parties to get their chips made, said David Kanter , a chip expert and industry observer.

Intel has poured millions of dollars into smartphone and tablet chip development as it tries to take market share away from ARM, whose processors are used in most mobile devices. But Intel has a philosophy of not making chips that would enable competitors.

“Intel is successfully pursuing strategic customers for foundry work, and will continue to do so. I don’t believe that Intel will work with competitors ever,” Kanter said.

But there could be some exceptions.

“Somebody like Apple — if they are not going to use x86 — I don’t they would view them as a competitor,” said Mercury Research’s McCarron.

But Intel recently has had trouble keeping its factories busy because of a drop in PC chip shipments. Krzanich is responsible for the current capacity situation Intel is facing, said Jim McGregor , principal analyst at Tirias Research.

Intel will probably need dedicated capacity and design services to be truly successful and that could take a considerable amount of time to establish.

“They are already working on that, but it will take a long time to put the resources and business model in place,” McGregor said.