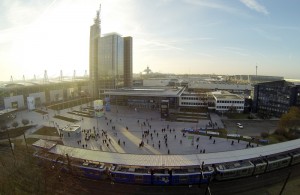 As any CeBit visitor knows, it’s impossible to navigate the vast trade show without coming up with a decent plan. Unfortunately, only a handful of exhibitors at this year’s event realised that the same applies to vendors, too.

You can never go to CeBit without a proper plan. The largest IT trade show in the world, the four-day event is spread across an enormous campus on the outskirts of Hanover, Germany. Halls as big as the entire Dubai World Trade Centre complex are dedicated to just one section of the fair each, and shuttle buses round up tired visitors wishing to get from one end to the other. To visit without a plan results in an overload of information, much aimless wandering and very, very sore feet.

The funny thing is that every visitor to this year’s CeBit knew exactly what he or she was coming for, yet the vendors seemed to lack any real plan. With the exception of a few firms – such as Software AG, which we cover on the next page – exhibitors, on the whole, seemed to have simply set up their stands and hoped for the best. Yes, the likes of IBM and SAP had set up enormous, triple-decker stands capable of housing hundreds of visitors, but for almost everyone else, it was simply a case of handing out a goody bag in exchange for sitting in on a quick sales pitch.

Even the opening ceremony seemed bereft of direction. Angela Merkel, Chancellor of Germany, gave a heartfelt speech on the importance of technology in combating the effects of the still-struggling European economy. Education was important, too, she said, highlighting the need for the IT industry to position itself as attractive to the upcoming generation.

And Donald Tusk, Prime Minister of Poland, followed her rhetoric, at the same time promoting his own country’s growing number of skilled IT professionals. CeBit sees Germany partner with another country every year, and Tusk was keen to eek every cliché to do with international cooperation that he could out of this year’s arrangement.

So far, so standard. But then, out of the blue came Tom Enders, CEO, European Defence and Space Company (EADS), who presented a futuristic Mars Rover called Bridget, which EADS subsidiary Astrium is working on with the European Space Agency. As interesting as the presentation was, it was genuinely unclear whether or not he’d come to the right show. What did this have to do with IT?

Enders did eventually begin to hone in on the audience. He said that despite Bridget’s ability to climb over boulders, drill holes on the surface of Mars, and find its own way around the planet, its core processors were made in the 1990s. The Aerospace industry, he implied, could do with a lot more innovation, and IT could help.

“When Bridget sets off for Mars in 2018, computer performance will have tripled in comparison to today,” Enders said. “By that point, her computer will be 30 years old.”

The EADS CEO went on to describe the state of the aviation industry, which sees supervisory authorities freeze software components when certifying new aircraft. This makes the software outdated by the time airlines can put the aircraft into operation, Enders said.

“In addition to the approximately €200 million in investments for the IT systems of a new type of aircraft, further high costs are incurred due to maintenance, as we are dealing with outdated systems from the very start,” he explained. “We need to increase the speed of innovation without compromising on safety.”

The IT industry could help with this, he said, though he failed to go into great detail over how. No doubt it was an interesting speech, but, like the speeches delivered by Merkel and Tusk, it seemed to have little point to it.

But what of the show itself? Well, two gargantuan halls were dedicated to business IT, though they were largely taken up by SAP, Software AG and IBM. These stands were so large that they more resembled medium-sized villages. It also meant that lesser firms were relegated to the back-alleys of the conference halls, out of sight and out of mind. Though these were mostly made up of German and Polish start-ups, it seemed a shame to give so much prominence to just a few firms.

That said, the Conference Centre in the middle of the grounds was packed with speakers from all walks of technological life. Covering everything from social media and mobile enterprise to data centres and business processes, the speakers from the likes of Microsoft, Cortado, and Huawei captivated audiences with insights on trends that could see businesses make better use of their resources for a reasonably small outlay.

In terms of announcements, though, there was little for analysts to sink their teeth into. Fujitsu launched its new Lifebook E Line of laptops, which all share the same standard components such as main board, drives for the modular expansion bay and AC adaptors. While the new line comprises laptops that range in size from 13.3 to 15.6 inches, Fujitsu said it wanted to combat rising management costs and security risks by standardising components and BIOS software. The laptops can be equipped with Intel Core i3, i5 or i7 processors running at speeds from 2.3 GHz to 3.6 GHz, with 2GB, 4GB or 8GM of RAM.

Acer, meanwhile, unveiled a 21.5-inch, Android-powered tablet, the DA220HQL. More of a touch-screen PC running Android, it weighs 4.8 kilograms and has no battery, meaning it’s less portable than any laptop. Acer spokesman Manuel Linnig said that the new device could be used as an “information kiosk”, or else as a device on which to surf the Web or watch videos.

Huawei also had its own announcement to make, having ramped up its European presence. The big news from CeBit was that the vendor’s servers had been certified by SAP to run the HANA in-memory platform. Huawei hoped that the announcement would make it more attractive for customers in the enterprise IT market.

Smaller, Germany-based firms launched products or solutions, too, but on the international stage, that was about the lot. Perhaps simply having a presence at CeBit was enough for most of the vendors – no doubt plenty of business was done over the course of the week – but it seems those who made big plans got the best results. After all, you can never go to CeBit without a proper plan.

In the in-memory groove

Software AG was arguably the most pro-active vendor at CeBit 2013. The firm may not have had the biggest stand at the show – though its size would still dwarf anything seen at GITEX – but it certainly showcased more new products than almost anyone else.

At a press conference ahead of the show, the firm announced Version 9.0 of its webMethods server suite, which brings in-memory technology to the Enterprise Service Bus (ESB). The vendor said that webMethods 9.0 is the industry’s first in-memory enabled ESB on the market, and it will be available by Q2.

The new version of the platform focuses on integrating big data from any source, applications from the mainframe to the cloud, and also provides support for mobile devices. Software AG said that this allows customers to access huge amounts of data and distribute the relevant information to the relevant party on any device, providing a new level of business responsiveness.

Another part of the webMethods announcement was the new Infostreams product, which brings real-time information and event streams to the right stakeholders, enabling collaborative actions and responses.

“With CloudStreams, we give customers the possibility of installing webMethods on the Web,” said Wolfram Jost, CTO, Software AG. “This will also allow the linking of public and private clouds to handle seasonal workload peaks.”

The webMethods platform is now “tightly” integrated with its Terracotta business unit’s BigMemory in-memory technology. Version 4.0 of BigMemory was also announced at the show, with the firm showcasing integration with Hadoop, support for Java 7 and the ability to deliver up to 60-percent faster data access.

Robin Gilthorpe, CEO, Terracotta, said that new tools needed to be created in order to address the growing amounts of data that organisations find themselves with access to.

“Volumes of data are increasing by between 40 and 60 percent a year, but IT budgets are not,” he said. “You’ll see 5 percent, per year, maybe, if you’re in an industry that’s doing quite well. So it’s clear that new tools are needed to address big data, and it’s not going away.”

Gilthorpe said that In-Genius can effectively leverage such huge amounts of data by analysing it in real time. Users can then take real-time action, an point that Gilthorpe was keen to make clear.

“If the world is becoming more mobile, you need to be able to push the action out to where the work needs to be done. This is a first-of-its-kind platform,” he said.

He then gave three use examples, the first in the realm of a credit card firm or bank. He said that the new product could use “extreme” data processing to match patterns and establish a profile of what normal behaviour would look like. With every transaction, he said, it would be possible to analyse whether or not it is normal, and then either block it or approve it, all in real time.

Lastly, Software AG announced the availability of ARIS 9.0, which can provide every user within the organisation with the right tools environment, product perspective and user interface, coupled with the right information, Software AG said. As shows go, it was quite a good one for this vendor.