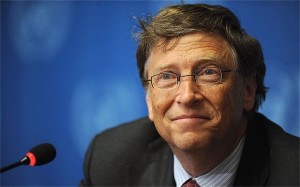 A Microsoft without Bill Gates and Steve Ballmer? Unimaginable. Unthinkable. But ultimately undeniable.

Although Ford’s chief executive, Alan Mulally, downplayed stories that reported he’s the leading candidate to replace Steve Ballmer as chief executive of Microsoft, the fact that at least one report named him as the top candidate may indicate that Microsoft’s board is looking both outside the company, and for entirely fresh perspectives.

The plot thickened on Monday when Reuters reported that three of the top investors in Microsoft want company founder and current chairman Bill Gates to step down as well. The report says the three rebel shareholders hold more than 5 percent of the company’s outstanding shares – that’s slightly more than the 4.5 percent stake Gates still holds. Microsoft, naturally, hasn’t commented. Gates, who once controlled 49 percent of the company, has steadily sold off millions of shares per year on a pre-set plan that will see him pull out of the company (financially at least) by 2018.

Gates shouldn’t leave immediately. In fact, he’s the key to ensuring a successful transition between Ballmer and the new chief executive. “Bill is involved in the search for a new CEO, and I believe he’ll stay put to ensure that the company’s direction is clear and on a solid footing as the new CEO takes over,” Wes Miller, an analyst with Directions on Microsoft, said in an email.

After that process concludes, however, it’s probably time for both Ballmer and Gates to begin winding down. With Ballmer’s tenure as chief executive ending in a little less than a year’s time (if not sooner), he’s already embarked on a farewell tour of sorts. Indeed, Ballmer’s presentation at the company’s recent analyst meeting had the tone of a goodbye.

Investors have long hoped to mount Ballmer’s head on a pike. In May 2012, Forbes named him the world’s worst CEO. And, yes, Ballmer green-lit Windows 8, which is still clawing its way to relevance. Of course, Gates famously watched the Internet pass Microsoft by, but then aggressively bundled Internet Explorer with Windows to catch up. The lesson? Microsoft makes mistakes, but also quickly fixes them.

I’ve argued before that the timing of Ballmer’s replacement will potentially undo the “One Microsoft” strategy that was introduced with Ballmer’s corporate reorganisation this past summer. Microsoft has aligned itself around a devices and services strategy, and has spread ownership of key technologies such as operating systems to various groups, rather than keeping them bottled up in individual product silos.

I like Ballmer’s vision. Hardware partners may gripe and moan about Microsoft cutting into their business, but Microsoft’s Xbox, Surface, and soon Lumia phones are potential “halo” products that should attract new customers to the Microsoft ecosystem (though, admittedly, that halo glow isn’t shining very brightly at the moment). In essence, Microsoft should set a bar for its hardware partners, and Ballmer has demonstrated the passion necessary to set this bar high. He’s got all the zest and enthusiasm that any employee might ask of his or her chief executive. He’ll be missed.

Gates may wield significant influence within Microsoft, but the man himself has moved on. Very few international institutions (the World Bank? the United Nations?) wield the political clout, dedication, and capital of the Bill and Melinda Gates Foundation. Gates may indeed have the mental bandwidth to discuss healthcare and education with global leaders, all while doodling strategies for wearable computers on a napkin. But he shouldn’t. Eliminate malaria, Bill. It’s simply more important.

What’s more, Microsoft’s shareholders and customers deserve a board that’s fully engaged with the company’s challenges. Yes, a board only formally meets once a month, if that. But Microsoft’s footing is more precarious than it’s ever been. Could a focused Gates help steer the ship? Absolutely. But with his philanthropic foundation hanging over his head? I’m not so sure. At the very least, Gates himself may have to answer some tough questions.

At the macroscopic level, Microsoft must surmount two major problems: implement a vision to guide it through the next decade and beyond, and then execute on it. The “One Microsoft” vision is that plan. And now it needs to be executed.

Microsoft may be looking for a dynamic chief executive with fresh ideas, but if the company wants to execute Ballmer’s plan, then what it’s really looking for is nothing more than a steward. Longer-term, that creates a problem. Eventually, someone in the executive ranks will be asked to change course again.

Gates could help steer that transition. Yes, he missed the Internet, but he also anticipated the wearable and tablet trends, with the SPOT watch and Tablet PC. And yet, if Microsoft’s troubles stem from a reluctance to give up on its past, then Gates may not be the right man for the job. Quite frankly, it’s all a bit of a mess.

Maybe Microsoft should compromise. An intermediary step would be to name Gates as executive chairman, a figurehead title that would preserve his legacy without giving him any real power. Microsoft needs a man like Bill Gates. But it can’t afford to keep him much longer.