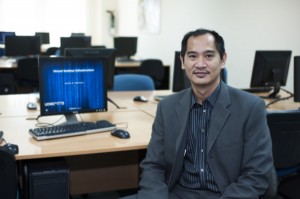 As one of the oldest and most prestigious university campuses in Dubai, the University of Wollongong in Dubai has always strived to bring the most cutting-edge technology to its Middle East students as well as providing an authentic flavour of its mothering campus in Australia. However, Joseph Aninias, Manager of Information Technology and Telecommunications Services, decided to shake off the Aussie shackles and use the initiative of the Gulf to deliver a fast and effective VDI solution.

It’s 1993 and the University of Wollongong (UOWD) appears some 7,500 miles west of its home in Australia and lands on the sands of the UAE. Two decades later and the Dubai campus is one of the most recognisable in the city, with over 3,500 students representing over 15 nationalities.

It has been its passion to drive innovation and growth in many areas which has brought so much success to UOWD over the past 20 years, but that shows no sign of slowing down any time soon. And Aninias has demonstrated this by implementing a virtual desktop solution. In 2009, the IT team was due an upgrade of its computers. However, it was during this time that Dubai was suffering from a recession and Aninias recalls that introducing a completely new technology, as opposed to a traditional computer replacement, was a difficult bargain to secure.

“Cloud was a white spec of cotton in the air at the time, and during a recession, it wasn’t the perfect time to start asking the people with the money to invest in something they know nothing about,” he says.

“We could have done a traditional computer replacement, but the technology for virtualising desktops was around – I’d already stumbled across it in my experiences. But with a new technology, you have to touch people’s mind sets, especially the ones with the money. Moreover, you need to be very transparent with the risks.”

However, fortunately for Aninias, who began his time at UOWD as a computer engineer before taking the managerial role in 2002, the new technology was accepted instantly by the business.

Once the business had confirmed the decision to implement a VDI solution during the computer upgrade, the next step for Aninias and his team was to choose the correct vendor. Aninias says that the institute conducted a number of POCs in order to really get a feel for the vendors’ solutions and make an educated decision on which would be the most appropriate for the needs of the business.

“It was a long process,” he recalls.

One of the crucial issues which couldn’t be bypassed was the fact that at such an early time of virtual adoption, not all current applications would be compatible with virtual environments – which Aninias describes, plain and simple, as a problem.

“On top of this, we also have three separate buildings in Knowledge Village, so some of our core applications aren’t in the same place. This link is also a challenge which needed to be managed,” he adds.

Another difficulty that Aninias points out is the availability of bandwidth. Covering a large area while maintaining peak performance is a challenge, but Aninias believes that students in this field demand the best performance from their institutions, and compromising on this was not an option.

“Our core business is providing for the students – the lab environment needs to be at the level they expect. We needed to focus very highly on the challenges of linking our applications, and we did solve these issues during the launch, but the key focus was always on the students and how they would respond to this technology.”

Following the POCs with VMware and Citrix, UOWD came to the conclusion that Citrix would be the appropriate vendor for its needs. Aninias says that the decision was based on three factors.

“Firstly, it was user experience – when I looked at the machine it felt the same, minimal difference to before. Secondly, the impact on bandwidth – Citrix proved themselves better than their competitors at this point. The impact on the bandwidth was significantly lower than any other at that time. And finally, overall cost was a factor. “Initially, we identified 47 percent capital expenditure, so you have to ask – what’s the cost of buying 400 new computers at one time or virtualising? This is the balance to look at and this is the decision you have to make. We wanted to save without sacrificing performance, and we’ve done that.”

Originally, the implementation of the Citrix solution was supposed to be completed in under a year. However, unforeseen circumstances presented issues during the first 12 months and it wasn’t until 18 months had passed that the system was fully virtualised.

“It was expected to be less than a year, yes, but new issues arose and we had challenges with licensing and extensive software testing – the software cycle is much faster than traditional hardware, of course.

“The project went fully live in autumn 2011. At that point, we were fully switched to virtual. But one of the major challenges we faced was that because the technology was so new, the vendors and partners were all new to it as well. We found that you do get experts in particular areas, some storage, some server, some virtual, some network, so we had to bring all of these heads together at the time for a successful virtual project – bringing all the knowledge into one common solution.”

On top of this, Aninias believes that each project has its specific requirements that cannot be fulfilled by the vendor alone, and that the end-user must have a strong amount of input in order to keep everyone moving in the right direction.

“I know my set-up and I also knew that this would only work one particular way – it was difficult to communicate that, but the vendor isn’t going to completely understand your requirements,” he states.

Since the implementation, Aninias says that everything has been running smoothly and successfully. With cost savings, added performance, added ease and less risk in downtime being the most significant results of the project, Wollongong has since decided to consider the project for other campuses. Joseph Aninias and his team can certainly be pleased with their work. However, he claims that all is not done.

“We still have challenges – we need to make some fixes and continue to focus on improving the virtual infrastructure,” the IT manager concludes.