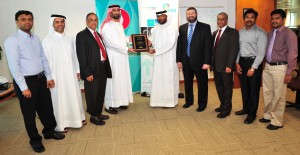 Emirates National Oil Company (ENOC) stands as the leading integrated oil and gas group in the region, with aspirations of serving the growing energy needs of Dubai. With that in mind, the IT team set about injecting a new lease of life into the company’s ECM by implementing an impressive Laserfiche solution.

ENOC, a subsidiary of EPPCO (Emirates Petroleum Products Company), is a major player in the oil and gas sector. With a wide birth of customers and employees, its emphasis on speed, organisation, innovation, and quality is vital to its performance and reputation throughout the region.

With this in mind, the company found itself struggling with content workflow and manual tasking, and decided to set about implementing a new software system, which aims to simplify its information sharing and automated operations. It was at this point that ENOC turned towards Laserfiche.

“The major challenges we were facing were difficulties in storing customer request documents in filing cabinets and that we were using SharePoint as our content management system, which is a purely Web-based system and doesn’t contain a scanning solution, so we couldn’t store electronic image documents,” says Ram Mohan Narayanan, Manager, Planning and Performance Management, ENOC.

“We came to know about Laserfiche through Global Technology Services, which is one of the subsidiary companies of ENOC and also an authorised reseller and IT solution provider of Laserfiche.”

The major issues that the solution had to address, as well as the simplification of workflow processes, were cost saving and time saving – a genuine problem for the oil and gas giant. The Laserfiche Rio system appears to have done that, according to Narayanan.

“One of the many departments that use Laserfiche Rio is the internal audit department, which automates the submission of Employee Acknowledgement and Conflict of Interest forms. This saves the company at least 6,000 hours of staff time a year, which translates to US $240,000,” he says.

A friendly referral
Prior to implementing Rio, ENOC had to go through the daunting task of discovering the appropriate solution for its needs. The company held several meetings with different vendors before deciding to work with Laserfiche.

“We did an extensive study of different EDMS tools in the market before finally deciding that Laserfiche will be the best solution to fit our requirements,” Narayanan recalls.

“Also, we did an on-site study of an organisation, which had already implemented Laserfiche to archive its customer billing documents. The success of the solution helped us to make the decision to go with Laserfiche.”

“The integration was a slightly tricky one. We had to layer the solution on top of our current ERP system. Global Technology Services helped us with that. Starting around 2011 and finishing inside six months, it was a fairly seamless integration.”

However, once the implementation had been completed, the solution got straight to work and began to attract attention from other departments within the company. Now, a total of five individual departments are using Laserfiche Rio.

Rio has since been fulfilling requirements and Narayanan claims the solution is keeping ENOC staff and customers very happy.
“We’re very happy with the solution,” Narayanan says. He gives an example of some of the content management issues which Rio has solved.

“There are around 1,500 employees available across the ENOC group and the group internal audit department faces difficulties sending each employee a soft copy of Employee Acknowledgement and Conflict of Interest forms. These forms need to be signed and returned back to HR as a hard copy. Thus the usage of paper becomes heavy. By implementing Laserfiche record management system integrated with SharePoint, every employee can now submit both the forms online in the SharePoint portal, which will then be converted to a PDF electronic file and get saved in the Laserfiche HR employee folder repository. Thus we can save at least 3,000 papers per year,” he says.

As well as this, Laserfiche has helped to speed up the card marketing department’s customer service through the Laserfiche DMS and workflow automation process. By integrating Laserfiche with interactive voice response (IVR) software, fuel card customers can now request to fax their invoices through this system.

The group chief executive and general manager office secretary uses Laserfiche as its tracking system in order to store all incoming and outgoing correspondences. And the group internal audit department uses the record management system for every employee who wishes to submit online forms, which are now saved as PDF files and stored in the Laserfiche HR repository.

Narayanan claims that the payback on the product has taken less than two years. The employees can now spend far more time on important tasks instead of wasting man hours on file locating, organising and distributing paper documents, etc.

An energetic forecast
ENOC isn’t resting on the laurels of the updated ECM solution. In fact, much change lies ahead as the company moves toward a complete re-engineering of its IT systems, including the complex upgrade of Oracle’s ERP solution.

“As well as this, we’re looking to concentrate more on document management, unifying all these document processes and more. There are some major projects to come this year and the Rio project is just the beginning of that,” Narayanan says.

Moreover, despite plans to re-engineer the entire ERP system, and the fact that the Rio solution has been consistently fulfilling requirements, ENOC has said that it plans to upgrade that very system to the 8.2 version sometime in 2013.

“It’s a good tool. It’s cost efficient, user friendly, it’s easy to configure, and it has a lot of available features.”