Upholding Dubai’s five-star standards is no easy task. Prasanna Rupasinghe, Director of IT, Kempinski Hotel Mall of the Emirates, launched a seamless guest-facing application powered by contemporary IT infrastructure that could deliver first-class HDTV and hotel services. 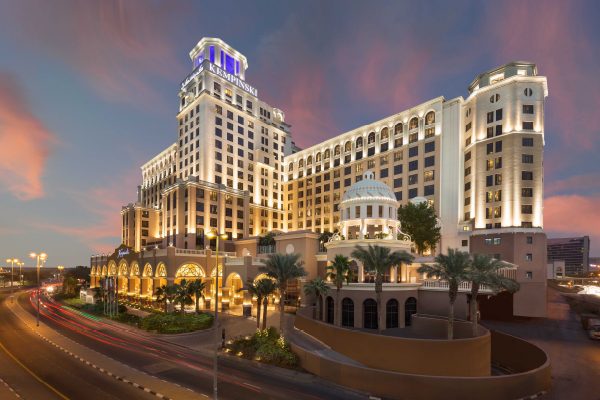 With over 300,000 guests from around the world visiting annually, five-star Kempinski Hotel Mall of the Emirates has a duty to provide a first-class stay for its guests. This includes everything: food, room quality and service, and, now more than ever, technology services.

Kempinski MoE’s Director of IT Prasanna Rupasinghe appreciates that being based in Dubai – a world leader in terms of hospitality and service – brings added pressure and expectation to the business. “Most hotels around the world can’t compete with what Dubai can offer,” he says. “Even the best that the U.S. and Europe can offer is often not up to our standard.”

The average guest at Kempinski MoE brings four or more devices for their stay, meaning roughly a million pass through the hotel every year. In addition, the hotel’s 500 staff members bring additional strain to the network.

In the latter stages of 2014, Rupasinghe decided that the best way to bring all the hotel’s services and facilities to guests through technology would be through an upgraded infrastructure, that could power a cutting-edge mobile application. The Interactive Customer Experience (ICE) app would be integrated with the hotel’s digital TV platform, automated guest servicing platform and room management system. This would enable guests to stream TV content, access high-quality wireless Internet and deliver service requests through any mobile device. “We wanted to combine content delivery, virtual systems and gaming applications into a single platform,” he says. “It would have to be a link between the guest and the hotel.”

Rupasinghe, like many other ambitious IT decision-makers working in the hospitality industry, faces a balancing act when it comes to satisfying the needs of guests of all ages. This would need to be taken into account when designing a user-friendly application. “I’m sure the typical outsider may think our job is a question of implementing the most advanced technology products, but it’s not always that simple,” he says. “We need to cater for the older generation, who are used to light switches and communicating with a human being, as opposed to a machine. By the same token, we need to satisfy millennials, who may want to avoid staff altogether and carry out bookings through a device.”

The process of designing the infrastructure that could support this application was one that had to be delivered with longevity and precision in mind. Although Kempinski MoE already had a robust IT infrastructure, the ICE app – and a vast amount of HDTV content in particular – would place all-new demands on the hotel’s network and IT resources. With this in mind, Rupasinghe drew up a comprehensive roadmap. “We built our new capacity with the potential to grow for the next four to five years,” he says. “It was important to accommodate new bandwidth needs, and remove the network’s complexity.”

One of the key initiatives was to refresh the hotel’s fixed LAN network infrastructure that consisted of core, distribution, access and server farm layers to high-density virtualised infrastructure. This would need to have minimal complexity, and have scalable technology that could prepare Kempinski MoE for applications such as full and ultra HD video, 10GE, and fully secure and simplified operating software that could meet PCI requirements.

Opting for a range of powerful technologies as part of his new solution, Rupasinghe’s aim was to deliver ‘bandwidth on-demand’ to the hotel guests. This encompassed a high-speed Internet offering from Rivernet, Avaya’s Fabric Connect for shortest path bridging, which “removed complexity, increased resiliency and increased availability” and an Aruba Wi-Fi controller upgrade. All this was brought together with the VSoft Iris digital platform, the means for delivering the app to the customer.

Rupasinghe successfully implemented the necessary infrastructure over the course of 2014 to meet his expectations of ICE’s delivery, but reaching that point was not entirely plain sailing. “We underwent a rigorous testing process to ensure that every scenario on ICE was catered for,” he says. “Things had to be standardised so as to ensure smoother operations at the back end. The front end, building management and guest room management require different pools of technology, which had to be integrated to ensure the app’s successful delivery.”

Furthermore, with downtime unthinkable for Kempinski MoE, this testing had to be carefully timed. “The hotel is not a new build, and our tests had to run while the hotel was also running, so this was tough,” Rupasinghe says. “Rooms couldn’t be made ‘out of order’ so we had to be swift in deploying our configurations when we had the chance – when a room became available for a short timeframe.”

The platform has since provided a huge service enhancement by allowing guests to interact directly with staff, and make service requests regardless of whether they are in the hotel’s grounds. “This has helped in serving guests in a timely fashion, and has reduced the average time to fulfill guest requests by almost 20 percent,” Rupasinghe says. “We have also seen a substantial increase in room service orders, which is a great sign going forward. We expect the ICE app to be self-sustainable through its proven revenue generation capabilities.” From an operations perspective, the app has also made life easier for the hotel’s employees. “Our system knows which room should be served when, so our staff are able to deal with requests in the most efficient manner possible.”

The app has also provided Kempinski MoE’s marketing team with a fresh advantage – by tying up agreements with a range of retailers in the conjoining Mall of the Emirates, targeted ads can now be pushed through to guest’s devices. “We already have agreements with brands including Burberry and Vacheron Constantin, and are in discussions with others, including the likes of VOX Cinemas and Ski Dubai,” Rupasinghe says. “A lot of our guests are either shoppers, or people who have stayed in the hotel solely to make use of Mall of the Emirates, so this is something we have to exploit. The campaign generated over $48,000 in the first two quarters of 2015, and is expected to generate more revenue going forward.”

In spite of the benefits that ICE – and the updated IT infrastructure – has brought to Kempinski MoE, Rupasinghe acknowledges that praise for his work has been scarce. “In hospitality, people tell you when things aren’t right, and good feedback is rare,” he quips. “The general rule is that if people don’t complain, things are going well. It’s not reasonable to expect them to understand the workings of the back end that go into the services they experience. Internet in hotels is now more important than having water in each room. You can go for an hour without water in a hotel room, but an hour without Internet creates problems.”

Looking forward, Rupasinghe draws huge encouragement from the progress that has already been made with ICE, but sees room for development. He is open to the use of Big Data analytics and a WhatsApp-type chat feature, as well as incorporating PlayStation 4 gaming into the service. “It’s important that we get to know our guests better without impinging on their privacy,” he says. “We have 10 years’ worth of data, but no means of drawing real value from it yet. We are working on completing room controls through ICE, and should have that completed by March 2016. The potential of ICE is huge.”