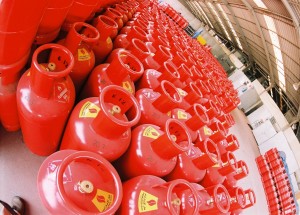 Emirates Gas is a subsidiary of the Emirates National Oil Company (ENOC). It specialises in compressing cooking gas or industrial gas into cylinders and then selling the gas on. If you’ve ever seen those trucks rolling around Dubai with dozens of red gas cylinders on the back, the chances are that the gas came from Emirates Gas.

Until recently, Emirates Gas was struggling with what could have been one of the oldest legacy IT systems in Dubai. And while the company was coping reasonably well with the ill effects of such an infrastructure, it recently decided that enough was enough, and vowed to completely rethink its ERP and business process systems, which made up about 75 percent of the business’ infrastructure.

“The entire logistics fulfillment was running on a legacy application from almost 35 years ago. It was on an access database, without a front-end,” says Ram Mohan, Manager, Planning and Performance Management, Group Information Technology, ENOC.

In addition to this, the system was put together on a standalone basis, meaning that the head office wasn’t integrated with any of the branches―each branch was running its own, individual version of the legacy application.

“The problem was, every time the data needed to brought in and consolidated, and it was not integrated into the ERP. So, at each point, there was a kind of loss of integrity. When you are consolidating all of the branches into one file, it’s a manual system, and somebody has to ensure that it’s consolidated properly and that the right dates are taken, for example,” says Mohan.

This could lead to terrible consequences, as Mohan explains: “If you get the wrong date, then you might get into trouble. Similarly, when you are putting in the journal voucher manually, you’ve got 100,000 there but if you, by mistake, write 10,000, somebody has to pull their hair out and work out where the other 90,000 went.”

There were other issues, too – because of the time it took to process invoices, Emirates Gas’s invoice cycle could take up to two weeks, which would affect cash flow. And, of course, because the system was based on an access database, there was very little by way of security. There wasn’t even any real disaster recovery plan in place. Meanwhile, when people accessed the database, they’d have to table-lock it, which locked other people out of the system while the user had the database up. All in all, there were several issues that needed addressing.

“This was 75 percent of the organisation that we were running! Obviously, every year, auditors used to come and make a comment. They’d say, ‘What are you doing here?’ Finally, in June 2012, we decided to move the entire system,” says Mohan.
Emirates Gas looked at a number of options while considering this massive overhaul. The big decision was around whether to go for an off-the-shelf ERP system that the organisation could adapt, or whether to build a bespoke system.

“ENOC as a group uses Oracle. One of the problems we faced with the ERP is that it’s a fairly strong back-end system, but we use it as a retail system. The guys come with empty cylinders, and they exchange it for a full cylinder. You have to enter the order like a cashier, and then immediately fulfill it and then it goes. That part, you either need to go for a sophisticated retail system, which Oracle has, but it costs and it’s not really relevant for this kind of thing. It’s small transactions but a lot of transactions,” says Mohan.

In the end, Emirates Gas decided to keep the back-end financials with the Oracle system, but then re-engineer the front-end logistics CPOP system into a bespoke solution.

To make the solution robust, Emirates Gas opted for Microsoft’s .NET technology, which Mohan explains helps to provide security and other features. It’s also user-friendly because Emirates Gas was already using a SharePoint portal, which the .NET system can be easily integrated with.

“But at the back-end, we kept Oracle. First of all, communication with our ERP system, which is Oracle, and Oracle is definitely more robust in terms of performance and scalability compared to an SQL server. This is the technology direction we adopted,” says Mohan.
The job of implementing the system was given to a third party, with the project manager on Emirates Gas’s side being Zahed Hussain, IT Systems Manager, Emirates Gas, who had been working with the previous system for so many years, and knew exactly where the pain points would be.

The first step was to consolidate all of the various standalone systems into one integrated system. The idea was to make everything available to anyone within the domain on the Web, and this was achieved with great aplomb. However, there were some issues that needed to be tackled.

“Yes, we had consolidated everything, but before, because everything was done on a standalone basis, if one system went down, we could just use another one. The flipside of the consolidation is that if the system goes down, we have nothing,” explains Hussain.
“To mitigate that, we set up two nodes―one disaster recovery node, and then our database servers are different, so it’s a three-tier system.”

Other fail-safes were put into the system. For example, to ensure availability, there’s an automatic system that kicks in 3G connectivity in the event of the wired Internet connection failing.

The numbers of success

Happily, all of the issues were resolved, and by the end of the implementation, things were running smoothly. For starters, the system become much more automated, so that customer orders could be entered directly into an integrated billing system.

“Previously, our bulk customers used to place an order online, which they still do, but in the previous system, what was happening was, we would manually write down the numbers that were coming into the portal, and then feed it into CPOP. Today, we have a two-way integration with the portal, so automatically, whatever comes into the portal as an order is pulled down into the CPOP, and then there’s no manual intervention there. There’s no loss of order because somebody’s missed out the order or not copied it properly,” says Hussain.

Because of this new system, Emirates Gas has been able to implement four billing cycles every month, instead of just two―improving cash flow greatly. What’s more, invoices are now sent out over email, rather than by courier. At Dh150 per envelope delivered―and a two-day delivery time―the new system has directly resulted in a saving of Dh86,400 per year. This has also reduced on Emirates Gas’ carbon footprint – the firm used to print 3,900 receipts per month, 19,000 delivery orders, 150 debit and credit card notes, and 1,085. This is the equivalent to printing 24,000 A4 sheets per month, and the need for this has been negated by the automated portal, which means that Emirates Gas has significantly cut down on paper reduction and saved Dh36,620 on paper per year.

All in all, Hussain estimates that Emirates Gas will be making Dh456,761.56 in tangible savings every year as a direct result of the new system. And this isn’t even to speak of the improved security and user experience. If a job’s worth doing, it’s worth doing properly, is the old mantra, and Emirates Gas has certainly gone about doing this system upgrade properly.