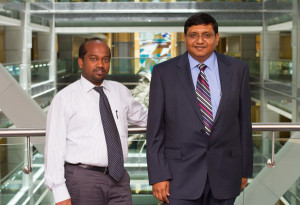 When the Commercial Bank of Dubai’s storage capacity was running out, it faced a dilemma familiar to many — increase capacity and face the maintenance costs, or take on a complete technology refresh.

Having used HP storage for around eight years, it was no surprise to Commercial Bank of Dubai (CBD) that capacity was running out. Inevitable action was required.

CBD did of course have the option to carry on with its current technology, simply adding more storage capacity and storage controllers onto it.

“We looked at what maintenance costs we were paying and what would have been the capital investment to increase capacity,” says Indranil Guha, Head of IT Infrastructure, CBD.

Guha and his team also did a case study on how much it would cost to go with a complete refresh of technology with a three-year warranty as it comes, plus the maintenance costs in years four and five, and also including years six, seven and eight.

“What we worked out was a straight-forward, clear business case in favour of having a technology refresh, as opposed to maintaining the old technology and buying additional capacity,” Guha says. “There were clear technological advantages with opting for new technology.”

The next step for Guha and Gangiah Sonaimuthu, Section Head Systems and Storage, who managed the project, was to present their thoughts to CBD’s IT steering committee, which is chaired by the bank’s CEO.

Approval from the committee came in mid-September 2012, giving the go-ahead to float an RFP (request for proposal) in the market in October.

But having found several companies to be “neck-to-neck” in their offerings, CBD asked each vendor to re-submit their financial offers at their best bottom-line prices.

“At the end of the day, it did come down to price, because all were proposing their latest and best technologies,” Guha says.

The two clear contenders for CBD were HP and Hitachi. The temptation was there to remain a customer of HP. What’s more, CBD was also impressed with HP’s 3PAR solution and commitment to help with data migration.

At the same time, Hitachi lacked references in the local banking industry. However, other aspects made up for that.

“After the final financial offers came in, we found that Hitachi was winning overall,” Guha says. “Purely because, technically, they were similar to others, but, price-wise, they were much better.”

“The model we chose was one of the leading ones in the market with all the features we were looking for at a very competitive price and very strong commitment from the Hitachi top management.”

CBD also opted for the Symantec back-up solution. “With that, we also saw a big commitment from both Symantec and the partner,” Guha adds.

A worthy risk
The decision to change service provider was not made only as the best financial decision, but also for the benefit of the market, Guha says.

“When you go for different technology provider, there’s an element of risk for any user. We were ready to take that risk in the interest of the bank’s financial model.”

And while CBD was changing its technology provider, the functioning wasn’t drastically different, due to the fact that HP is an OEM for Hitachi.

“So one degree of comfort level was already there that we knew we had already been using a technology that was manufactured by Hitachi and branded as HP,” Sonaimuthu says. “But technology-wise, it was a complete deviation from what we bought eight years ago. The model we chose was the Hitachi Virtual Storage Platform 400 (VSP400), which has things like thin provisioning, deduplication, bi-directional replication, and compression.”

After the contract with Hitachi was signed in December, the hardware was delivered in January. But with the project needing to go live by the end of February, the race was on to complete a project that usually takes a minimum of three months in just six weeks.

“This is because the business case I had shown to the IT steering committee was based on stopping the maintenance contract and utilising that money in this project,” Guha says. “Had it not been ready to go live on February 28, we would have had to pay three months extra maintenance costs.”

Thankfully, the IT team’s careful planning meant that the migration aspect of the project, which is normally the biggest challenge, was easy and smooth.

“To help with the transition, we planned a virtual layer over the storage,” Sonaimuthu says. “People really dread migrating from one technology to another, but we could hook up the HP storage under the virtual layer, and then the server sees the virtual — so it sees a storage, and it doesn’t know which product. And then we end up copying between products.”

This foresight meant CBD only had to endure around six hours of downtime, and the migration could be done at a faster pace.

The physical tests were done in the two to three weeks of time CBD had in January, and then it had 28 days to migrate 35TB of data.

“We started with non-critical systems first to get the confidence level up and the practice, because in the first round of copying, you don’t know how long it will take,” Sonaimuthu says.

Guha chimes in, adding that “it was a very stressful six weeks. Hats off to the team. They worked many extra hours and were extremely committed to deliver the project. Not to take any credit away from the partners, MDS, Hitachi and Symantec, who all also put in the extra hours alongside us whenever we called them late and at weekends.”

Whilst CBD had to race to complete its storage implementation in extraordinary time, it was able to take more time with the back-up solution, which went live on May 15.

The hard work has paid off. By doing the technology refresh, as opposed to paying the maintenance over three years, CBD has saved Dhs1.7 million. That figure increases further over five years.

The implementation has also received critical acclaim, with CBD picking up the Storage Project of the Year award at the Network World Middle East Awards 2013.

“We are very happy,” Guha says. “And what has made us even happier is that we have been able to live up to the commitments that we gave to the top management, right up to the CEO level.”