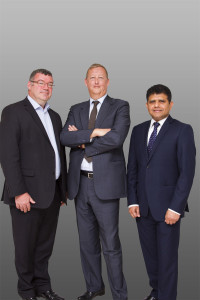 Though Kamal Osman Jamjoom (KOJ) Group has not deployed what it believes to be the current number-one solution on the market to boost its HR processes for staff, the company believes that its roll-out of Oracle Fusion will prove a winning move as the product matures into the industry’s best choice.

KOJ’s IT director has taken on many challenging tasks in the past, as highlighted in last month’s CIO Spotlight — Thameem Rizvon doesn’t shy away from a technical conundrum. However, perhaps even he would have been slightly put out by the scale of the challenge set by the business this year to transform the manual staff appraisal service for the HR department in record breaking time.

“Personally, I don’t think IT projects are IT projects anymore — it’s about the business, so it’s a business project,” says Richard Winsor, Group Chief Financial Officer, KOJ, who helped drive the project from the executive level.

“We’re trying to improve the business — we use the appraisal system to see if people are better placed elsewhere in the company. If IT owned this project, technically, it would be brilliant, but it wouldn’t be what the business wants.”

Winsor set clear objectives from the off, following the proposal from the group HR director, Martin Healey Alexander, who initiated the project.

“This was my idea,” says Alexander. “I’d been used to working in Western Europe where we were using SAP management systems, and I realised here that a lot of our processes were manual, and so we needed to automate to make the situation easier for staff. I pitched the idea to Richard and then to the board.”

Winsor adds: “What we wanted to achieve was a more proactive approach on staff rotation and internal promotions. Our system for doing this was not consistent across the business, Martin highlighted this.”

The role of IT
With that, it was down to Rizvon to come in and head the project from a technical angle. He had previously moved KOJ to the cloud with Oracle E suite a few years back, but when the company wanted to move from an on-premise model to a cloud model in 2011, it faced some challenges which would shape the decisions for the HR project from the offset.

“We stuck with Oracle for this project,” Rizvon confirms. “The reason was that we had a previous solution, and it was a great stand-alone product. It looked nice, it integrated with our other applications, and strategically, the clients in the region were strong. However they couldn’t sustain themselves. The company was bought out and it killed them — therefore we had speed issues, productivity issues, and we quickly learnt that the vendor needs to have the right strategy and cash to sustain themselves in the industry.”

Rizvon claims that he has no problem with purchasing the outsider’s product, but if that company is going to be acquired in five years’ time, then it’s difficult to predict how that product will evolve.

“The way I work is to let the users step up and fight. We still wanted to maintain our cloud strategy so we changed to ServiceNow by Oracle. And for this project we decided to stick with them and implement Fusion Performance Appraisal.”

Record-breaking implementation
Winsor says that KOJ was working on a very strict timeframe due to appraisal deadlines. He claims that although the Oracle product wasn’t the best on the market at the time, it was the best option for them in terms of its growth potential and sustainability, and in hindsight, the decision to implement Oracle could have been made sooner.

“This was a very vanilla project, very plain and simple. We put a lot of emphasis on Oracle to support us and we stated a pre-condition that they must achieve our deadlines — our other fall-backs had already agreed to our strict timeline and I think that helped Oracle to try and achieve this,” he says.

“We made the decision in January, we started the project on the 27th and it went live on March 12th — it was touted the fasted Fusion implementation in the world.”

Inside knowledge
Since Rizvon heads the Oracle User Group locally, he was able to secure a direct Oracle sponsor for the project in the form of Clive Swan, the SVP for Fusion. Rizvon consulted with Swan regarding who to partner with for the implementation, and Swan held extensive meetings with all Fusion partners; Cognizant, Infosys and Wipro.

“We told Clive (Swan) to speak to all the partners involved with Fusion and he liked Infosys. So we flew them out and they began the project for us almost immediately,” Rizvon says.

“We were the first, regionally, to go live with this, so the stakes were high. I run the User Group for Oracle here, so had there been a failure then all the group would know the details — therefore Oracle was deeply committed to this. We chose Oracle on the 15th of January, Clive approached the partners between the 22nd and 25th, and then we were away. Since the deployment it’s just got better and better because Clive is directly involved, so if we have any feedback he can relay that directly to the developers.”

ROI for business
The product itself has since been used by KOJ’s 3500 employees across its 65+ stores. The initial phase was the appraisals, which are still in progress, according to Rizvon, but obvious ROI is apparent.

“I have a status chart where I can see all of my reports here on a clear dashboard. We already have a 90 percent completion rate of phase one — I can see what’s happening at a store level which I couldn’t’ before,” adds Winsor.

“Phase two will be the talent management. Once the first phase is complete, we will have a lot of data on people, so if we get opportunities abroad, for example, we can pull information on all staff and see who will be good for these roles.”

In summery for KOJ, the group, along with Oracle and Infosys, deployed the region’s first Fusion implementation in just 32 working days, and without any investment in hardware.

The group’s strategy to continue moving to the cloud is on target and Rizvon and team appear to have set a benchmark for future Oracle deployments in the Middle East.