From improving his US house to revamping the IT department at Abu Dhabi University, Mazen Chilet is always looking to upgrade. 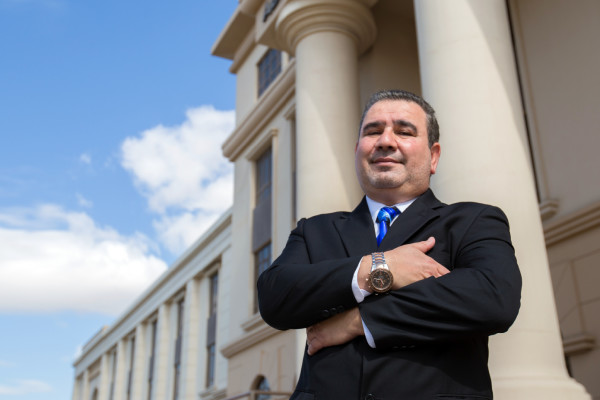 Mazen Chilet, CIO, Abu Dhabi University, has a smile for nearly everyone he meets. From the barista at Starbucks, to the students and employees he sees in the hallways, Chilet stops to chat with each one. “I learned during my career that I enjoy being out in the field – working with people. You can have all of the skills that it takes to succeed, but if you don’t know how to work with people, it counts for nothing,” he says.

Chilet was born in Kuwait, to Palestinian parents. His father, a welder, would bring home niche radio gadgets. Chilet spent his formative years learning to disassemble electronics and solder parts together. “I was fascinated by these things,” he says. “I remember a two-way radio that he brought home once. I couldn’t believe that the components would allow audio signals to be sent from one area to another. It was amazing.”

His upbringing instilled in him a strong work ethic early on. “I started working during the summers when I was 15,” he recalls. “I worked at a factory that made television antennae.” The work was not easy, and he learned a great deal. At the end of his first summer at the factory, he had amassed a small savings pot. “I bought my mother a gold ring. I wanted to do something special for her,” he says. “Decades later my mother still brags about that ring. When I got married, she even told my wife about it!”

Each summer, Chilet would work at the factory, gaining more experience and preparing for his future. When he turned 18, he decided he wanted to move to America. “My father was an American citizen, so he was able to help me with the logistics,” he recalls. Chilet was accepted into California State University and moved to Los Angeles that summer. “I had a few cousins and some family living in the US, but for the most part I moved there by myself,” he says.

In LA, he was confronted by a completely new culture. “It was definitely a huge change, but I decided to embrace it,” he says. He opted to only speak English while in America, and formed friendships with students from around the world. After entering university undecided on his course, he eventually settled on electrical engineering. “It was pretty painful at the time,” he recalls. “We were using Fortran punch cards to programme. One mistake could cost you a whole day of work.”

In spite of these challenges, in 1983 he graduated and began his career. He stayed in California, taking a job with NCR, the National Cash Register Company, just two years after the first NCR Tower Supermicrocomputer system was launched. From 1984 to 1997 he worked at NCR at various levels, completing his tenure as their Senior Systems Engineer. “There were a great number of changes during those 14 years,” says Chilet. In 1988, cash registers were introduced to the market, changing the nature of the banking industry along with the work that NCR took on.

As he climbed the ladder at NCR, his role evolved as well. “I learned that I enjoyed working in the field, and actually getting to know the customer,” he says. One of his managers at the time also had a great influence on how Chilet would treat people in the future. “His name was Chester Webb. He showed me that you always need to give people the benefit of the doubt,” says Chilet.

In 1994, while still working for NCR, Chilet decided it was time to upgrade his education. “I went for a second Bachelor’s degree – this time in computer sciences.” With a full-time job at NCR and a growing family at home, Chilet took on night classes at National University. He owes his success, he says, to his wife, whom he married in 1990. “She took care of everything,” he recalls. “I was working all day and going to school in the evening, and when I got home I didn’t have to lift a finger. She took care of the house and kids and took care of me as well. I couldn’t have done it without her, and I couldn’t have asked for a more supportive partner.”

By 1997, Chilet’s role at NCR had changed, as had he. “I think then, I just knew it was time to move on,” he says. Because he had made solid relationships with his clients at NCR, the move was easy. “My interview wasn’t even an interview. My customer at Delta knew my work, and wanted to hire me, and when I transitioned, I already knew people on my team,” he recalls.

That ‘non-interview’ was with Delta Airlines as their IT Services Provider. There, he was part of a fundamental transformation in Delta’s technology systems. Chilet took the lead on Delta Airlines Airport Renewal which would change the way the airline’s customers interacted with the company. Then on September 11th 2001, everything changed. “The atmosphere in the airports was totally different. You could hear a pin drop on the tarmac.” With the aviation industry in decline, Chilet sought a change of scene.

He was offered a position at John Wayne Airport in San Diego in 2002. “It was good to be the landlord, for once,” says Chilet. “We were able to make decisions for the airport such as requiring that the airlines move to a common-use system. My fingerprints are all over that airport,” he says, listing all of the processes and systems that his team updated there.

After four years in San Diego, Chilet made what he terms “the hardest decision in my life.” His children were nearing their teens, and he wanted them to experience their native culture. “Heritage is important,” says Chilet. “We just decided it was time that the kids had an Arab experience.” With that, Chilet took a position with the Higher College of Technology, Al Ain campus and made the move to the UAE.

“Al Ain was good for the kids,” he says of the city. “They made international friends and experienced living in the Middle East. I think it has made them more diverse, more international people as they become adults.” At HCT, Chilet revamped the IT infrastructure over his seven years in Al Ain. “We instituted a BYOD policy, and provided iPads campus-wide,” he says, recounting a few of his many projects.

In 2013, Chilet decided it was time for a new challenge. “I had actually considered moving back to the States,” he says. Instead, he answered the call from Abu Dhabi University. “I was attracted to the challenge. There is a strong team here, and we needed to transform the university,” says Chilet. He and his team went about changing the student experience. “We’ve created the My ADU portal, where students can have 24/7 access to all resources, as well as designed a mobile app and a BYOD policy,” says Chilet.

However, more than the physical IT improvements, Chilet highlights the change in communication at ADU. “I wanted more transparency between our department and the faculty. I wanted our department to stop being seen as a blockade, and truly become an enabler.” To that end, Chilet has done away with antiquated policies that hamstrung end-users, and has even begun an IT department blog, so that faculty and students can more clearly understand the reasoning behind changes in their services. “I think there needs to be trust,” says Chilet. “We need to trust the judgement of our faculty and students.”

His children are older now, but Chilet is far from settling down. In his downtime, he is a bit of a handyman, perhaps harkening back to his days learning to solder in Kuwait with his father. “In the US I built an addition to our house. I did all the wiring myself. I also enjoy working on cars – I love seeing things come together and work.” Whatever project Chilet takes on next, he will surely move forward with a positive attitude, giving everyone he meets the benefit of the doubt, and a smile to go with it.