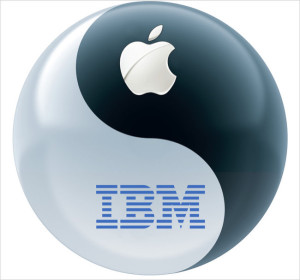 Apple will provide an expanded set of support services to IBM customers with iPhones and iPads under a new enterprise-grade AppleCare plan, the support and warranty extensions Apple has long sold to consumers and businesses.

Under the alliance announced this week between the two companies, Apple will essentially handle all telephone support, while IBM will provide optional on-site support and act as a buffer between enterprise customers and its Cupertino, California partner.
“Apple is going to do all the telephone support, IBM will do the on-site support, but there aren’t a lot of details,” said Patrick Moorhead, Principal Analyst, Moor Insights & Strategy, who was briefed by IBM earlier this week.

As Moorhead said, Apple and IBM will split the support duties, but the latter will be the primary contact for customers. “The buffer will be IBM, they speak enterprise, Apple does not,” said Moorhead. “IBM will be the single point of contact.”

Moorhead said IBM did not spell out prices for the enterprise plan, but clues can be found in AppleCare’s plan for businesses, which Apple already offers. The highest-priced plan on Apple’s website, labelled “AppleCare OS Support – Alliance,” runs $49,995 annually, and as its name implies, focuses more on operating system issues, with optional hardware coverage.

Other business-grade AppleCare plans cost between $5,995 and $19,995 annually, with a Help Desk plan – designed as a backup for a company’s own support staff, which can ring up Apple for unlimited assistance – running $2,799 a year.

“IBM will have to keep a current stock of devices,” said Moorhead, of the plan’s device replacement coverage, an inventory that will have to include older models, models that Apple may have discontinued years before. “Whenever there’s an iPad form factor change, IBM will have to keep an inventory of older models. If a company has standardised on a specific iPad model for a strategic app, or a case, on iPad 5, for example, you can’t expect that app to run or that case to fit, say, an iPad 10.”

Enterprises demand longer lifecycles for the devices they buy than many consumers, so it will be imperative for IBM and Apple to pledge longer-term support for the hardware, and for iOS, than has been the case so far, Moorhead argued.

That will run counter to Apple’s usual practice, which has been to deprecate hardware as succeeding editions of iOS roll out. When iOS 8 launches this autumn, for example, it will run only on the iPhone 4S and later, and on the iPad 2 and newer. Consumers who bought an iPhone 4 in 2010, for example, or the original iPad, which debuted the same year, will be out of luck.

Moorhead was curious as to how Apple will handle the needs of enterprises for long-lived support. “This could be really, really interesting,” Moorhead said. “Microsoft’s burden has always been its backwards compatibility, but now as Apple rolls forward it will have to support legacy hardware and older versions of iOS, too.”

Current AppleCare plans for businesses, including the pricy Alliance package, only cover the currently available versions of iOS and OS X, and as such the new Enterprise plan will have to go beyond that to satisfy companies that buy into IBM’s deals. Moorhead assumed, for a variety of reasons, that prices for AppleCare Enterprise will be even higher than what Apple now offers.

CNME
Previous Article5 things you no longer need to do for mobile securityNext ArticlePalo Alto: 178 million ME Android users at risk