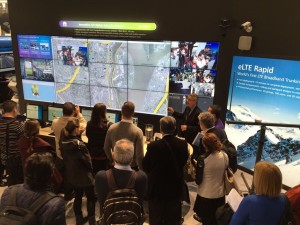 Although the show’s somewhat gimmicky theme of ‘d!conomy’ may suggest that CeBIT would be awash with wacky and trivial offerings, the reality of it was very different. Among the 3,300 exhibitors were the industry’s big hitters, who announced a number of key advancements for the enterprise.

Making the trip from the company’s Southern German HQ was SAP’s Bill McDermott, who got the conference underway with a Q&A session covering a number of today’s omnipresent IT trends. “Cloud is becoming a pervasive theme of our generation,” he said. “It’s important for companies to change, and make bold moves.” When asked about the increased prominence of digital technologies and potential subsequent changes in the job market, McDermott said that organic shifts would ensure that people would not be left out of work. “I have an optimistic view of jobs and dreams,” he said. “Ultimately, people need to deal with people; human currency is vital, whatever age we are in. The digital march is certainly on, but people need to be retrained for the digital economy. We have not had the opportunity to create certain jobs, but they will emerge in different areas.

“Companies have to be able to relate to consumers via any channel and through any device. When a company interfaces with a customer, we need to know who they are via a 360 degree view.”

Samsung used the show to officially launch its ‘Samsung Business’ division, unifying the company’s business solutions, including KNOX for security and enterprise mobility management, SMART Signage solution, the company’s printing solution and other business offerings. Company President and Chief Marketing Officer Won-Pyo Hong also echoed the Samsung’s recent drive to merge Internet of Things standards. “Significant advancements can be made in the business process through the application of IoT in inventory management, energy efficiency and more,” he said. “However, we first have to overcome the challenges of platform compatibility, data analysis and security in order to accelerate IoT adoption.”

Elsewhere, Huawei took the opportunity to make bold statements about its assault on the enterprise IT market. The firm has become an increasingly influential worldwide player, boasting a 20 percent revenue hike in 2014, up to $46.5 billion. With an increasing number of partnerships with German firms, Huawei used CeBIT to unleash four new solutions into the market. eLTE Broadband Trunking, Agile Wide Area Network, OceanStor 9000 and Next Generation Anti DDOS were the packages on offer, and the former stands out as the one that could be ideal for this region.

Following Dubai’s mandate to become a Smart City by 2020, the eLTE solution seems first in line to gain adoption in the Middle East. “What is eLTE?” Swift Liu, President, Switch and Enterprise Communications Product Line, posed to CNME. “It’s LTE on an enterprise scale, and that’s what the ‘e’ stands for. It brings 4G and LTE technology together with adaptations that can meet enterprise market needs, and is prime for supporting smart city development.”

Norman Frisch, the company’s Head of Business Development, Government and Public Sector Services, said the broader impact of eLTE could unify and catalyse the processes of data reception and analysis. “‘Smart’ means being able to intelligently react to something that happens to you,” he said. “Using the analogy of a human body, which has sensors; skin, fingers, eyes and ears, all of which are receiving data going from the spine to the brain. This is how the enterprise works. eLTE collects this data and takes it to brain.

“Traffic lights, cameras, anything needs cables that are connected to control centres, which is expensive. eLTE wireless separates technology islands that exist between public sector departments, allowing them to coordinate, which can transform lives.”

The concept of ‘Industry 4.0’ is another idea that Huawei is pushing, and could stand to bring huge change to Middle Eastern IT. The concept entails connecting up to 100 billion industrial machines which will be able to communicate with one another – thus standardising and enhancing production processes – and Lida Yan, President of the company’s Enterprise Business Group, outlined the concept in a keynote. “The core requirements for this are guaranteed latency, reliability and quality of service and bandwidth,” he said. “A major challenge of Industry 4.0 is that the current ICT infrastructure needs to be reconstructed, with connections becoming increasingly important. Industry 4.0 will be characterised by huge volume and diverse interfaces. The Enterprise Business Group focuses on IoT Gateways, which can make devices and gateways virtualised. Smart IoT gateways allow the capacity to connect more devices.”

He discussed how ‘LTE-M’ – ‘M’ standing for ‘machine’ – is a concept the company is keen to push, a high quality network that encompasses machine devices.

National Security Agency whistleblower Edward Snowden and journalist Glenn Greenwald ensured the conference centre remained packed until the very end of the show, with the fugitive joining for a video link Q&A session.
Snowden discussed the ethical implications of his decision to out the U.S. government for mining private information on its citizens, along with the impending reality for members of the public.

Citing draft legislation that is being pushed in the U.K. as a prime example of government control, Snowden revealed who he believed were the true targets of snooping laws. “Organisations like the NSA and GCHQ in Britain use ‘equipment interference’ laws because it gives them a means to hack people as well as targets,” he said. “The reality is they are looking to spy on the types of people who are in this very room – highly skilled IT professionals; the people who have access to systems, the people who control and have access to IT and critical infrastructure. It’s vital that we come together to prevent them from doing that.”