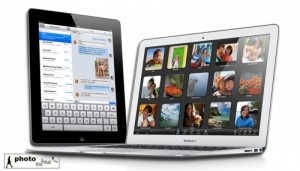 The question – whether the company’s tablet cannibalises sales of its own portable computing line – is ultimately impossible to answer, or at least quantify: One can’t look into a counter-factual crystal ball to view an alternate universe without the iPad.

But Tim Cook, Apple’s CEO, believes that the iPad does block sales of at least some Apple personal computers.

“I think there was some cannibalisation from iPad,” Cook acknowledged earlier this week during his company’s quarterly earnings call with Wall Street.

Cook offered that view while answering a question about the poorer-than-expected sales of Apple’s laptops, which were up just 2% over the same period the year before – in line with the computer industry’s overall average increase, according to IDC.

The 2% year-over-year increase in unit sales was significantly lower than Apple’s laptop line usually garners: In the first quarter of 2011, for example. Apple sold 53% more notebooks than it did the year before.

The post-New Year’s Day drop-off was also larger this year than last. In the first quarter of 2012, Apple sold 900,000 fewer MacBooks than it did the quarter immediately prior; the first-quarter 2011 decline was only 156,000.

Cook has regularly admitted the iPad’s cannibalisation impact, but has never speculated about how many Macs have not been sold because of the tablet.

“There is cannibalisation clearly of the Mac by the iPad, but we continue to believe there is much more cannibalisation of Windows PCs by the iPad and there’s many more of them to cannibalise. And so we love that trend,” Cook said in the January 2012 earnings call.

Analysts don’t know how significant iPad cannibalisation is, either, although – like Cook – they suspect it’s happening. “If there is cannibalisation by the iPad, you would definitely expect it to be in notebooks,” Ezra Gottheil of Technology Business Research said in an interview earlier this week.

And the relatively puny growth rate last quarter of Apple’s laptop sales could be caused by something completely different.

Both Gottheil and Brian White of Topeka Capital Markets noted that the MacBook Pro and MacBook Air are both due for a refresh, which may have kept informed buyers from purchasing the current models.

“The [current] Macs are long in the tooth and with expected refreshes, there might be some pent-up demand as people wait for the new,” said Gottheil.

Apple may have hinted that a refresh of the Mac is in the cards, and sooner rather than later, when Oppenheimer reported that inventories at the end of March were sufficient for 3-to-4 weeks of sales, less than the company’s target range of 4-to-5 weeks.

Like most technology companies, Apple draws down stocks as it prepares to launch new models.

Only one thing seems certain: Apple does not plan to merge the two – iPad and MacBook – into a single device to eliminate cannibalisation of the latter by the former.

Cook made that clear earlier this week when he took swings at so-called convergent devices, hybrids that blend the functionality of a tablet with the power and keyboard of a notebook.

“Anything can be forced to converge. You can converge a toaster and a refrigerator, but those things are probably not going to be pleasing to the user. “We’re not going to that party. Others might. Others might from a defensive point of view. But we’re going to play in both [computers and tablets],” Cook said.

Cook was likely aiming his words at the expected devices that partners of rival Microsoft, including Intel, have been touting for Windows 8, the operating system most figure will launch this fall.

White pooh-poohed the idea that Apple would merge the iPad and, say, the MacBook Air, its lightest-weight and thinnest laptop.

“I agree with what Tim [Cook] said. While there is some overlap [between tablets and notebooks] I think they’re really two different worlds. I don’t think people will ever abandon the notebook altogether,” White answered during an interview this week.

Other analysts have been more skeptical of Cook’s comments, and saw them as a preemptive strike against a form factor Apple actually fears.

“[Windows] notebook makers have had problems with tablets, they’re nowhere with tablets. So of course they’ll try to make it look like they’re converging tablets and notebooks. They have everything to lose by not having a tablet and everything to gain if they can convince people [these hybrids] are tablets,” White said.

“That’s why they want them to converge,” he added.