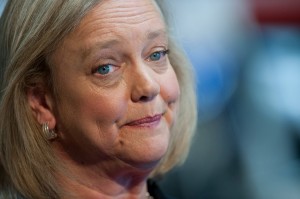 Hewlett-Packard’s bombshell revelation that it would take a US$8.8 billion non-cash writedown after allegedly discovering major accounting fraud related to its Autonomy business unit has rocked the tech world.

But the news, while shocking, could have both positive and negative results, according to who or what’s involved. Here’s a look at the winners and losers emerging from the rubble of HP’s explosive announcement.

“The silver lining here could be her willingness to take a very realistic but also gutsy stand, and call a spade a spade here,” said analyst Charles King, president of Pund-IT. “I think that will improve her image or at least provide some cover for the additional time and effort she needs to put into the company.”

“Most of the issues confronting HP happened way before her watch,” King added. “She has the unenviable job of cleaning out the stables.”

Larry Ellison: Somewhere inside one of his many luxurious residences, Oracle CEO Larry Ellison may be rubbing his hands together and cackling with glee at HP’s announcement.

But there’s also history between Oracle and Ellison regarding Autonomy and its founder, Mike Lynch. Last year, Oracle claimed that Lynch had shopped his company to Oracle before the HP deal, but Oracle rejected it on grounds Autonomy was overvalued. Lynch denied approaching Oracle, prompting Oracle to issue a statement calling Lynch a liar.

Autonomy’s competitors: The bad publicity around Autonomy may lead potential customers to seek less turbulent waters. “There have already been quite a few sharks feasting around the Autonomy whale,” said analyst Tony Byrne, president of the Real Story Group. These competitors include OpenText, Microsoft, IBM, and in the area of search technology, the open source ecosystem supporting the Lucene search engine, Byrne said.

HP Shareholders: HP’s stock fell more than 10 percent on Tuesday after the announcement, dropping to less than US$12. It had traded close to $30 as recently as February.

Leo Apotheker: If ex-HP CEO Leo Apotheker decides to seek shelter in an undisclosed location, you could hardly blame him. A former CEO of SAP, Apotheker was seen as a surprise pick to lead HP from the start, and after a series of miscalculations his reign ended quickly.

Although reports later surfaced of extreme dysfunction among HP’s board during Apotheker’s time at the helm, he has seemed to garner an ample share of blame and criticism.

The Autonomy acquisition was supposed to be a signature accomplishment for Apotheker, helping HP become a significant player in the lucrative enterprise software market. Instead, more than a year after his departure from HP, Apotheker finds himself amid a slew of controversy over the deal.

In a statement Tuesday, he said he was “both stunned and disappointed” to learn of Autonomy’s alleged wrongdoing, and will make himself available to help HP and authorities complete their investigations.

Mike Lynch: HP has said it will pursue legal actions against “certain parties,” one of whom may end up being Autonomy founder Lynch. For his part, Lynch told a BBC reporter on Tuesday that he and his former team at Autonomy totally rejected the allegations and that they were totally untrue. HP’s claims are even harder to believe given how long officials spent mulling Autonomy’s finances before the takeover, Lynch said.

The Autonomy name and products: Autonomy makes infrastructure software in areas such as data management, search and archiving. Coupled with HP servers and services, the goal was to create a powerhouse business unit.

Those plans were already coming together slower than HP had hoped, and it’s not clear whether customers will end up spooked by the accounting scandal. “I would have to say this is the kind of event that could badly if not fatally taint a brand going forward,” said Pund-IT’s King.

The fraud scandal “probably will” affect Autonomy’s fortunes “and I think that’s a shame,” said analyst Alan Pelz-Sharpe of 451 Research. “Autonomy always had very good technology, but they weren’t able to leverage it very effectively. In HP’s hands, it could be leveraged much better.”

On the other hand, Autonomy was “acting as a holding company to a large extent, anyway,” following many acquisitions. Only its core IDOL product is quite closely linked to the Autonomy name, Pelz-Sharpe said. “There are some good pieces there and still some strong brands.”

Autonomy’s customers: “The real subtext to this whole thing is that the Autonomy brand in customers’ minds was already pretty damaged,” said Real Story Group’s Byrne. “If [HP] had gone out and talked to Autonomy customers [before the acquisition] they would have found unusually disgruntled customers even by enterprise standards.”

“Autonomy was very good at concealing this through very aggressive PR and analyst relations,” Byrne added. “There was a day of reckoning coming for them, and they found someone to take them off the table before that happened.”

Some of Autonomy’s technology is very old and in need of an overhaul, Byrne said. “It was HP’s very difficult job when they acquired it to make a big R&D push and turn a lot of these platforms around. I think they hesitated a little, and this is another pretty big dent in things.”