CNME – in collaboration with Equinix – recently hosted an in-depth roundtable discussion on the challenges that CIOs are facing around their digitalisation efforts, and took stock of the progress they have made so far. 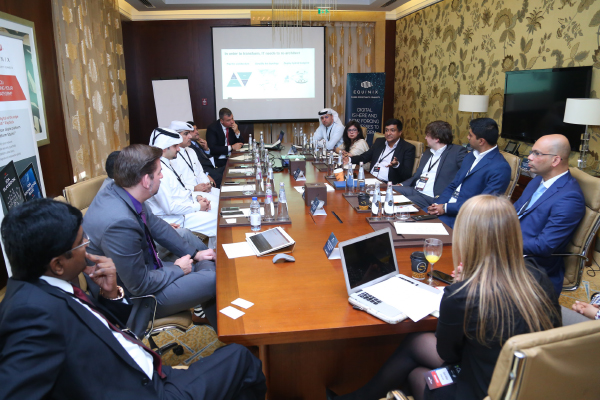 In order to successfully integrate digital processes into all facets of Middle Eastern life, businesses must develop the necessary technologies and associated human capital if they are to keep up with evolving market demands. While McKinsey places the UAE at the top of the digital-savvy class in the Middle East, there are still many opportunities to be had, with tech-savvy countries including Saudi Arabia, Egypt, Kuwait, Lebanon and Oman taking further steps in their journey.

Ronald D’sa, IT director, OSN, explained how external demands from customers were evolving at such a rapid pace that it was imperative for companies to make internal changes towards digital transformation if they were to keep up. “Being a broadcaster means that the majority of our content is consumed via mobile devices, so we don’t have the option to stay within a data centre anymore,” he said. “Our content now has to spread across the whole of the MENA region, and therefore has to be on the cloud, otherwise we will not be efficient.”

V Suresh, CIO, Jumbo Electronics, and Madhav Rao, CIO, EMKE Group, both discussed how logistical reasons were hindering businesses from progressing further with digital transformation in the retail industry. “From a legal perspective, we still need to maintain hard-copies of documents for a number of reasons. In my opinion, we still have a long way to go in terms of digitisation in this region,” said Suresh.

Christoph Lemser, CIO, Siemens Middle East, agreed, and outlined that while companies in the region were undoubtedly pushing for transformation, there were still fundamental processes that needed to be completed manually. “It’s still very common for us to need to have documents formally approved by a stamp or a signature,” he said.

Dr John Cherian, head of IT, Middle East, Turkey and Africa, Philips, alongside the other healthcare representatives in the room, spoke of the consensus that a lack of clarity around privacy and security of data were primary factors in holding back the industry from digitalising further. “We still don’t have clear-cut privacy laws surrounding healthcare data in the region, and this makes it difficult for us to progress as we’re unsure as to which data we can and cannot upload to the cloud,” he said.

Deepika Batra DiGiovine, CIO, global growth and operations, and oil and gas, MENAT, GE, pinpointed cybersecurity and data sovereignty as primary concerns in hindering progression. “Data leaving the country can make customers hesitant to go into cloud solutions, despite the fact that doing so would really give them the speed and edge application that they need to get to full-scale digitalisation,” she said.

Aliasgar Bohari, director of IT at Zulekha Hospital, was open about his own personal concerns around putting patient data into the cloud, conforming with the views of the other healthcare professionals in the room. “I am prepared to put data into my own private cloud, but I’m not ready to put data onto cloud sites that are hosted outside of the UAE,” he said.

Sridhar Kasisomayajula, CIO, Al Ahli Bank of Kuwait, shared similar concerns. “We are primarily concerned with data protection in our path to digital transformation. Digital to everyone means different things, but in my mind, it’s about automating processes so that it has an impact on the revenue side of business.”

Abdalla Ahmed Mohamed Al Ali, director of IT, DMCC, discussed how it was down to senior management teams to conduct a balance between cloud-based and on-premise data, subject to classifications and security. “Senior management want to maintain efficiency at all costs, but they also operate under the illusion that IT is a black box,” he said. “Every year, they direct us to utilise a certain budget, but then immediately question the use of the cloud when we point it out as a way to create business value. These pressures keep on coming on top of the issues we already face ourselves as IT managers. But it’s down to us; if we take this balance with a proper business use case to the senior management and make it look attractive, then they will most likely be more than happy to support.”

Lemser disagreed, and explained how adopting cloud wherever possible was Siemen’s primary goal. “I’m more of the opinion that we [the IT team] form the IT procedures, which we then have to align with our global HQ. But for us, it’s a cloud-first priority, so any form of initiative that we come up with, we have to work out how that could be incorporated into the cloud before we take it further,” he said.

The conversation then moved on to how companies in the room had progressed in their digital transformation journey so far to enhance business value and customer experience.

Mukta Arora, Group CIO, Aster DM Healthcare, discussed how the company had implemented a new initiative to monitor the behaviour of patients with chronic diseases. “There is no cure for these conditions, but from a treatment perspective, the focus is on improving quality of life,” she said. “We’ve utilised mobility, analytics, interoperability, cloud and operational modernisation to create an environment with a reminder service and a constant stream of advice to continuously keep patients on the go, give them personalised care and track what they’re doing to monitor their condition.”

Yousef Al-Sulaiti, IT department Manager, Qatar Fuel, discussed the company’s latest digital initiative involving customers making payments via an electronic chip, which will limit the possibility of any fraud being perpetrated by the personnel at fuel stations. “We looked at how best to speed up the process of filling your car and decided to make it as digital as possible,” he said.

Representing the sponsors during the discussion were Jeroen Schlosser, Equinix’s managing director for the MENA region, and Klaas Merten, the company’s global solution architect.