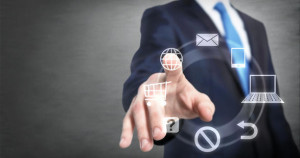 In 50 years, when we look back on the last decade we will see that although we felt like this decade has been extremely productive, all we really have done is put our existing business models on the internet. Take e-books for example. We have taken a 200 page highly textual book and simply moved into a digital medium. Why can’t we take this further? Eventually an e-book will be an interactive, highly-hyperlinked medium. Every industry has an example like that.

Occasionally, however, you see businesses taking the next step and acting as “fearless digital leaders.” For example, there is a mobile phone company in Kenya called Safari Com. They looked around at their market and realised that while many people have no access to banks in Kenya, the majority of them have access to mobile phones. In what can only be termed a huge risk, Safari Com decided to become a bank. People were extremely sceptical and as such the regulators only let them take on a small part of their overall plan. The risk paid off and the venture was met with exceptional success. The last time I looked 25 percent of Kenya’s GDP now goes through their system. Risk-taking like this cuts across traditional industry boundaries and power silos. You have to cannibalise yourself before someone else does. It is scary, but you need new skills and new ways of making profit.

The question should actually be, “What can the CIO do to become the Chief Digital Officer?” The Chief Digital Officer is actually a strategist in a digital context. It’s not IT, it is business strategy enabled by IT. As such, the position of Chief Information Officer may not be a shoe-in to transfer into the role of the CDO. If CIOs do want to make that transition, they must then lead initiatives that are outside of their control which can be uncomfortable for many CIOs. They also need to develop a great deal of additional skills. For instance digital design and anthropology—which is the understanding of human behaviour and how technology fits in. Also agility, this new role needs to be able get things done quickly. In addition they need to develop the ability to partner with start-ups which is a skill itself. The fact is that all these exciting innovations have left the big technology vendors stuck in the past. As it turns out it is a very unnatural act for a large vendor to partner with a small company. Those kinds of talents aren’t in IT departments right now so if we want to make these transitions we have to foster those skills in our CIOs.

In this region, we see a significant skills gap when it comes to IT. With that in mind, do you think we will have the local talent we need to move forward in IT in the future?

I can’t claim to be an expert on the Middle East, but I can tell you a few things that I have observed while here. First, there is an enormous humility and willingness to learn that is simply not there in all the geographies of this industry. There is also what I would term a “leap-frogging” potential. The rest of the world has an attachment to legacy IT that may end up weighing them down. I believe that the Middle East is becoming an attractive place for foreign employees to come to find work. I think that there is an opportunity to leverage the skills that are coming in from surrounding areas. For these reasons I don’t see the skills gap as a huge issue. In fact I see a huge potential for the region to move ahead beyond global competitors.

What is really the difference that we are looking at as far as digital strategy vs IT strategy?

It really is two different situations. When it comes to IT strategy, the question is how do we deploy IT to do business the best we can? It is a technical answer to a business question. Digital business strategy is really the opposite. The question with digital business strategy is given all the digital potential in the world, what can we do as a business or a government agency? What can we do with the digital potential that is out there? It is a business answer to a technical question. The Chief Digital Officer doesn’t have to panic when taking such a huge step—they can simply decide to partner with another company to make, for example, a mobile phone company into a bank. For us when we look at technology practices we look at two things. Renovate the core and exploit the new. Renovate the core is the IT stuff. However, we can’t wait for the core to be renovated before we begin exploiting the new. As such you may have to partner with outside entities to begin to do things in different ways. We can’t wait to renovate the core either, we have to do both at the same time. That is my worry for the future of the region – there is humility which can be good, but I hope that it doesn’t translate into an overdose of caution when it comes to taking on both tasks simultaneously.

There are an increasing number of Chief Digital Officers globally, but virtually none in the Middle East region. Why do you think that is?

I think it is because IT professionals in the region are focusing on fixing IT. Additionally, most people who might advise companies in the Gulf don’t really know what they mean by the word digital. There is a lot of confusion. Digital strategy can take on so many forms, there just isn’t a blueprint for how it should be done. I think people in this region are waiting for concrete advice as to how to move forward which may never come.

If we do begin taking on CDO roles in the Middle East, do you see some of the other C-Level positions phasing out or merging?

In the last 100 years there has been a lot of product and process innovation but hardly any management innovation. If you look at how management works, it is kind of the same as 100 years ago. We are still stuck in these traditional hierarchies and we desperately need management innovation. With all of the C-level roles, there are many that overlap and some that are becoming obsolete. It can really look like a mess, but I believe it is just a case of growing pains. I think that the Chief Digital Officer will be important in the interim. However, eventually, digital will just be a part of what we do and the role will be unnecessary, or rather, integrated into everyday business activities. I think we will see companies customise their C-roles. There is no reason that every company should have the same management roles. Of course there are some that will be necessary across companies—the CFO and the CEO for example—but each company needs different management leadership. I think it will be a mess for a while, but a mess is better than staying needlessly in these traditional roles that don’t serve the business as well as they should.