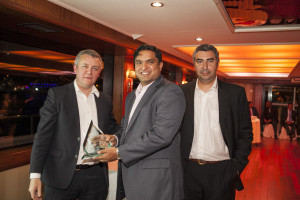 Schneider Electric has awarded Logicom the Distributor of the Year for MEA Award from APC, at its recent channel awards event.

Through its partnership with APC, Logicom was said to have developed a robust value proposition for APC, and extended its current distribution agreement with Bahrain, Kuwait, Oman and Qatar to include the UAE. This has added to APC’s penetration into both the Enterprise and SMB channels.

The award was presented by Thierry Chamayou, Vice President Middle East & Africa to Srijit Nair of Logicom, who accepted it at the awards ceremony held in May 2013 in Istanbul, Turkey. Speaking on the occasion, Thierry said, “Logicom was rewarded for its exponential growth and success with APC by Schneider Electric during 2012, specifically for having constantly surpassed their targets and helping to expand business quarter by quarter with new customers.”

This award is a great honour, according to Logicom Dubai’s General Manager Demetris Demetriou, who said that, “Logicom is becoming a focused distributor in the value added space and this award demonstrates our ability to expand A-class brands like APC by Schneider Electric within the ME Region. We would like to take this opportunity to congratulate Logicom’s APC by Schneider Electric’s  team for this great achievement and at the same time express our appreciation to the APC by Schneider  Electric’s team for their great support and guidance’’.