Fifty different innovative products, all designed, and 3D printed by school going students from across the UAE, were the hallmark of the second 3D Printing Olympiad organised by ATLAB on Friday in Dubai. 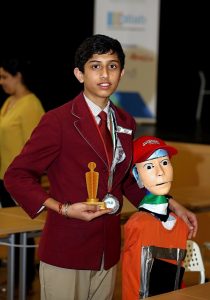 The top award in the competition went to a 15-year old Grade X student from GEMS Millenium School – Sharjah, who had developed a working model of a humanoid robot – almost complete with its torso and head.

More than 150 entries were submitted from students of various schools across the UAE, of which only 50 managed to reach the final round of the competition.

ATLAB, the technology-based company focusing on developing custom applications dedicated to humanoid robots and STEM (Science, Technology, Engineering and Mathematics) and innovation labs for corporates and educational institutions, has been the brain behind the World 3D Printing Olympiad.

Senthil Kugan, Director, ATLAB says the idea of the competition, inspired by His Highness Sheikh Mohammed Bin Rashid Al Maktoum’s vision of innovation, is to encourage and inculcate innovativeness among students. “This is the second year of the competition and the entries this year are a clear indication of significant improvement in the participation and the quality of presentations.”

Rishab Java, who designed the 3D printed humanoid, says he has been working on the project for the past eight months. The humanoid whose legs and arms are still not ready was presented to judges as a functional model that can be scaled up as per requirements.

The humanoid’s body was completely built using a 3D printer. “The only exceptions were the motors and the Microsoft Surface tablet that powers the system. I plan to self-design the robot’s arms and legs in the future,” says the 15-year-old Grade X student.

“The robot I have built is a cost-effective solution and at Dh1,800 including the tablet, is a much cheaper option. I have the arms designed and since the design was not my own I am not including it for the competition. Once the arms and legs are built, it could be about six feet tall. I have used open source software already available online to build the humanoid,” he adds.