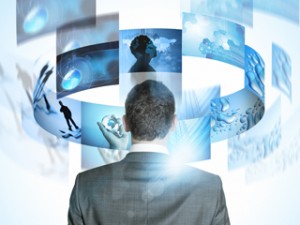 In the enterprise, the more you know about the future, the better off you are. This allows executives to make plans for deployments, deal with IT dilemmas and make sound contingency plans. Yet one trend is clear: What we know about technology now will change. Email used to be the standard for most corporate communication, but now the writing is on the wall, giving way to more immediate social transmissions. These seven trends for 2013 will likely affect many businesses of all sizes-including yours.

1.  Hospitals will move to BYOD

In 2012, the bring your own device to work concept took root. More of us started using iPads and connecting to guest networks than ever before.

Three-dimensional printing ranked among the major tech trends of 2012, mostly due to the lowering costs of the printers. What used to cost $20,000 now clocks in at under $3,000.

Today’s printers allow you to fabricate a plastic part in your own home office or small business. One interesting side effect: A company called PriveCo sells kits for 3D printing discrete products, from hair-loss products to home medical treatments.

3. Passwords will fade into oblivion

Leave it to a cover story in Wired magazine to usher in an age-old technology. Biometric security has been around for the past decade or more, but it has never taken root-yet when a hacker steals your password, he often gains access to all your secure portals.

Biometrics uses the iris in your eye, your voice or your fingerprint as a security precaution. In 2013, as we realise how passwords can be easily hacked, we’ll finally move into the age of better authentication using your own body.

One of the most interesting trends for 2013 will be the app-ification of television. We’ve seen this trend developing for years, as many viewers only watch TV via Netflix on an Xbox 360. But the trend will finally hit full stride, says Himanshu Sareen, the CEO of IT service provider Icreon Tech, because of the process of curating. What works so well for Pinterest will work the same for TV: already, there are apps such as SnagFilms that are dedicated only to obscure independent films.

5. Classrooms will go online (in a big way)

Here’s a trend businesses should watch carefully. In the past year, massively open online courses on services such as Udacity and Coursera paved the way for a new trend: Attracting legions of students to compelling user-create courses.

In 2013, these services, along with “traditional” online institutions such as the University of Phoenix, will start causing even more disruption at brick-and-mortar college campuses, according to Thomas Koulopoulosm, chairman of the consultancy Delphi Group.

This trend will impact every computer user. In the past, a strange concept called skeuomorphism took root. This design practice, akin to using leather stitching on plastic moldings, adds superfluous elements to make something look more ornate or authentic.

Experts say this trend will stop in 2013. User interfaces will go back to a more simplistic approach, a la Windows 8. The tile interface everyone loves to hate is at least clutter-free-to see a photo, for example, you click on the photo tile.

7. Internet outages will cause systemic problems

Like a swine flu outbreak, Web outages will cause more damage than they have before. That’s because one site often feeds into many others, which in turn feed to additional sites. Think of the Facebook Like button. When Facebook has a problem with its code, as it did last spring, it causes problems at thousands of other sites. One helpful tool to circumvent these problems is Outage Analyser, which can look for links between sites and root out problems.