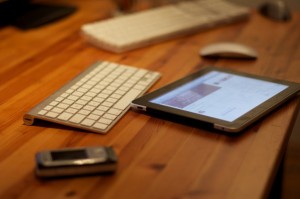 EdSouth is a bank holding company active in the student-loan arena, and Arrow Container Corp. manufactures cartons and containers. Their ideas about letting employees use their own mobile devices at work for business — what’s often called ‘bring your own device’ (BYOD) — couldn’t be more different.

“We have not adopted the ‘Bring Your Own Device’ mentality,” says Jeff Gibbs, CIO at EdSouth.

Gibbs says in moving to adopt the new generation of mobile devices for employees, it was important to standardize on a specific platform, and in this case the Apple iPhone and iPad were selected. Security is being enforced in various ways, including the EchoWorx software, which is sold by AT&T. EchoWorx is used on the mobile endpoints to encrypt sensitive data. Gibbs says it works by prompting the user for a password and encrypts e-mail messages.

For EdSouth, it was the standardization of the mobile platform that was important, and that it be the property of the company, which would be focused on more development efforts around it. Gibbs expressed some skepticism about whether BYOD would work with these requirements.

For Arrow Container Corp, based in Indianapolis, BYOD is regarded as a fundamental future strategy.

Most employees in the company, whether they be in manufacturing, shipping or sales, already have a smartphone, and sometimes tablets, too, these days, says Jason Charnov, systems administrator there. “They all have them. It’s an infrastructure that’s already there,” he points out.

Arrow Container had until recently been focused on RIM BlackBerries for staff that needed them, but the widespread BlackBerry service outage that occurred last year was somewhat of a shock, and also left the IT staff there with the feeling that there was a disadvantage in having everything centrally controlled under one model. “It’s their carrier plans, their services, their management,” says Charnov.

After that episode, the company looked at using Apple devices, but ultimately decided to provide sales people with Android smartphones. Then the BYOD idea took hold, with the first thought that if workers on the factory and shipping floor, who already seemed to be carrying around personal Androids, could be linked into the enterprise network and encouraged to solve production issues with clients directly, it would help the business a lot.

“The machine operators like the fact they’re now part of the conversation,” says Charnov, saying e-mail integration with these BYOD-welcomed Androids has begun. Charnov says the company isn’t requiring employees to buy Androids for personal use but encouraging it.

He acknowledges there’s concern about protecting sales data. Mobile-device management (MDM) software was picked as part of the BYOD effort in order to exert company controls over the personal devices. The company uses Enterproid Divide, a software-as-a-service that creates a so-called “dual-persona” environment for Android where some apps and data are cordoned off for enterprise use, others for personal use.

According to Enterproid’s vice president of marketing, Dan Dearing, Divide costs $60 per user per year, and he adds that AT&T is bundling the software under the Toggle branding. He also noted that a version of Divide for the iPhone is in early beta test.

Today, many companies are asking which side of the BYOD question they should be on.

Ovum, a technology research and consultancy firm in London, recently issued a report that asserts the BYOD trend and consumerization of mobile IT is “creating difficulties in the enterprise.” But this very challenge is also driving the fast-growing MDM market, Ovum asserts in its report, “Solutions Guide: Enterprise Mobile Device Management Vendors.”

Ovum analyst Richard Absalom estimates there are upwards of about 70 vendors in the market today with MDM products of varying types, many of them start-ups, and he says there is a rush to win over corporate customers whose BYOD strategies allow multiple mobile operating system (OS) platforms such as Android, Apple iOS, Windows Phone and RIM BlackBerry.

Data collected by Ovum suggests that in the enterprise, Apple’s iOS is the preferred platform at 40% of the MDM-managed devices, and Android, at 16%, seems to be behind BlackBerry at 24%.

Ovum’s newly-published guide focuses on about 15 of the MDM vendors. In general, the report reaches the conclusion that the MDM vendors support a wide range of mobile OSs, with their core strengths being remote-device recognition and configuration. “Their main area of weakness is still data and application security, and, with so many new players in the market, many solutions are still immature in terms of development and iteration,” the Ovum study concludes.

One main underlying problem is simply the state of the mobile OSs today, the report says.

“The limitations and lack of available APIs on these platforms are often the key factors stopping the third-party vendors from providing exactly the same data security features across every OS,” says Absalom, who authored the report.

“The constraining factors that vendors have with some of these features is that they are not supported natively on some OSs and the OS vendors have not provided the APIs that would allow vendors to provide them via their own solution. To this extent, the leading MDM vendors are held back from providing a complete, consistent cross-platform solution by the OS vendors,” he adds.

None of these defined security features is yet possible on Windows Phone, and are only slowly becoming available on Android and iOS, he says, adding, the solution to this obstacle is basically for the mobile OS providers to gradually open up to the enterprise, either supporting security features natively or providing enough relevant APIs for third-party MDM vendors to support them as part of their solution.

Absalom says Ovum’s report isn’t a ranking of vendors, but he adds enterprise mobile specialists that lead the way in terms of their “core MDM feature sets” include AirWatch, BoxTone, Fiberlink, MobileIron, SOTI and Sybase. “Some of the bigger names such as McAfee, Symantec and IBM are still relatively new to the market,” he notes, perhaps with “less mature and developed solutions,” but “with their brand strength and reach, we expect them to quickly grab market share,” he says.