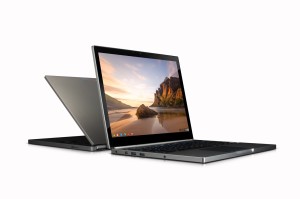 Chromebooks, the stripped down “laptops” running Google’s web-focused Chrome OS, have almost no presence in the market, after two years. But a new report from Forrester Research says these “post-PC” devices could fill a niche, or more than one, in the enterprise.

That’s because for users who can be well served by online applications, tools and services, Chromebooks are an inexpensive alternative to traditional enterprise laptops. And for IT groups, Chromebooks can radically simplify the costs and time of PC maintenance, upgrades, and troubleshooting.

“Let me first be clear that Chromebooks won’t replace all or even most Windows PCs, Macs, and tablets,” says J. P. Gownder, vice president and principal analyst for infrastructure and operations at Forrester Research, in a blog post introducing the report this week.

And web usage data from earlier this year certainly bears that out. The Chromebook was touted by some as a “Windows killer” when first released in June 2011. In April 2013, a web traffic monitoring service found that Chromebook use accounted for about 2/100 of 1 percent of all traffic, as noted by ZDNet’s Ed Bott, in a blogpost.

“Put another way, that figure suggests that in nearly two years on the market, all of those Chromebooks have achieved a smaller percentage of usage than Windows RT earned as of January 2013, after only three months on the market. Windows RT has been widely considered a disappointment,” Bott wrote.

Then why does Forrester’s Gownder think Chromebooks deserve reconsideration by corporate IT groups and users? They could fit corporate needs for companies that are:

*Willing to segment employees into classes with different computing needs that can be met with a mix of PCs, tablets, and Chromebooks

*Adopting Google services such as Gmail and Google Apps, either on a corporate-wide basis or for a subset of employees

*Considering Chromebooks for customer-facing applications, such as a service kiosk.

“As one IT leader told me, ‘instead of spending time installing software on laptops, or creating images, I’d rather have my desktop services people work on implementation of technologies related to location awareness or 3D printing,'” Gowdner writes. “The CIO of another company added, ‘I want to get out of the laptop business.’ Chromebooks offer high uptime, low service costs, and scalable deployment of new web-based applications and content.”

Currently, there are a half-dozen Chromebook models, starting at $199, on Google’s website. They run an implementation of the open-source Chromium OS code, designed for fast, flexible Web-facing interactions. The Chromebooks “live” on the Internet, accessing applications, data, and services there rather than on a local hard disk.

Enterprises most likely to heed Chromebooks are those that have or are embracing Google Gmail instead of the long-time enterprise standard, Microsoft Outlook. “A move to corporate Gmail remains pretty much a prerequisite to the adoption of Chromebooks,” writes Gownder. “Once Gmail is in place, Chromebooks can promote collaborative work styles. One CIO reported that workers at his company started to use Google Drive and other collaboration tools ‘organically and automatically’ after the adoption of Gmail. Chromebooks reinforce the value of these tools and represent the next logical step in empowering collaboration.”

Gownder’s assessment raises a number of questions. Can Chromebook users ever be anything except a very limited niche? If there’s a mix of Windows laptops, iOS tablets, and Google Chromebooks, how does the enterprise maintain and protect data consistently in three disparate environments?

Are there jobs, people, applications in your company that are a fit for a Chromebook? Or are you already using them, and if so, how?