Realme 6 is the Chinese firm’s latest midrange offering that combines style and affordability. 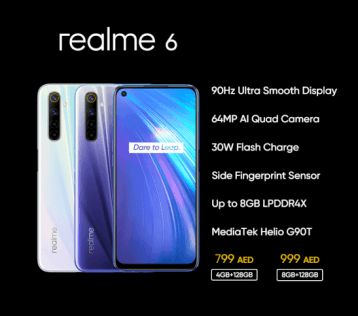 With the Realme 6, you will find a typical budget smartphone build but with an edgy and feel.

The device’s rear is made of polycarbonate plastic while the front panel is protected by Gorilla Glass 3. On the front of the device, Realme has opted for a punch-hole cutout on the top left corner of the display to house the selfie camera instead of a waterdrop notch.

If you prefer gadgets that have a nice clean and sleek look, then the Realme 6 will not disappoint. In typical Realme fashion, the back of the smartphone features a glossy design that refracts light in a slanted manner down to the bottom of the phone. The company has dubbed this as the Comet design, hence, both iterations are called Comet White and Comet Blue. However, the plastic back also means that the device is more prone to scratches.

On the back of the device, you can find the linear quad camera setup. The camera bump is quite substantial, which causes the phone to rock a bit when placed on a table. Fortunately, the Realme 6 ships with a clear TPU case, which solves both the scratch and the camera bump issues.

The left edge of the device has the volume rockers along with the slot for the tray with space for dual SIM cards as well as the SD card slot. Meanwhile, the right edge of the device you will find the power button, which also houses the capacitive fingerprint sensor. At the bottom edge, you will find the 3.5mm headphone jack, USB-C charging port, speaker grill and the microphones.

Moving on to the display, Realme 6 boasts a 6.5-inch IPS LCD display with a 1080 x 2400 resolution. The display produces vibrant and accurate colours. When used outdoors under the sunlight, the screen is quite visible. It also has good brightness levels and allows display temperature customisation to avoid any glares.

Realme also touts a 90Hz refresh rate for the Realme 6, which makes scrolling through the smartphone’s interface and gaming much smoother.

The smartphone performed fluidly and seamlessly kept up with multiple applications including browsing through social media and other typical smartphone activities. The device is running the Realme UI version v1.0 that is based on Android 10, which enables a fluid interface.

The Realme 6 sports a quad-camera setup, which includes a 64MP main camera, an 8MP wide-angle lens, a 2MP macro sensor and a 2MP monochromatic sensor for depth sensing. Meanwhile, the selfie camera has a 16MP sensor.

The primary camera takes decent photos, however, the images can sometimes look over-processed with high amounts of sharpening. As for the selfie camera, when the lighting is ample, it takes good pictures but starts to struggle in low light.

With a 4300mAh battery, the smartphone lasts an entire day of usage, which includes gaming, browsing and streaming content. It also comes with a 30W fast charger, and juices up the phone from 10 percent to 100 percent within an hour.

Overall, if you’re looking for an affordable smartphone with an amazing battery life, excellent day-to-day performance and a smooth interface, then the Realme 6 can be the phone for you.