Spotify’s new Connect service was launched this week and audio device makers used the IFA electronics show to launch the first wave of products that tie into it.

I tried it out with the Yamaha RX-A830, an €849 ($900 in the U.S.) audio receiver that also supports Pandora and Rhapsody streaming on some models. 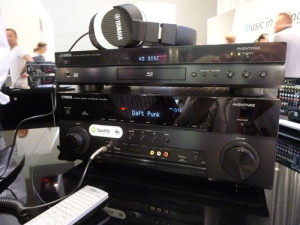 To use the feature, you’ll first need a Spotify Premium account. These cost €10, £10 or $10 depending on your country. And you’ll also need to download the Spotify Connect app, which is currently available for iPhone and iPad. Android and desktop versions are promised “in the coming months.”

The service works in a similar way to the Google’s recently-launched Chromecast dongle for TVs.

Like Chromecast, the device is controlled from a smartphone or tablet PC while the actual streaming takes place directly between the device and Internet source. This is a step away from the current method of streaming video or audio via the phone or tablet to the TV. 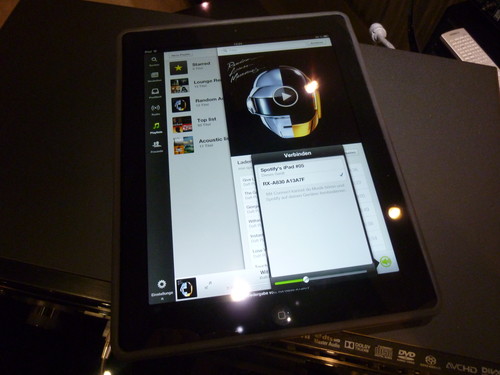 The change means the phone isn’t continually tied up streaming and can even be switched off or taken away without affecting the stream.

On the new Yamaha receivers, the control with the receiver is accomplished via the Internet and can take place from anywhere with a connection. So, while the receiver is fixed in, say, the living room, the controlling device doesn’t necessarily need to be on the same network. It could be on a different wireless LAN or connected via a 3G cellular signal from anywhere in the world. 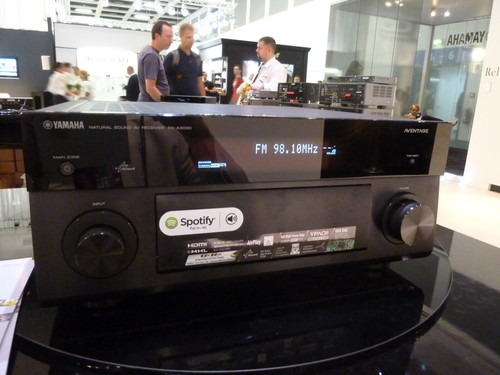 Setting up the service is quite simple. Your audio gear needs to be connected to a network and registered with your account in Spotify. On the RX-A830 this done using an Ethernet cable.

Once connected, control was easy through the Spotify app. The app on the Yamaha booth had a couple of devices registered, so I first chose the RX-A830 receiver. Then it was as simple as clicking on a song to play.

The instruction to stream the song is sent from the app to Spotify which sends the music directly to the RX-A830. It all happened without any perceptible delay. 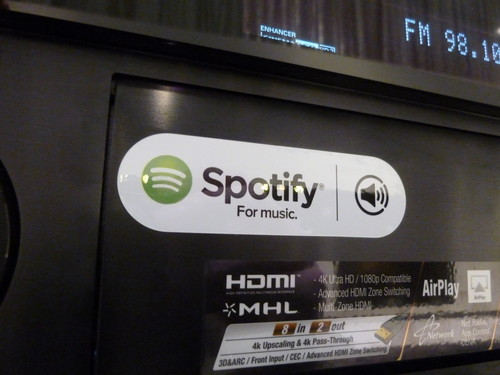 Songs can be played, skipped or paused using the app or through the RX-A830’s remote control. The app also displays the current volume level of the RX-A830 and you can adjust it.

The shift of streaming from being via the phone to direct to the audio device is what’s most useful. No longer is Spotify tied to a computing device.

While Yamaha’s demonstration at IFA worked without any problems, the company said the firmware for the service wasn’t quite working perfectly. It expects an update in the coming weeks that will fix any lingering problems with this new feature.