If smartwatches ever become an accessory that we buy as a necessity rather than luxury, the Gear S3 will be the device to go for. 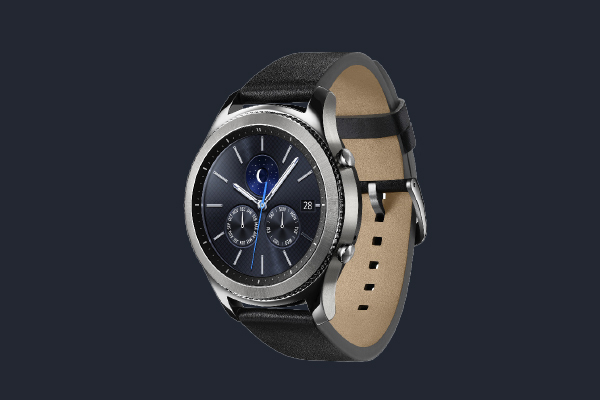 When Samsung released the Tizen-powered Gear S2 in 2015, it’s safe to say that it ticked a lot of boxes as far as smartwatches go; from design to functionality, to the user interface and all the way up to its compatibility with non-Samsung Android phones. Building on that very good foundation is simply the next logical step.
Enter the Gear S3. Launched in October last year, Samsung’s latest smartwatch offering is bigger, faster and feature-rich as compared to its predecessor.

“Big” time
The first thing that grabs your attention with the Gear S3 is its size. It’s big – really big. It has a 1.3-inch super AMOLED display with Corning’s Gorilla Glass SR+ panel that’s noticeably larger than its predecessor’s 1.2-inch one. In addition, it is also 1.5mm thicker and 10 grams heavier. The size of the device makes it a smartwatch that’s not for everyone. Some may find it too big for their liking especially to those with slender wrists. Nevertheless, despite the heft, it wasn’t uncomfortable to wear in the slightest.
The Gear S3 Classic, as the name foretells, has a more classic look with a silver metal body and leather straps. The band has a standard 22mm design with quick-release pins. The standard connection also means you can swap in whatever band you want.
The device also has a more rugged version – the Gear S3 Frontier, which comes with a black metal body and silicon strap with textured pattern that gives an illusion that it’s made of carbon fibre.

The right turn
Another key feature that the Gear S3 has is Samsung’s patented rotating bezel, which is integral to both the look and function of the device. The UI follows a circle within circle approach, allowing you to make the best use of the rotating bezel. Turn it clockwise to find all your notifications in one place. Spin in the opposite direction to breeze through the different widgets you have added into your device.
A clever functionality of the bezel allows users to rotate it and respond to calls or silence alarms. In theory, users can also use the bezel to play games on the Gear S3, however, it is not ideal as precision control using the bezel can be tricky for some games. Furthermore, it is also important to note that a number of games or apps are not available on Tizen.

Under the hood
There are quite a few differences between the two versions than just style: The Classic has a standard Bluetooth/WiFi/NFC radios, while the Frontier has an additional LTE radio for messaging, voice calls and the occasional SOS from the wilderness. Everything else is the same across both models like the heart rate sensors, a 1GHz dual-core Exynos processor, 768MB of RAM, IP68 waterproofing, 4GB of internal storage and MST (magnetic secure transmission) for Samsung Pay transactions.
The Gear S3 also packs in more sensors including an accelerometer, ambient light sensor, barometer, gyro, and a heart-rate monitor. There’s also a speedometer to measure top speed onboard the smartwatch.

Long battery life
Perhaps, one of the most commendable features of the Gear S3 is its battery life. Both the Classic and Frontier models come equipped with a 380mAh battery. Samsung claims that this can last up to four days on a single charge. But with the always-on mode, Wi-Fi and Bluetooth on, the brightness on the higher side, and location turned on it mostly lasts for a day and a half to two days maximum, which is still quite impressive as far as battery life goes.
All in all, despite the big size of the watch and the lack of Tizen compatible apps, the Gear S3 is pretty strong contender in the smartwatch market. While owning a device like this is still a novelty to some if you’re looking for a premium wearable to pair with your Android device the Gear S3 is something you should consider.
Price: AED 1,399