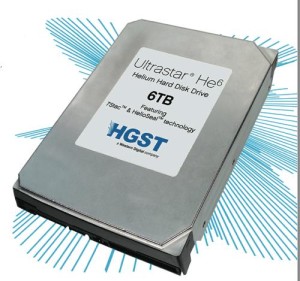 The new 3.5-inch Ultrastar He6 hard drives are currently designed for the enterprise market, offering 50 per cent more capacity than HGST’s 4TB drives.

Helium is one-seventh the density of air, which translates into less drag on the hard drive’s moving parts. That adds up to a smaller amount of turbulence and less heat inside the drive. With less turbulence and heat, you don’t need as much power to run or cool the drive.

The He6 also crams more platters into the same space. HGST’s 4TB models, for example, offer 5 disks, while the Ultrastar HE6 can pack seven disks without increasing the size of the drive.

Chill out, bro
HGST is hopeful that its helium drives will prompt advances in liquid cooling technologies for data farms. Technology makers are always weighing tradeoffs between higher amounts of computing power versus the burdensome cooling systems required to stop PCs, gadgets, and servers from overheating.

Liquid cooling systems and even mineral oil baths are just two of the cooling methods that have been explored in recent years to deal with this problem. HGST says that since the Ultrastar He6 is hermetically-sealed, using a process the company calls HelioSeal, these drives can withstand contact with liquid where traditional drives couldn’t.

Spill-resistant keyboards are great, but if HGST’s sealed drives filter down to consumer devices it sounds like they could save you from data loss after an accidental coffee or soda spill on your laptop.

Regular consumers may not be able to get their hands on a helium drive yet, but HGST has some major corporate and institutional clients lined up for the new drives. Netflix plans on using the drives for its Open Connect platform that places servers cached with Netflix content as close as possible to home connection such as ISP data centers. Huawei wants to create storage applications with He6 drives, and CERN, the Switzerland-based home to the world’s largest particle accelerator, has high hopes for using the He6 s in its server infrastructure.

Pricing and availablilty for the He6 was not announced. HGST says it will start by shipping the drives to “key OEM, cloud and research leaders” that are working closely with the company. Here’s hoping the technology winds up in everyday hard drives sometime down the line.