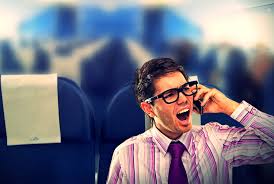 Anyone who dreads hearing one end of a loud phone call all the way from Anchorage to Miami, take heart: the plan to allow cellphones on planes could fail in more ways than an overbooked flight at a snowbound airport on Christmas Eve.

On Thursday, the U.S. Federal Communications Commission said it would consider a proposal to let airlines allow passengers to use cellular services while in flight. The services would use special onboard cells instead of regular towers on the ground and wouldn’t be allowed below 10,000 feet. The FCC is scheduled to discuss the subject at its next public meeting on Dec. 12. If the agency adopts the rule, it will be up to airlines to install the onboard cells and decide whether passengers can talk, text or use cellular data.

Nearly everyone welcomed the Federal Aviation Administration’s decision last month to let travellers keep electronic devices on from gate to gate, but allowing cellphone calls in flight is another matter. A flight attendants’ union came out strongly against the idea, polls indicate most consumers are worried about it, and a congressman who has fought in-flight calling in the past may revive a bill that would ban it.

“Just imagine the nightmare. You’re sitting there in coach, three across, and you’re in between two people who are yelling on their cellphones,” said Rep. Peter DeFazio, a Democrat from Oregon. “You can’t sleep, you can’t work.”

In 2008, DeFazio introduced the Halting Airplane Noise to Give Us Peace (HANG UP) Act, which would have limited in-flight wireless services on airliners to data. The bill failed, but DeFazio said he probably will reintroduce it, if only to give opponents of the FCC’s plan something to rally around.

But even if the FCC lifts its rule, which was imposed in 1991 to prevent disruption of ground-based cellular networks, nothing will change in the U.S. unless airlines and service providers see a viable business in phone calls, analysts said.

History is not encouraging, according to Roger Entner of Recon Analytics. An earlier in-flight phone service, Verizon Communications’ Airfone, used wired phones built into seatbacks and linked them to the ground via satellite. But most fliers balked at the high per-minute cost of using Airfone and Verizon shut the service down in 2006. In-flight cell service is offered on some airlines outside the U.S. at rates similar to international roaming, but it’s not yet clear whether it’s a moneymaker, Entner said.

“Somebody would have to make a leap and make it affordable, and hope there’s enough volume coming,” Entner said.

U.S. airlines had a chance to allow voice calling through Internet services such as Skype when they installed in-flight Wi-Fi, but they have kept it off limits. Delta Air Lines reaffirmed this policy last month when the FAA opened up device use.

In a survey last year by the Consumer Electronics Association and the Airline Passengers Experience Association, 61 percent of respondents listed voice calling as a part of the in-flight experience that should be restricted. An informal online poll by Network World on Friday got similar results: By late in the afternoon, 74 percent of voters had opposed the FCC’s plan.

OnAir, not surprisingly, came out in favour of the proposal. In a statement, the company downplayed the social hazards.

“Forget the hyperbole about the chaos inflight cellphone usage could cause. The issue simply hasn’t arisen anywhere in the world in the past six years,” CEO Ian Dawkins said. “An aircraft is a noisy environment, so the sound of a conversation doesn’t carry very far. Flight attendants can also control the use of Mobile OnAir by disabling the voice element during quiet times, such as the plane’s night.”

Rep. DeFazio questions why it’s even necessary to take the risk if data services provide numerous ways to communicate silently while in flight.

“What is to be gained in a very small tube, which echoes, which is already a very tense environment?” he said.