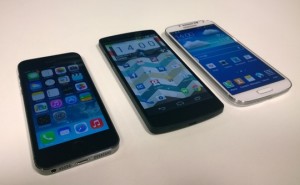 Samsung officially unveiled the Galaxy S5 on Monday at a Mobile World Congress presentation in Barcelona, touting a slimmed-down approach to the latest flagship’s feature set and simplified design.

It’s a small but notable departure for the South Korean company, whose devices all too frequently combine undeniable engineering brilliance with a glut of marginally useful features. Co-CEO J.K. Shin and other Samsung executives who presented at the event were eager to talk up the way in which the company had listened to input from their customers.

The Galaxy S5, therefore, has a far more streamlined feature set than its predecessor, focusing more heavily on core functionality and pushing technically impressive but only situationally useful features to the background. So how does it fare in a comparison with two of its major competitors, the Google Nexus 5 and the iPhone 5S?

The current standard for major new Android devices is a roughly five-inch, 1080p screen, and that’s exactly what the Galaxy S5 delivers. Part of the reason that’s a standard in the first place, however, is the Nexus 5’s nearly identical display, though the Google device (it’s actually manufactured by Samsung rival LG) has a slightly smaller viewable area. The iPhone, by contrast, has a much smaller 640×1136 screen, but then, it’s a much smaller phone in general.

There’s little to separate the two Android devices, but both pack more impressive displays than the Apple entry – if you’re OK with a bigger phone, that is.

Once again, it’s essentially a tie between the two Android devices in terms of which packs more core processing horsepower. The Galaxy S5, however, does have a slightly more recent model of Snapdragon SoC than the Nexus 5 (Snapdragon 805, rather than Snapdragon 800) which could give it a moderate performance edge – a 2.5GHz quad-core CPU instead of the Nexus 5’s 2.3GHz, and a more cutting-edge Adreno 420 GPU instead of the Adreno 330 in the older model.

Again, the iPhone 5S lags behind, featuring 1GB of RAM to the 2GB present in both Android devices, and a slower 1.3GHz CPU. However, the Apple device does feature a muscular PowerVR G6430 GPU, which blew many benchmark scores out of the water at release – though handicapped a bit by its CPU, the iPhone 5S is no slouch in the graphics department.

There’s little to choose between on all three entries here – the majority of customers, we suspect, will want either 16GB or 32GB of internal storage, and those options are available on the Galaxy S5, Nexus 5, and iPhone 5S. The latter device also has a 64GB option available, while the Galaxy has an SD card slot for expandable memory.

In purely megapixel terms – which is far from the last word in camera quality – the Galaxy S5 is the clear winner, boasting a 16MP main shooter that can also capture 2160p video at 30 frames per second. Both the Nexus 5 and the iPhone 5S feature 8MP cameras on their backs, with minor feature differences, like optical image stabilisation for the Nexus and some advanced flash technology for the iPhone.

Samsung’s device has a similar slight advantage in terms of its front-facing unit, featuring a 2MP camera that can record at 1080p, compared to 1.3MP (about 720p) on the iPhone and Nexus.

The Nexus 5 falls behind here – which may not be a bad thing, depending on your opinions about the need for things like heartbeat sensors – but the Galaxy and the iPhone boast an impressive array of additional capabilities, including fingerprint sensors and the aforementioned heartbeat tracker. (Samsung’s version of the latter system, which is integrated into a suite of fitness-focused apps, is probably more impressive, while Apple’s fingerprint scanner doesn’t require a swiping action.)

Possibly the coolest feature, however, is the Galaxy S5’s water and dust resistance – it’s the kind of feature that makes you wonder, “why doesn’t everybody do this?” OK, the Galaxy won’t exactly be indestructible or waterproof – I personally am interested to see some independent testing of Samsung’s durability claims – but it’s still a big deal, particularly to the clumsy among us.

The Galaxy S5, again, is the winner on paper, featuring a 2,800mAh battery, compared to 2,300mAh for the Nexus 5 and 1,560mAh for the iPhone 5S. (In the latter case, it’s important to bear in mind that less power is needed to run the smaller screen.) That said, effective battery life is more a matter of management than raw milli-amps, though they don’t hurt either, so it’ll be interesting to see independent verification of Samsung’s assertions about energy efficiency.

At a glance, the Galaxy S5 looks to be a step up on the Nexus 5. While it doesn’t blow the older device away in any one area, it boasts a number of small advantages that eventually add up. Given that, however, it’s worth keeping in mind that the Nexus 5 starts at $350 direct from Google, no contract required – a price point that Samsung will likely be unable to match. (Obviously, those who don’t mind signing a new contact will be less affected by that, though.)

Similarly, the Galaxy S5 is a more impressive device than the iPhone 5S in purely numerical terms – it’s bigger, newer and more powerful. But Apple’s impressive attention to fit and finish should still sway many buyers, and the major difference in form factor makes an apples-to-oranges comparison somewhat unfair. As ever, the decision will likely be based on what an individual consumer wants from their next smartphone.