Mozilla yesterday updated its free Firefox for Android web browser for smartphones running version 2.2 or later, claiming dramatic performance improvements from startup and page-load times to panning and zooming and in its own BrowserQuest HTML5 web app. We took version 14 of the mobile browser for a spin to verify those claims. 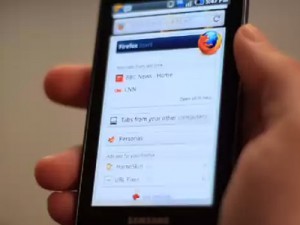 Mozilla already has tough competition in the desktop browser market in the form of Google Chrome, but its latest Firefox for Android release reveals several steps the company has taken in damage limitation for when Google eventually replaces the stock Android browser with Chrome. First up is a redesigned user interface, now referred to as the Awesome Screen. It’s fresh and good-looking, but a little busy. From here you can quickly navigate to your top sites and tabs from your previous session, access bookmarks, tabs and history through the Awesome Bar, import data from your desktop browser using Firefox Sync, and install add-ons. To open a new tab you simply click on the + at the top-right, and we ran 14 at once with no problems. The only thing missing is instant search results for sites you haven’t previously visited.

Firefox Sync is very easy to set up. You simply tap the button on the Awesome screen, then enter into your desktop browser the code it returns. If you haven’t already signed up for Firefox Sync you’ll need to do so now, then click the Continue button to trigger the import. You can specify what data should be kept in sync, but only through the desktop browser’s settings. With Firefox as the main browser in use on our desktop, we found it took only seconds to import the more than 350 bookmarks, extensive browsing history and other data we had stored there. Once configured, having this data to hand will make mobile browsing with Firefox for Android a far more intuitive experience.

The number of add-ons available to download is still very low; for example, we found just one add-on in the Experimental category and none at all in Device Features & Location. However, like Firefox Sync, the configuration process is a doddle. Currently featured add-ons on the Awesome Screen include Full Screen, URL Fixer, CloudViewer and Phony; you can also access the Add-ons Manager through your smartphone’s Menu key. URL Fixer is perhaps the most useful, given the difficulties some of us experience in accurate typing on a smartphone.

The mobile browser uses the same code as the desktop version of Firefox; as such, many features found in the full-blown Firefox are also present here. In terms of security, Mozilla offers Do Not Track, to prevent websites keeping tabs on your whereabouts for the purposes of behavioural advertising, and Master Password, to safeguard the various other passwords you use on your Android smartphone and leave you with just a single login to remember. You can also clear your history and browsing data and disable cookies from the Settings menu (press your phone’s Menu key to access this).

Other features in Firefox for Android 14 include the ability to save pages to PDF, utilise a download manager, share web pages via social media, email or send them to an offline reader app, and zoom in using pinch-to-zoom or a double-tap. The browser is also said to include smart font inflation, making it easier for you to read small text.

And then there’s the performance. When we first looked at Firefox for Android in August 2011 (turn the page to read our original review), we found it sluggish. It took around 3 seconds to load on our Samsung Vibrant, and was a relatively large download at 14MB. The update version is larger still, at 17MB, but our first impressions were much improved. Better yet, the browser loaded in less than half the time on our Sony Ericsson Xperia Arc, and websites also felt much snappier in use.

Mozilla has also measured Firefox for Android’s canvas rendering performance – using its own Eideticker Canvas Benchmark. It cites a score of 39.3fps in this test, whereas its predecessor scored 13.2fps and the next fastest browser, Opera, 21.6fps. In fact, based on these results, Mozilla says Firefox for Android is now two times faster than the stock Android browser.

Firefox for Android certainly feels significantly faster than the Android browser, and we’ve been impressed with the apparent performance of this release, but we weren’t about to take Mozilla’s word for it. We used the independent SunSpider test on our own Sony Ericsson Android Gingerbread handset to measure browsing performance; we recorded 2,880ms using Firefox for Android 14, and 3,383ms using the stock Android browser.

Mozilla has also built Flash and HTML5 support into the browser, making the platform more appealing to web developers and opening up a range of content for playback on your Android smartphone.

If you’re still using the stock Android browser that came preinstalled on your smartphone, stop! Firefox for Android 14 is significantly faster, and comes with several useful features, including Firefox Sync and Add-ons, which make this a strong companion to the desktop browser.