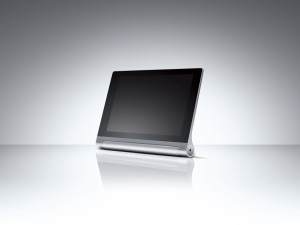 Chinese tech giant Lenovo recently released an upgrade of its Yoga Tablet range, which is distinguished by the cylindrical spine that carries its battery, and doubles as a stand.

They’ve taken the unorthodox measure of releasing the Yoga Tablet 2 range in both Windows and Android operating systems, but I took the 10” Android version for a spin.

The Tablet is powered by a 1.86GHz Intel Atom Z3745 processor and features dual band Wi-Fi and a micro USB port. It has an 8MP rear camera and front-facing speakers enhanced by Dolby Audio and Wolfson Master HiFi.

These speakers are an experience enhancer, but they do lack bass and can distort slightly at very high volumes.

Software flexibility comes in the new Android versions of the Yoga Tablet 2, which run Android 4.4.2 KitKat and come with 16GB of storage, expandable to 64GB with a micro SD card.

Apart from the operating system, the Android tablets are distinguishable by their platinum gray finish, and slightly longer battery life of 18 hours.

In complete honesty, although I was initially skeptical about the design – in which the battery is weighted down the spine of the tablet – the Yoga Tablet 2 is likeable, and, to a large extent, practical.

Lenovo have added a hook into the sturdy built-in stand, meaning the Tablet can be propped or hung from almost any angle, which is certainly a big plus.

Of course, there are inevitable flaws that come with the unique design. Finding a case that could accommodate the Yoga Tablet 2’s chunky spine – aside from Lenovo-made ones – was near-on impossible, limiting the product in this respect.

It must also be noted – although this didn’t bother me that much personally – that the tablet is slightly more awkward to hold when held vertically.

However, one thing that did was the long wait for it to charge, which is certainly frustrating.

Activated via an upward swipe, the pop-up control centre is a neat tool that Lenovo have added, allowing for shortcuts to display and audio settings.

Also new is the multi-window feature which can displays up to four apps, whose size can be adjusted once on the screen. They’ve also introduced their ‘e-frame’ app, which turns the tablet into a digital phot frame; a nice touch.

Call me picky, but the standby button does occasionally take several seconds to bring the device to life.

A valid gripe for the impatient user that is yours truly.

On the whole, the Yoga Tablet 2 represents a solid effort from Lenovo. They’ve upped the ante from the previous range.

Although Windows 8.1 may be unpopular, giving the option of both OS’s provides wider consumer choice, while the expansion of the battery-cum-kickstand design is a subtle but neat addition, while the boost in screen resolution is entirely welcome.

Still, once you factor in the cost of $249.99 and $299.99 for the 8-inch and 10-inch models respectively, what is relatively reasonable but not outstanding value, especially given the larger model has the same resolution as its 8-inch sibling.