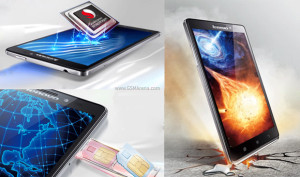 In a flurry of budget also-ran device releases from Lenovo, the newly-unveiled Vibe Z stands out. Not only is it the company’s first LTE-compatible phone, it also boasts some quality mobile innards to boot.

Most US consumers are probably only scantly aware that Lenovo, the Chinese-based manufacturer best known for laptops, even makes smartphones. And there’s a reason: The company’s mobile offerings haven’t been anything special, and only a handful have actually made their way to the US market.

Lenovo has no stated plans to introduce its latest round of smartphones into the US market, which is unfortunate. From a spec viewpoint, that new Vibe Z is right up there with other marquee handsets.

The Jelly Bean 4.3-fuelled Vibe Z is powered by a quad-core Snapdragon 800 2.2Ghz processor, 2GB of RAM, and 16GB of internal storage. It also comes with an impressive 13-megapixel rear shooter, and a 5-megapixel front camera.

Overall, while the Vibe Z isn’t on the bleeding edge of mobile, it certainly is on the cutting board – at least until the 2014 generations of handsets make their debuts.

To reiterate: the Vibe Z will only be available in a few Asian markets at launch. Of course, even if the Vibe Z were to attempt to compete in the US, its hefty off-contract $549 price tag would have to come down, as top-shelf handsets like the Moto X see their price tag fall under $400 .

In addition, Lenovo announced three lower-spec (and lower-cost) non-LTE handsets that the company didn’t even bother bestowing with a proper, non-industrial name.