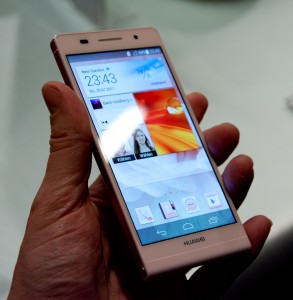 The key feature of the Ascend P6 is its design. At just 6.18mm thick, Huawei says the device is the world’s slimmest smartphone. It’s also very light at 120g.

The Ascend P6 has a metallic body so it is a closer comparison to the HTC One rather than a device like the Samsung Galaxy S4.

It will be available in black, white and pink colour variants and Huawei will sell a range of matching colour cases.

The Ascend P6 has a 4.7in display with a 720p resolution of 1280×720. It won’t display the same crisp text as full HD screens but the difference is minimal.

Like the Nokia Lumia 920, the Ascend Mate’s screen can be touched when wearing gloves.

The front camera is aided by an auto facial-enhancing setting, while the rear-facing 8-megapixel camera has an f2.0 aperture, a 4cm macro view, and a panorama mode. It also doubles as a full HD video recorder.

The Huawei Ascend P6 is powered by a 1.5GHz quad-core processor, has 2GB of RAM and comes with 8GB of internal memory.

A microSD card slot allows users to expand the memory. The Ascend P6 will work on all Australian 3G networks, but it’s not a 4G-capable device.

The Emotion UI doesn’t include an applications drawer, so all apps sit either on the home screens or the dock.

The Huawei Ascend P6 will launch in China from June and should be available in Western Europe from July.