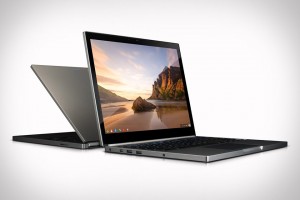 Anyone who thinks the Chromebook Pixel is a ludicrous idea hasn’t actually tried one – or at least that’s our theory after using the high-end Chrome OS laptop over the past few days.

In fairness, the $1,300 Chromebook Pixel does seem pretty crazy on the surface. You can get many of the same specs in a Windows PC for a lot less money, and without sacrificing the ability to install desktop software. You can also spend $200 more and get a Macbook Pro with Retina display. And for the same money as the Pixel, you could buy no fewer than five Series 3 Chromebooks from Samsung and still have $50 left over.

But none of those options would give you quite the same experience as the Chromebook Pixel, with its 12.85-inch touchscreen and Retina display-esque 2560-by-1700 resolution. You’d also have a hard time finding anything with this build quality. The Pixel is one of very few laptops that stands toe-to-toe with a MacBook in fit and finish.

Now, we’re not entirely sold on the Chromebook Pixel. Despite its many alluring qualities, it’s still a bit too pricey for what it does, and its battery life – discussed below – is a deal-breaker for us. But after living with a Pixel on loan from Google, the idea of a luxury Chromebook doesn’t seem so misguided.

Performance: It’s all about the screen
The Pixel’s display is gorgeous, with a 239-pixels-per-inch density that’s higher than that of any other laptop. The screen is glossy, but not obnoxiously reflective. You can tilt the screen or view it at off-angles without washing it out. Blacks are so deep that they almost – but not quite – blend into the laptop’s black bezel.

As with any device with this fine a screen resolution, you won’t see individual pixels at normal viewing distances. And with a screen ratio of 3:2, you can see a bit more of Web pages than you would on a laptop with a 16:9 or 16:10 display.

I suspect that Google specced the Pixel with a Core i5 processor because it wanted Intel’s integrated Intel HD Graphics 4000 GPU to drive the machine’s display. In actual performance, Google’s machine doesn’t feel like a huge leap over Samsung’s Series 5 550 Chromebook, which combines a Celeron processor with the same 4GB of RAM as the Pixel. In our ordinary work-related use, which requires some dozen open browser tabs for writing and researching stories, the Pixel never skipped a beat.

It was possible to find the Pixel’s limits. In 3D games like From Dust, the action got pretty choppy, and the browser-based MMORPG Realm of the Mad God wasn’t nearly as smooth as it is on a desktop PC. Also, the newfangled touch response on the Pixel could be a lot better. There’s a noticeable lag between swiping your finger and seeing the result – more so than just using the trackpad.

Design: Thoughtful touches abound
Why is the Chromebook Pixel so expensive? Part of it might be due to all the little details that don’t show up on a spec sheet.

One example: The lid has a thin strip of light that beams blue when the laptop is running. Snap the lid shut, and the strip briefly flashes the Google colors – green, yellow, red and blue – before fading out. Of course, this won’t help you get work done faster. It exists only to deliver a dose of satisfaction every time you put the laptop away. And it works.

Other flashes of craftsmanship are more practical. A magnetic latch helps snap the laptop closed, for instance, and an indicator on the charge cable turns from glowing yellow to green when the laptop is full of juice. The hinge on the back side of the laptop actually doubles as a Wi-Fi extender as well as a heat sink (although in our use, the Pixel still ran pretty warm on its underbelly).

And then there’s the design of the Pixel itself. It’s a handsome slab of technology, one that’s less bubbly than Apple’s Macbooks, thanks to its sharp corners and completely flat lid. The lack of tapering around the edges does make it look a bit bulkier than it actually is. But rest assured, in real-world use, it’s quite comfortable.

The real stars of the show, however, are the Pixel’s backlit keyboard and glass-covered trackpad. It’s rare to find a laptop whose input features compare favourably to those of a MacBook, but we’ve enjoyed every moment of pointing, clicking, and typing on the Pixel. Sure, a three-year-old Windows laptop technically can do more things than this one, but its cramped trackpad and squishy keyboard would be far more frustrating to actually use.

At a time when tech specs don’t mean the world to the ordinary user, these design flourishes can make a big difference.

Battery blues
If there’s one major complaint we have about the Chromebook Pixel so far, it’s the battery. The power demands of the high-resolution display definitely take their toll, as the Pixel barely lasts more than five hours on a charge at about 60 percent brightness.

That’s not horrid for a modern laptop, and not even unusual for a Chromebook. Samsung’s Series 5 550, for instance, gets about six hours, while Chromebooks from Acer and HP get about four hours. But none of those devices cost anywhere near $1,300. For a premium laptop like the Pixel, we’d expect something closer to all-day battery life. Add the Pixel to the pile of devices whose battery life will someday, hopefully, be saved by next-generation processors.

The $1,300 question
The common argument against all Chromebooks is that other laptops – whether they run Windows, Mac OS X, or Linux – can do more. But “more” isn’t the same as “better,” and the truth is that the vast majority of laptops don’t provide a better Web browsing experience than the Chromebook Pixel. You may laugh at that statement, but a Web browser can be pretty useful. You just need to eschew Word, iTunes, and Photoshop, and embrace Google Docs, Google Play music, and Pixlr instead.

The Chromebook Pixel doesn’t make a strong enough argument to sway us away from the MacBook Pro with Retina display, which, lest we all forget, can run both Mac OS and Windows. The price gap isn’t big enough, the battery life is worse, and the benefits of the touchscreen are minimal. Indeed, as much as we’ve enjoyed using the Pixel, we won’t be buying one. The niceties are there, but the value proposition isn’t, not quite.

We will, however, be eager to see how Google advances the luxury Chromebook concept. Crazy as it seems, it just might work.