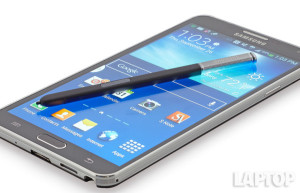 They say that good things come in small packages—diamond rings, the crown jewels, keys to an exotic villa. A quick look across the consumer tech market shows that in recent years, devices are being built to be compact as well as powerful.

Granted, the Samsung Note 3 can just about fit in your pocket, but as smartphones go, it’s big. With a 5.7-inch screen, your initial reaction will be one of puzzlement, but in time the allures of greater productivity and better usability are highly addictive.

It’s about as big as a smartphone could be before it would be an undersized tablet or an oversized phone; a phablet.

The Note 3 runs on a Qualcomm Snapdragon 800 quad-core processor, clocked at 2.3 GHz, but it’s the first to combine the S800 with an impressive 3 GB of RAM. The 32GB of storage is expandable via microSD card for up to 64 GB more.

Just like on the Note 2, an IR port allows the Note 3 to double as a universal remote.

The Note 3 comes with a USB 3.0 cable, the first smartphone to offer this. Like previous Galaxy-series phones, the USB port is also MHL-compliant, meaning you’ll be able to output video and audio to a TV with the right cable. The only downside is this doesn’t come with the phone.

The advanced S Pen functionality is longer than what was offered in the Note 2, and gives it an edge in terms of productivity. If you’re a fan of Android 4.3 then there isn’t really anything better on the market that runs the system.

The Action Memo app lets you use handwritten text on the display to initiate actions, like making a phone call, opening a web browser or creating a task, amongst various other things. This is a nifty addition to the device, and removes the need for tactile comfort in the form of pen and pad.

The Note 3 has superb stamina; you have to try your utmost to drain its battery, but when left more or less idle it can survive for days.
Samsung hasn’t really changed anything in terms of handling since the last generation, other than shaving a millimetre off both the thickness and width.

The phone’s plastic-leather imitation backing is slightly tacky, and if you’re a gadget purist, it’s unappealing.

You have to hand it to Samsung, the Note 3’s 1920 x 1080 Full HD Super AMOLED display is excellent, and the 13 megapixel camera gives it a professional feel. Having said that, the quality does tend to dip when in low light.

In terms of apps you won’t go short, Play Store has almost everything you need.