There are two Motorolas: One is the Google subsidiary that gave us the excellent consumer-focused Moto X, and the other is the Motorola of yesteryear, desperate to give carriers what they want. It’s the second Motorola that brings us the Droid Ultra, star of the new line of Droid phones on Verizon. 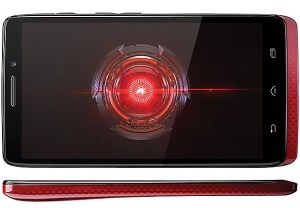 Whereas the Moto X feels personal and well crafted, the Droid Ultra feels corporate and cheap next to its Google-influenced cousin. In many ways the Droid Ultra is a phone designed by Verizon for Verizon’s needs, the result of what happens when a phone maker puts carriers before customers.

At the Moto X launch event, Motorola spent a substantial chunk of its presentation detailing how the phone was designed to fit perfectly in a person’s hand. I wish some of those engineers and designers had wandered over to the other side of the building to help out with the new Droid family of devices. Although the Droid Ultra is easily the thinnest smartphone Motorola has ever produced, its boxy shape and wide frame make uncomfortable to hold. It won’t immediately kill your hand when you pick it up, as some larger models might, but you’ll definitely feel your hand muscles start to fatigue the more you use it.

The Droid Ultra’s plasticky body feels sturdy enough, but the phone suffers from the same problem as the Samsung Galaxy S4: It starts to feel gross and greasy after you’ve held it for a few minutes. It has a larger screen than the Moto X (5.0 inches versus 4.7 inches), but keeps the same 1280 by 720 resolution as its Googley cousin. The display isn’t as pixel dense as those on other competing smartphones such as the HTC One or iPhone 5, but you won’t strain your eyes while reading news articles or lengthy email messages.

One particularly irksome aspect of the phone is Motorola’s decision to use physical navigation keys, as opposed to the virtual ones on the Moto X and last year’s Droid Razr models. Whenever you want to launch Google Now, you have to hold the home button for a few seconds, which takes longer than simply swiping your finger up from the bottom of the screen as you can on the Droid Razr Maxx HD.

Another odd design choice: The volume rocker doubles as the SIM card slot cover. To access your SIM card, you need to pry off the volume rocker, which requires you to have strong fingernails or a handy pair of tweezers. The good news is that the SIM card slot is firmly locked in, so you don’t have to worry much about the phone losing its reception just because you were hammering on the volume keys. The bad news is that you’ll have to apply some elbow grease if you ever want to access your SIM card. 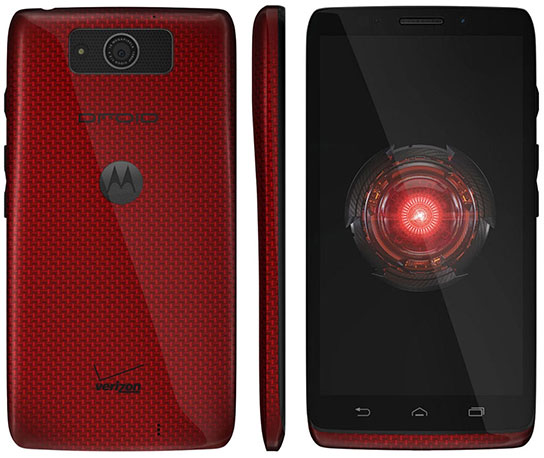 Specs (still) don’t matter
For all the faults in its design, the Droid Ultra performs exceptionally well. The phone has the same 1.7GHz dual-core Snapdragon S4 processor that’s in the Moto X, and it uses Motorola’s 8X system architecture for faster natural-language computing. Although a few people will scoff at the Droid Ultra’s lack of a quad-core processor, I honestly didn’t notice much difference in performance while switching back and forth between the Droid Ultra and the GPE Samsung Galaxy S4. Games such as Riptide GP 2 ran great on the Droid Ultra’s “lesser hardware,” and you won’t notice any lag when using the device.

Motorola rates the Droid Ultra’s battery life at 28 hours of mixed use, and in our own battery tests we managed to squeeze out 7 hours of screen-on time. The phone can easily last an entire day on a single charge, though power users will probably need to keep a charging cable handy. The Moto X, which is rated for 24 hours of mixed use, actually scored higher in our battery tests, with a screen-on time of 9 hours, 13 minutes.

Calls that I made over Verizon’s network sounded hollow and uneven, and several times I struggled to hear what the person on the other end of the line was saying. Thankfully the Droid Ultra’s data performance was up to par–so you should have no trouble using the phone to browse the Web or download apps–but the substandard call quality is something to take note of if you plan to use this phone as, well, a phone.

Audio played through the phone’s rear speaker sounds tinny and warped, so you should stick to headphones whenever you want to listen to Daft Punk’s latest album. (No one wants to hear you blasting “Get Lucky” in public, anyway.) The Droid Ultra comes with a little less than 10GB of usable storage right out of the box and has no MicroSD card slot. You’ll probably want to upload tunes to Google Play Music or use a service such as Spotify to get your entertainment on the go.

A Moto X by any other name

The Droid Ultra boasts the same features found in the Moto X and then some. You can quickly launch the camera by flicking your wrist, and the phone is always listening for the magic words, “Okay, Google Now,” even when the screen is turned off. The screen will pulsate whenever you get a new notification, and the phone comes preloaded with Moto Assist to automate certain tasks. It’s all the features we know and love in a larger and less attractive package.

Unlike the Moto X, though, the Droid Ultra comes with a small amount of bloatware. Aside from the usual cavalcade of Verizon-branded apps, you’re saddled with unremovable versions of the NFL Mobile app and Amazon’s suite of apps. You’ll also find the new Droid Zap app, which acts a lot like the AirDrop feature in the upcoming iOS 7: By swiping two fingers up the screen, you can send content to other phones nearby that also have the app installed. It’s useful if all your friends are using Android phones and are willing to download the app–but the truth is, you’ll probably just email or text the content to them instead.

The Droid Ultra ships with Android 4.2.2 Jelly Bean, but Motorola says that the phone will be updated to Android 4.3 sometime in the coming months.
The camera leaves us feeling blue

The 10-megapixel camera on the Droid Ultra is the same as the one on the Moto X. It has an RGBC sensor that uses an especially clear pixel to let in more light than traditional smartphone camera sensors, a technology that is supposed to help take better photos in low-light environments. The photos we took in our tests weren’t very impressive, however, and many of them had the same issues we encountered on the Moto X, producing a bluish tint and lifeless low-light shots.

The camera app is a departure from stock Android and lets you capture a photo simply by tapping the screen. You can bring up the camera menu by swiping in from the left edge of the screen, but the gesture didn’t always work for me, and sometimes it caused the camera to take a picture instead. The phone records video in 1080p, but the video quality is mediocre at best and probably shouldn’t be used for anything other than Vines and YouTube videos.

Bottom line
Seemingly designed to put carrier interests first, the Droid Ultra feels like the antithesis of the Moto X. Its cold and uninviting design does little to make the device stand out from the countless other black slabs that rival smartphone makers have released, and it lacks the personality and charm of its Google-influenced cousin. Their shared specs and features serve only to further underscore the idea that the Droid Ultra is a Moto X without a soul, and it lacks a lot of what makes the Moto X so endearing.

This phone is so mediocre that I have to wonder whether Motorola purposefully created a bland smartphone to make the choice between this and the Moto X that much easier. With both phones retailing for $200 with a new two-year contract, I see no reason why you’d choose this one. If you go with the Moto X, what trade-offs you make in screen size and thinness you get back with much less carrier bloat and a design that’s more comfortable to use. Skip the Droid Ultra and pick up the Motorola phone you’ll enjoy using more.