Generally regarded as the first commercially available microprocessor, the Intel 4004 – released in 1971 – was a 4-bit central processing unit (CPU), which began retailing at a price of $60. 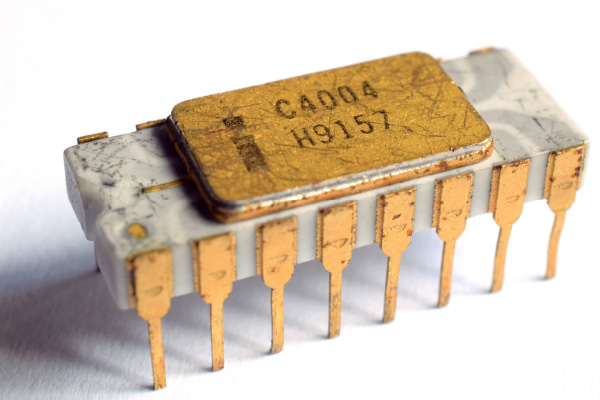 The chip design began in April 1970 under Federico Faggin, who originally developed the silicon gate technology (SGT) in 1968 at Fairchild Semiconductor.

As SGT was his own invention, Faggin was able to use it alongside his methodology for a design that made it possible to implement a single-chip CPU with speed and power dissipation.

Designed as part of the MCS-4 family, the 4004 processor worked alongside a supporting read-only memory (ROM) chip for the custom applications programmes, a random-access memory (RAM) chip for processing data, and a shift-register chip for the input/output (I/O) port.

This revolutionary microprocessor, just the size of a fingernail, delivered the same computing power as the first electronic computer built in 1946, which filled an entire room.

The 4004 was originally custom-built for Busicom; a Japanese firm which enjoyed the first commercial sale of the fully operational chip in March 1971.

Three other CPU chip designs were developed at about the same time: the Four-Phase System AL1, done in 1969; the MP944, completed in 1970 and used in the F-14 Tomcat fighter jet; and the Texas Instruments TMS0100 chip, announced in September 1971.