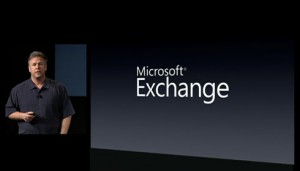 Microsoft is set to demonstrate the reasons it believes enterprises need to adopt the new version of its Exchange email server at a conference this week devoted to the product.

On Monday, the company focused on security, management and compliance issues, trumpeting a number of new and improved features on Exchange 2013 in these areas.

“This is our first real opportunity to talk about the new Exchange,” said Michael Atalla, Microsoft’s director of product management for Exchange, in an interview after delivering a keynote at the Microsoft Exchange Conference (MEC) in Orlando. Microsoft last held MEC 10 years ago, according to the company.

Exchange 2013 is in beta testing and Microsoft hasn’t given an official date for its commercial availability.

Its cloud-based counterpart, Exchange Online, which is part of the Office 365 email and collaboration suite, is also being enhanced in lockstep with Exchange 2013.

The products, which have been available for user testing since July, will have full parity of features, except in the case of functionality that is relevant to have only either on premise or in the cloud, Atalla said.

The new Exchange comes with a data loss prevention (DLP) capability that automates the detection, monitoring and protection of sensitive content and data on email based on pre-established policies, rules and exceptions. The DLP functionality can trigger a variety of actions, including stopping an outbound message or placing it in a moderation queue. It can also inform end users about potential violations of company policies regarding the type of data and content they’re allowed to send via email, to promote awareness among employees.

“This is an entirely new category in the new Exchange,” Atalla said.

Cain said that DLP is increasingly important for organisations and that Microsoft is taking a good first step with this feature, which will mainly target the protection of personally identifiable information. “Some organisations, however, will require a more comprehensive DLP service from third parties,” Cain said.

Microsoft has merged the two separate management consoles of Exchange 2010 and the existing Exchange Online, so that IT administrators now have a single Web-based control panel to manage both products, Atalla said. This is particularly useful and relevant as more and more enterprises move from purely on-premise Exchange deployments into hybrid ones, in which some mailboxes and functionality are in Exchange Online and others in Exchange 2013, he said.

“We’re evolving Exchange to let administrators manage both the on premise and online versions from a common set of management tools,” he said.

“We see the new Exchange giving customers the opportunity to move to the cloud on their own terms,” Atalla added.

According to Cain, moving to a browser-based console is a good idea because it creates flexibility for the administrator.

Microsoft also plans to highlight Exchange 2013’s architecture, which allows administrators to keep current and archived messages in the same mailbox infrastructure, as opposed to keeping them in separate repositories. With this “in-place archiving” technology, archived messages are more easily and quickly available to end users, and email management is simplified for administrators, who can address compliance and retention from a single repository, according to Microsoft.

Exchange 2013 also has features to simplify the management of email messages that need to be kept indefinitely in a “tamper proof” manner. Instead of having to move these messages to a separate system, Exchange 2013 administrators can keep them in the same system as the other messages by applying “hold” policies to them, either at the end user, group, mailbox or individual message level.

The new Exchange also has expanded e-discovery features, including the ability of compliance officers to not only search for Exchange messages, calendar entries and contacts, but also SharePoint documents, sites, files, wikis and blogs, as well as Lync instant messaging conversations, Atalla said.

As in other areas of enterprise messaging and collaboration, Microsoft faces a variety of competitors like IBM Lotus, VMware’s Zimbra and Google’s Apps, which is in the process of gaining native email security, archiving and compliance features via an ongoing integration of Postini services and technology.

Google remains the main competitive threat to Microsoft in enterprise email. “The only other email vendor we see being consistently successful in landing new enterprise email business is Google,” Cain said.