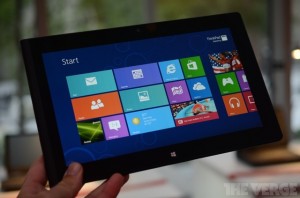 Lenovo has announced the ThinkPad Tablet 2, which kicks off a new generation of the company’s PCs and devices with Microsoft’s upcoming Windows 8 operating system.

The tablet will weigh less than 600 grams and measure 9.8 millimetres thick with a 10.1 inch screen. It will come with Intel’s Atom processor code-named Clover Trail and will be released in October with the Windows 8 Pro OS, which has been optimised for touchscreens. Microsoft will ship the Windows 8 OS on October 26.

Pricing for the tablet will be announced closer to the date of launch, a company spokeswoman said.

The tablet is the successor to the original ThinkPad Tablet, which started shipping in the middle of last year with Google’s Android 3.1 operating system and ARM processor. With the new tablet, Lenovo is switching over to Wintel, which is dominant in PCs but not yet established in tablets. Prototypes of the new ThinkPad Tablet 2 were shown in June at the Computex trade show in Taipei.

The device is for office and home use, Lenovo said. Depending on the country, the tablet will come with optional 3G and 4G connectivity options. An optional keyboard and dock can be attached to turn the tablet into a PC.

The tablet has a fingerprint reader and can be remotely managed. For example, IT managers can remotely deploy applications and prevent users from installing specific applications. A whole range of Windows management tools can be used with the device, Lenovo said.

Lenovo worked closely with Intel and Microsoft to make the tablet. Lenovo is switching over to an Intel chip for the tablet because of the backward compatibility it provides with existing Windows programs on PCs. That is an important feature that will make the tablet an easy fit in corporate environments.

Tablets with ARM processors running Windows RT are also due to be released by companies like Acer and Asus, but those devices will not run existing Windows applications.